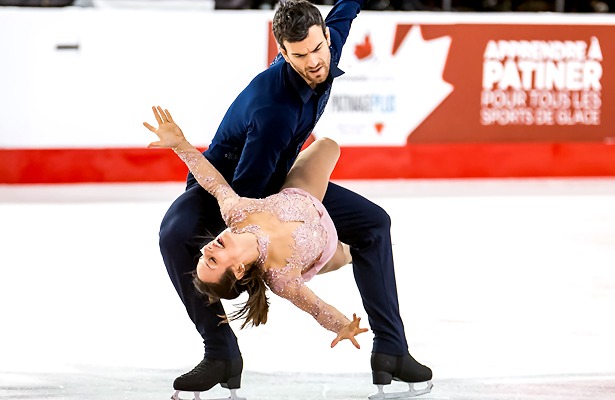 World champions Meagan Duhamel and Eric Radford claimed their sixth consecutive national title with a win at the 2017 Canadian Tire National Skating Championships in Ottawa. In a continuation of their up-and-down season of performances and results, their “No, je ne regrette rien” free skate was not without errors.

A strong opening level four triple twist was followed by sharp side by side triple Lutzes-double toe loops. However, the throws were a problem with a fall on the quadruple Salchow and a step out on the throw triple Lutz. Duhamel and Radford won with a score of 146.51 for a total competition score of 227.23. The methodical team was already analyzing the result post skate.

“We started out really well,” Duhamel assessed. “It was the first time we ever actually tried a triple Lutz combination ever in competition, and when we landed that, I could feel a surge of energy boil up. As we went into the throw quad, I had to force myself to calm down, because I know whenever I have a little too much energy, the throw gets a little too big. I think it pulled inside just a little bit, but I am really proud of the recovery to the side by side Salchows. We were trying a throw quad, so sometimes we are going to have stumbles and that just comes with a high-risk element.”

The Salchows were also a feat, the team explained. They inserted them in place of the toe loops after pain developed in Duhamel’s left foot in the autumn.

“It’s what I fell on at the Olympics, so this was my mini redemption from our poor long program in Sochi, so I feel really proud of that actually,” she boasted.

Striking a sharp silhouette, Radford sported a new costume in Ottawa. Dressed in navy, the skater made the change from pink which previously matched Duhamel’s dress.

“The other one was, I think, a little bit too pink to begin with, and I think Meagan’s dress is so nice that I could be in a darker, more solid color and just let her stand out and I could be the frame to her,” Radford said of the switch.

“It feels crazy,” Duhamel said of the title six-peat. “When we think back to Moncton in 2012 when we won that first title, our lives changed that night and we could have never imagined what was ahead of us from then until now, the past six years. One more, lucky number seven next year, and then we’ll leave the reigns to somebody else to break our record.”

Liubov Ilyushechkina and Dylan Moscovitch charmed the full-house audience with their free skate set to “When You Say You Love Me” by Josh Groban with their solidly-landed throw triple jumps and twist, but struggled with the side by side jumps as she fell on the triple Salchow and doubled the toe loop.

Their level four lifts showcased her flexibility and helped compensate for the jump errors, resulting in a free skate score of 136.05 and total competition score of 208.24.

“All in all, we did a good job of sticking to our training and skating to the performance. There were obvious mistakes, a couple little wobbles that put us off pattern,” Moscovitch acknowledged.

“It would be a complete lie to say we aren’t aware that we need to place in a certain placement,” he confessed, eluding to the need for a silver medal behind Duhamel and Radford to help guarantee a spot on the world championship team given the unknown status of 2016 Skate America champions Julianne Seguin and Charlie Bilodeau who withdrew from the event given her concussion.

Kirsten Moore-Towers and Michael Marinaro skated their soulful free skate to “Un Ange Passe” by Alain Lefevre with plenty of might on the throws and twist, but she popped the Salchow of the team’s planned opening double Axel-triple Salchow sequence and he stepped out of the side by side triple toe loops.
The performance achieved 128.05 points for a total competition score of 198.74.

“We love the music and we love the story,” Moore-Towers said of her second competition of the season given a concussion in summer training that slowed down her season. “With more experience, we think we will be more successful at telling our story,” she said, hopeful that their season may continue into the Four Continents Championships and World Championships.

Duhamel and Radford set their winning tone early with a clean performance of the short program choreographed to “Killer” by Seal. Sharp and dynamic, the skate featured a level four triple twist, side by side triple Lutzes and throw triple Lutz, earning the team a score of 80.72. The only fault was a slight misbalance in the footwork entering the final death spiral. The team abandoned the throw triple Axel that turned heads in the first half of the season, but was rarely landed cleanly.

“It makes a lot more sense for us to go back and do an accessible short that we know we can do clean,” Radford said of the strategy. “We don’t need to win the short every time. We have a really strong long that we can win the competition with, so it’s just staying in the game.”

“Goal number one was to nail a short program so that we can head into the rest of the season building on,” Duhamel added. “We are extremely, extremely satisfied with that. It is definitely a great step to build on for Four Continents and the World Championships.”

“It was admittedly heart-breaking to remove the Axel because we worked so hard to master a single Axel and then a double and then a triple,” Duhamel reflected. “We’re going to always have that moment when we landed it at Skate Canada, so it wasn’t all for nothing.”

Ilyushechkina and Moscovitch claimed second place in the short program with a routine oozing personality, but she popped her side-by-side triple toe loop. The “Tango Jalousie” short program – featuring a few choreographic tweaks since the grand prix series thanks to David Wilson and Marie France Dubreuil – closed with a charming straight line footwork sequence and earned the team a score of 72.19.

“The most calm we’ve ever done this season,” Ilyushechkina said of the outing. “Unfortunately, when I focus too much on when I want to do something, I tend to rush. That’s what happened on the jump, but overall, everything else was I think well done.”

Moore-Towers and Marinaro laid down a clean routine set to “Heartbreak Hotel” by Billy Joel featuring a level three triple twist, throw triple loop and side by side triple toe loops. The only noticeable error in the routine that was equal parts passionate and playful, was her stumble into their final pose. The team earned a score of 70.69.