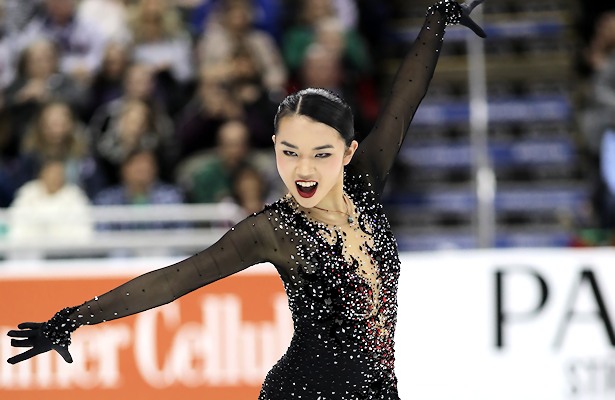 Overnight leader Karen Chen maintained first place, winning her first national title at the 2017 U.S. Figure Skating Championships in Kansas, Mo., on Saturday night. Ashley Wagner moved up one spot for the silver, while Mariah Bell surprised with a third place finish overall for the bronze.

Chen was solid in her routine to “Jalousie ‘Tango Tzigane’,” which featured six clean triple jumps including a triple Lutz-triple toe in the opening and a huge triple Lutz later in the program. The only flaw was a double Salchow instead of a triple on the back end of a combination with a double Axel. Showing lots of character, the teen earned a level four on all of her spins and footwork along with positive grades of execution (GoE). She finished first in the long (141.40) and overall (214.22).

As with the short program, the 17-year-old was in complete shock. “All of this just came together for me,” she said. “It was a rough season. I spent the first couple months working out my boot problems back home in Fremont and working with a new boot company trying to work out all the kinks.  I’m happy with the progress and I hope to keep pushing forward and getting better.”

Confidence has been one area that Chen admits to struggling with. “I’ve always had a lot of self-doubt,” she admitted. “Going into nationals I just really focused on the things I can control and I stopped worrying about all the distractions and everything. I just stayed really focused and tried to do what I came here to do.”

Becoming a U.S. champion was something the skater, coached by Tammy Gambill, only dreamed about. “In a way, it was [so] far from reality that it was hard for me to believe that this day would come. But this day did come and I’m just so excited and thrilled about it.”

“There was definitely a lot of pressure knowing that I skated the short of my dreams,” said Chen. “I wanted to follow it up with a close to perfect long and I put some pressure on myself knowing that winning this thing, or even just getting on the podium, was definitely a huge possibility. I just wanted to chase after that thought and just kept pushing through.”

Wagner was nearly solid in her captivating routine to “Exogenesis: Symphony,” which tells the story of her career. The three-time U.S. national champion landed five clean triples, but slightly underrotated a triple toe on the back end of a triple flip, and singled a toe in combination with a triple Lutz. Nevertheless, she displayed good spins and footwork and finished second in the long (140.84) and overall (211.78).

“Today was a huge accomplishment for me,” she said. “First of all, this was my first nationals silver medal. That’s a big deal for how many nationals I’ve been to. Beyond that, today was really solid. That was what I was going for. From the start of this event, I said I was here to get on that world team and I think that I delivered the two solid performances I wanted to here. I left some points out there on the table. I’m totally okay with that, because I have something to build on top of and I know exactly where I am now and I’m not planning on peaking here. I’m looking forward to moving on to Worlds.”

In regards to Chen and Bell, Wagner feels that we are “looking at something that is very exciting for U.S. Figure Skating.”

“That is something we really haven’t had a glimpse of for the last couple years,” said Wagner, acknowledging both girls at the press conference. “I think this is awesome for skating in general. Beyond that, going into the World Championships, I think it is so easy to be devoured by you guys, because you all have eaten me alive before, and I think that going into worlds the best advice I can give to both of these girls is just tune out the noise and focus on your job. I mean Karen just has to deliver what she did here and Mariah has to do the same and we’ll be set.”

When asked about her staying power and the longevity of her career, Wagner responded: “I’m going to get emotional because this is so hard what I do. I am so proud that I am still here. I was 15 or 16 at my first world championships and I’m here and almost 25. It’s almost 10 years later and that’s something you don’t see often. I love it and I’m so stubborn and my passion is what fuels me and I’m really proud of myself. But I’m always here because I work to be here and that’s something I’m really proud of.”

The possibility of going into the World Championships as a silver medalist works out just fine for Wagner. “I don’t have to deal with all the NBC promos making the me the first place girl going in. This is perfect for me, it gives me the opportunity to go in with my head down and keep on working. I know there’s lots more points and I’m so excited.”

Bell landed six triple jumps, including a triple Lutz-triple toe and triple flip-triple Salchow in her routine to music from East of Eden. The only major error was a turnout and hand down on a triple loop. All three of her spins and steps garnered a level four with positive GoEs, and the 2016 Skate America silver medalist finished third in the long (134.59), moving up from sixth place to third overall (197.92).

“I was very very pleased with my performance today,” said the 20-year-old. “My goal coming in to nationals was just to continue building on my personal best that I’ve grown with, with the season. I’m really proud, because I was pretty nervous going into long, but to be able to do that even with the pressure that I had on myself, I feel really really pleased, and am very excited for whatever’s next.”

Training hasn’t changed much for Bell, who joined Rafael Arutyunyan in August. “Everything’s been consistent,” she said. “No matter what happened throughout the season, I came back and did the same work. But obviously there was a little more talk after Skate America and that was a bit of a buzz here and something that I have never had in my career yet. So, being able to come in and skate performances that I’m really proud of under more pressure than I’ve felt is something that I’m really proud of.”

“I really want to continue building up my technical arsenal,” said Bell in regards to working with working with Arutyunyan. “Honestly, the triple Axel is something I would love to start working on. We talk about it a little bit, but he’s been really conscious with what he’s been doing with me because it’s in the middle of a competition season and you can’t change everything. He’s not planning on changing everything; he just wants to implement more little details that we haven’t been able to really get to yet. I’ve talked to him about it a little bit, and he’s been saying the off-season will be where we can really grow that.”

Mirai Nagasu, who sat in second after the short program, finished fourth in the long (122.95) and overall (194.90). The five-time U.S. national medalist took a fall on a triple Lutz and struggled with underrotations in the last half of her routine to “The Winner Takes It All.” Despite the errors, she delivered on spins and footwork which were all graded a level 4 with positive GoEs.

“This isn’t the way I wanted it to go, but I think that people are defined by how they react to things,” she said. “Hopefully one of our top skaters will pull out and give me the opportunity to go to Four Continents again.”

Gracie Gold finished in a devastating sixth place (179.62) after placing ninth (114.77) in the long program. She nailed a triple Lutz-triple toe in the opening, however, the rest of her routine was riddled with popped jumps.

Caroline Zhang moved up from seventh to fifth place overall (182.82).