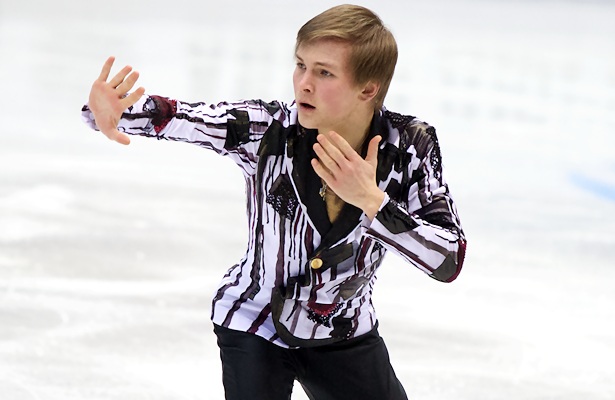 Mikhail Kolyada was Russia’s male shooting star last season when he came in fourth in his debut at the 2016 ISU World Figure Skating Championships in Boston, Mass. This season, the 22-year-old from St. Petersburg was assigned to two Grand Prix events for the first time in his career, and was considered a favorite for qualifying for the 2016-17 ISU Grand Prix of Figure Skating Final.

Unfortunately, the skater missed out when he only placed fourth at Rostelecom Cup and fifth at NHK Trophy. Nevertheless, Kolyada then proved that he is still a force to be reckoned with when he won his first national title with two strong performances last month.

Kolyada was pleased with his performances at Nationals in Chelyabinsk, despite some wobbles and a fall on a quad Lutz in the free.

Kolyada was in the lead after the short and had to skate last in the free, but he dealt with the situation well. “Nobody likes skating last. My warm up was not good. I came off and I rested. I was able to pull myself together and to skate well.”

Even a little incident didn’t distract the skater – in the middle of his free program an advertising video of a sponsor suddenly started, complete with sound.

“When I was in the sit spin, I heard it – ‘interactive TV Rostelecom’ and I thought ‘great,’” Kolyada recalled. “I heard it very clearly. At first I thought that someone in the stands had switched on the sound, and then I realized that it came from the loudspeakers and I was afraid that something was wrong with my music.”

“It was good that it happened in the footwork and spin in the second half of the program, and not during a jump,” he added. “This happened to me for the first time. It was weird. Good that it didn’t throw me off. I smiled and just carried on. Anything can happen.”

This experience taught Kolyada some important things about himself: “Simply when you are in the state of complete focus, it does not matter anymore who shouts from the tribune and what they shout or if something with the music is wrong. Maybe that’s why I just carried on, because of my extreme focus. I didn’t care (about the advertising issue). A person can completely shut out everything in this situation. This is a special condition, when there is a strong physical and mental strain on you. They somehow go together and you are conscious, but in a kind of half trance. It is hard to describe in words.”

The fall on his opening quad Lutz didn’t bother the 2016 Russian silver medalist too much, either.

“My main job was to rotate the jump and not to pop it,” he said. “I don’t forgive myself for popping jumps and I would have blamed myself for that for a long time. Then I did the quad toe. This time it was even easier to go for it than it was in Japan.”

“At the Grand Prix in Japan, after the Lutz (he fell), I skated like after a knock out,” he clarified. “I didn’t understand, what, where, when. I just went for the jump and didn’t see anything around me (he missed). Too bad that the quad Lutz so far only has been working in practice.”

In Chelyabinsk, when he finished his long program to music from Cirque du Soleil, Kolyada had a big smile on his face, however, he couldn’t be sure whether it was enough to win.

“In the free, especially towards the end, I just thought about finishing the program,” Kolyada recalled. “To push through, endure. When everything was over, I just felt happiness that I was able to skate well after all. I did not know at this moment how Sasha (Alexander Samarin) had skated. When I waited for my turn, I heard that he got a lot of applause and cheering. In this moment, I thought, ‘he did a great job.’”

“It is very hard one week after the Grand Prix Final to get ready for Russian Nationals,” he continued, “but I thought that I’m not going to give anything away. My focus was that I had to do everything. It was very upsetting, especially at the Grand Prix in Moscow, when after a good short I gave it away in the long.”

However, there was no doubt that in the end, it was a clear and well-deserved victory over newcomer Samarin and defending champion Maxim Kovtun.

After nationals, Kolyada enjoyed a short rest and time with his parents and three younger siblings as New Year’s Eve is the biggest holiday in Russia. Afterwards, the skater had to get back to work right away. On January 2, he, along with his coach Valentina Chebotareva and other skaters from his group, went to Finland for a training camp.

“After New Year’s, there were some problems with the ice in St. Petersburg,” he explained. “There are New Year shows, public skating on one rink, and at the other rink we all have to skate and are like sardines in the tin.”

The goal for the upcoming 2017 ISU European Figure Skating Championships in Ostrava, Czech Republic, is to skate well, improve on his fifth-place finish from last year, and to land the quad Lutz for the first time in competition. No European skater has yet landed a clean quad Lutz in competition, although a few, including Evgeni Plushenko, have tried.

In practice, Kolyada has produced some amazing quad Lutzes. He doesn’t think that nervousness makes it harder to land a new jump in competition.

“Nerves are not distracting,” he said. “The reason probably is a lack of confidence, for now for this jump. In practice, I just shut out everything else, just went for it and did it. In competition, it is still harder to do that.”

Obviously, the new Russian Champion is a medal contender for Europeans and he wants to be ready for the challenge. “I will prepare for Europeans as usual – maybe even harder than usual,” Kolyada said and smiled.