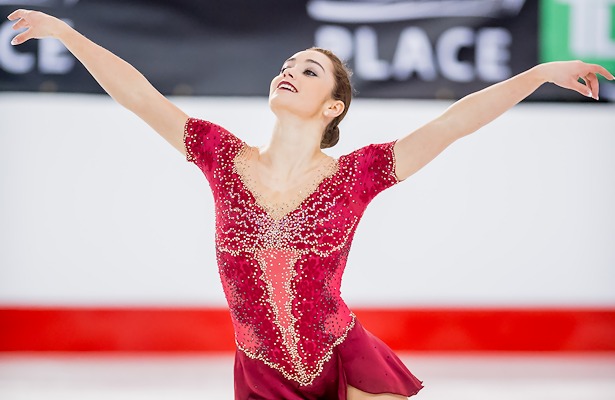 The ladies did not disappoint in the anticipated pressure cooker event. Much like last year, Canada’s elite ladies – Alaine Chartrand, Gabrielle Daleman and Osmond – battled for podium placements and two spots on the world championship team.

Resplendent in red at Ottawa’s TD Place, Osmond managed level four grading on her combination spin and step sequence. She struggled, however, on the triple loop and second triple flip, falling on both, and stepped out of a double Axel.

Combined with her record-breaking short program score, the 2016 Skate Canada silver medalist earned 138.65 in the free program for a total competition score of 219.66.

“Getting my title back is incredible right now,” Osmond said after her free skate. “I definitely wish I did a better program. Missing the loop and the flip are really stupid mistakes for me. Those are my most consistent jumps in practice, so I was really upset about that, but I’m really glad I improved a lot of things in my program. I did the things that I missed at the Grand Prix Final, which also makes me really happy.”

“I am excited to go back for the world championships and definitely I am just looking forward to skating a clean short program and hopefully get those last two triples done, because they’re driving me crazy,” she said, laughing.

Fiesty Daleman powered through seven springy triple jumps in her “Rhapsody in Blue” free skate, even if a couple were imperfect. The triple Lutz with arms above her head was landed with a hand touch to the ice and the 2015 national champion singled the second jump of her planned triple Lutz-double toe loop-double toe loop combination. A tight landing on the triple loop that proceeded the combination conveyed her distraction. All of her spins, however, were level four quality.

The skate earned Daleman 136.05 points for a total combined score of 211.09 that snagged the silver medal.

Defending champion Chartrand, who sustained a sprained ankle in training on Monday, settled for the bronze medal, and likely omission from the two-member world championship team. Nevertheless, she gave a strong effort with a free skate set to music from the Rome soundtrack. Four underrotation calls on jumps held Chartrand back from last year’s golden finish, earning her 114.66 in the frees kate for a competition score of 182.07.

“As much as I am disappointed with my free program, I am proud of my fight and just being here,” she said.

“I am trying to just stay in my own head and trying to stay as confident as I can without being over confident,” she said of the buzz her comeback is creating across the world. “And I love to say that I can compete with the top skaters at the Grand Prix Final. That definitely showed that I can compete against the top there and this program. The way I have been skating it all year, I am really happy about, but I am trying to stay over my feet and not let my head get too high in the air.”

Daleman had the ominous position of skating next, but didn’t show that Osmond’s big number rattled her. She opened with a soaring triple toe loop-triple toe loop combination and later a triple Lutz out of footwork and a sturdy double Axel. She earned a personal best score of 75.04 for her dramatic routine to music by Jules Massenet. Following the performance, she pumped her fists, glanced back at her coaches and clapped in a burst of delight at the clean skate.

“I have skated behind Medvedeva, the world champion,” said the 19-year-old. “I have skated behind many great people, Carolina Kostner, and I just said to myself, ‘That’s not in your control, you have to go out there, you stay in your bubble, you focus on what you can control and what you have been training to do.’”

Chartrand cranked out a triple Lutz-triple toe loop combination in her resurrected “Pina” short program after this season’s “Sway” routine left her uneasy. A sticky triple loop came later and a confident double Axel between sequences of intricate and novel steps garnered the skater 67.41 points.

“That was not my best short program, but it was good and it was enough to keep me in the running,” Chartrand said. “It was tough to skate after two really good skates.”