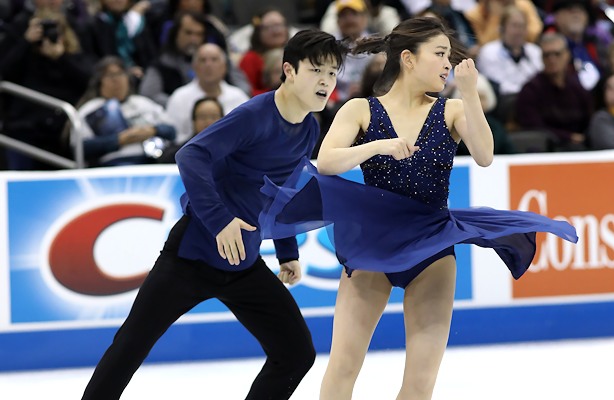 Maia Shibutani and Alex Shibutani won their second consecutive title at the 2017 U.S. National Figure Skating Championships on Saturday. Madison Chock and Evan Bates were a close second (one point), while Madison Hubbell and Zachary Donohue took the bronze. The top three placements have all been selected to both the Four Continents and World team.

Shibutani and Shibutani put out a mesmerizing free dance entitled “Evolution,” which featured solid twizzles and a beautiful stationary lift, which unfortunately received a deduction (extended lift). They earned level 4s and positive grades of execution (GoE) on all elements except for the serpentine steps (level 3). The defending champions finished in second place in the free dance (117.63), but with a total score of 200.05, rose to first overall.

“I’m so proud of how we skated this week,” said Maia Shibutani. “We’ve built so much confidence since a year ago when we won our first U.S. title, so really for us, we feel that improvement and that growth, and the crowd was amazing.”

“We’re really strong competitors, so today was another step in the journey to 2018,” said her brother. “We’re really looking to focus on the second half of the season and push really hard so we can have a lot of momentum.”

Alex Shibutani shared that they had put a great deal of themselves, their thoughts, and creativity into developing the free dance. “I’m really proud of how we managed all the input and knowledge we’ve received from so many people across so many different fields,” he said.

“We’re very pleased with the progression that both programs have made over the course of the last several months, but particularly between Grand Prix Final and this competition,” he added. “There’s a solid chunk of time where we were really focused on making sure that we could really grow the energy in both of our programs, and we’re very pleased with how we were able to accomplish that this week.”

They have time between now and the Four Continents and the World Championships to tweak and improve.

“Those are key competitions,” said Alex Shibutani. “Those are competitions where we really want to be at our absolute best. So while we’re very happy with the way we skated this week, we know that there’s a lot that we can do with our coaches at home so that our performances at those two competitions are the strongest of our season.”

“I think Maia and I have always prided ourselves in our ability to continue to up our game as the season progresses, and so we’re confident we’ll be able to do that this year as well,” he summed up.

Chock and Bates won the free dance (119.08) with their much talked about routine to “Under Pressure,,” which has evolved a great deal since the beginning of the season. The team racked up +3 GoEs across the board for both their rotational and curve lift, and also earned level 4s on all elements except for the serpentine steps (level 3). However, they felt short by a point in their total score (199.04) in their battle for the top of the podium.

“This felt like a really special performance for us tonight,” said Chock. “It felt like we gave it our all and we’re really happy with how we skated. We couldn’t have pushed ourselves any harder. We’re very happy we were able to do this in Kansas City. The crowd has been wonderful and it was great.”

“I think this was our best competition probably to date,” said Bates. “It feels really good to be sitting up here having accomplished that, because we came into the competition, we really just set performance goals for ourselves. It’s what we always do. We would’ve loved to have recaptured our national title, but it didn’t happen for us, but we’re still very proud of the performances we put out this week and we’ll be back next year.”

While Bates doesn’t feel it has been a “disappointing” season thus far, he relayed that they get hung up on results at times. “It truly doesn’t reflect on how our skating has grown and how our partnership has evolved,” he said. “I think if we watch the progression of our skating over even the last 12 months, we’d be really pleased with it.”

In terms of how they feel their performance will continue evolve, Bates feels they have a history of peaking in the second half of the season, in particular, last year at the Four Continents and World Championships.

“We plan to do the same this season,” he said. “We’re going to bring Rohene [Ward] to Michigan again. He’s really been a huge part of our choreography this season. He and Christopher Dean have helped us to come out with a fresh look this season and try just to expand our horizon as far as music selection, choreography, outfit selection, everything. We love you and we look forward to pushing hard toward world championships.”

The ice dancers, who are in their fifth year together, are continuing to find their way.

“It feels like we have a lot of room for growth and a lot of untapped potential,” observed Bates. “I think in order to do something that hasn’t been done before, you need to bring in someone who hasn’t done it in that discipline before. So to be outside the box, you have to think outside the box and Rohene is definitely representative of that. We love working with him. He’s so talented it’s ridiculous and he’s fit right in at our rink in Novi. We’ll have him anytime Kori [Ade] will lend him.”

Hubbell and Donohue showed effortless execution in their “Love” medley routine, however, Hubbell had an uncharacteristic fall (not during a required element) after the rotational lift.

“It was just a super strange fluke that caught me off guard,” said Hubbell. “My blade caught the toe pick. I was pretty surprised. One second I was up and the next I was down. We did a pretty good job of keeping it together after that, which is a testament to our training.”

Nevertheless, the team resumed with a beautiful straightline lift with encouragement from the crowd. The team earned a level 4 on all elements except for a combination spin and circular steps (level 3), along with many positive GoEs. Then finished third in the free dance (111.70) and overall (191.42 ) to win their fourth bronze medal.

“It wasn’t our day,” said Hubbell. “My day in particular. I just want to say thanks to Zach for being a fabulous partner. I think we were able to finish strong. I thank my lucky stars to have a partner to help me through a moment like that.”

The team will continue to work and improve on their elements before the next competition. “We also have the freedom really let ourselves get lost in the performance,” said Hubbell. “I think that we want both of our programs to be entertaining for the audience and the judges and to be so consistent that we really feel that freedom.”

In their senior debut at nationals, Elliana Pogrebinsky and Alex Benoit placed fourth (103.12) with their “Persian Legend” free dance, moving up one spot to fourth overall (170.29). The team earned level 4s and positive grades of execution on all their elements except for their serpentine steps (level 3).

The team felt that it was a great continuation of their short dance.

“It’s hard to put into words, really,” said Benoit. “Kansas City is so great, the people here are so excellent, there’s so much energy and I said it last night, but I’ve got to say it again: it feels like they’re all down there on the ice with us. Just that feeling of support. What we strive for in skating is that split second of connection that you get with the audience, that’s why we do it. Obviously, we strive to be the best we can be and it’s athletic, but when we get to share that moment, I mean it really makes it all worth it to us. It doesn’t matter what the points are, it’s just were there and we’re having such a great time together and we feel it with the audience.”

The ice dancers feel fortunate that they are able to train with “incredible skaters” every day.

“When you get on that ice with them, it really drives it home that this is it, this is what we do, this is what we’re training for,” said Benoit. “The four minutes we get to spend on the ice. Both of us, one of our favorite skaters is Tanith Belbin [White], and last night she was talking about us. It’s the weirdest thing. It’s surreal. You have that moment just beside yourself, out of body, where you’ve been working the past decade and a half. It’s really special.”

Kaitlin Hawayek and Jean-Luc Baker, who stood in fourth after the short dance, suffered rare falls in what was otherwise a beautiful performance to Liebesträume. The team had a strong start with level 4 circular steps, however, Hawayek lost her balance and fell during a choreographic feature in the twizzle sequence. They also went down during a straightline lift when there was too much rotation and Baker fell out of the spread eagle position. They finished eighth (87.46) and slipped to fifth (160.06) overall.