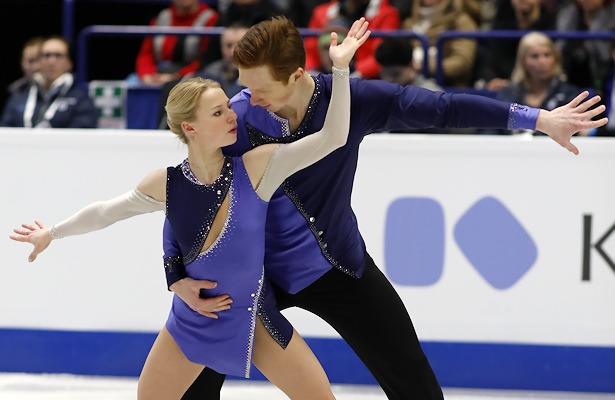 Evgenia Tarasova and Vladimir Morozov continued the Russian dominance in the Pairs event, claiming the 46th gold medal in the discipline for their country at the 2017 ISU European Figure Skating Championships in Ostrava, Czech Republic. In what was a high-level event, Germany’s Aljona Savchenko and Bruno Massot fought their way back from injury to take the silver medal, while Vanessa James and Morgan Cipres of France celebrated a breakthrough with the bronze. Only a few points separated the top four teams from each other.

Tarasova and Morozov led the field with a six-point advantage over James and Cipres following a crisp short program with excellent elements. In the free, the two-time European bronze medalists decided to play it safe and did not go for their quad twist, but did a level-four triple instead. The Russians followed up with a set of side by side triple Salchows, triple toe-double toes and excellent triple throws.

Just towards the end of their program to “Music” by John Miles, Morozov seemed to run out of steam a bit and struggled with the last lift. Nevertheless, the three-time Russian national medalists set a new personal best in the free (146.76) and took home the gold with 227.58 points.

“I think today was great day for all of us,” said Morozov. “We had a good skate and a good place. I think we did a good job. We skated well and we had a lot of fun.”

Morozov explained that their coach, Nina Mozer, decided that they should not do the quad twist. “We had a problem in practice last week, and we trust our coach. Nina said to do it like this (doing a triple instead of a quad), so we did,” he shared. In fact, the couple had a hard fall on a lift in practice at home in Moscow.

For Savchenko and Massot, the silver medal shone like gold. A few days before Europeans, the defending silver medalists didn’t even know if they were going to compete in Ostrava. After Savchenko had injured her right ankle at the Trophee de France in November, she resumed practice of the throw jumps only a week before the championships. Additionally, the team lost some training time as first he, and then she, came down with a cold.

The World bronze medalists reduced the difficulty of their throws, doing a throw double Axel and a throw triple Salchow instead of a triple and quad. The throws went well, but Savchenko fell on the step sequence in their popular Lindy hop short program and they stood in third (73.76) going into the free skate.

“I was probably too happy that it was going so well and I relaxed too early,” Savchenko analyzed, regarding the fall.

In the free, the team put out a magical performance to “Lighthouse” by Patrick Watson, smooth and soft and with high quality elements. The crowd gasped when Massot threw his partner high into the air for the triple twist and applauded for each element they did, whether it was a jump, a lift or a spin. Massot doubled the second jump in the toe-toe sequence, however, all other elements were strong. Three judges gave the German-French team a perfect 10.00 for composition.

“For me, this silver medal today means more than gold,” said Savchenko. “Every medal has a special story, every year is a different year, every year there’s something behind. It’s amazing memories. I am really happy for today too. We came here with a bit softer programs.”

“She still feels the injury, but we have worked on other elements and choreography,” said Massot. “We wanted to bring across more emotions and I think we were successful in that.”

The Trophee de France champions won the free skating, earning a personal best (148.59) en route, and moved up one spot at 222.35 points.

For James and Cipres, the bronze was a dream come true. They had come close to the podium before, but this was their first championship medal. The French turned in two strong performances and were the only team to risk a quad, the quad throw Salchow, that she two-footed but rotated. They were second (74.18) after the short and slipped to third in the free with 220.02 points.

“We were not expecting anything really, especially today, because two years ago, we were third in the short program and then we had a catastrophe,” said James. “I forgot the program in the long program, but we have learned from this. Today, we just stayed very calm and focused on what we had to do, on what we’ve been doing in practice. I told Morgan after the program, it doesn’t matter what the result is, because I am very proud of us. I wasn’t waiting for it, I didn’t want to expect anything. I was prepared for anything and just to fight. We’ll continue to progress I hope.”

Ksenia Stolbova and Fedor Klimov of Russia competed in their first international event this season as she struggled with periostitis and was out for eight months. Not surprisingly, the 2014 Olympic silver medalists were not in top shape yet and Stolbova missed the throw triple flip in both programs. They came in fourth at 215.51 points.

“We cannot change what happened,” Stolbova added. “We missed the first half of the season because I was injured. We wanted to show the best performance and kept our focus on the elements. I would like to thank all the people who supported me and helped me after I got injured.”

Teammates Natalia Zabiiako and Alexander Enbert gave two solid performances with the only major mistake being her popped Salchow in the free skate. The national bronze medalists placed fifth (200.75) in their debut at Europeans.

“Basically, we are satisfied with everything in our program today,” Enbert told the press. Of course, there is always something to improve, but generally there was nothing going wrong today. We need to work especially on one jump before the worlds. The target in Helsinki will be to show a clean performance without any mistakes.”

Italy’s Valentina Marchei and Ondrej Hotarek were strong in both programs as well. Only her solo jumps in the free were a bit wobbly. They finished sixth (191.93).

“I fought through the whole program,” said Marchei. “There was so much thinking going on in my mind. It makes me mad that I did the pairs’ elements that I have learned only a few years ago, but as for the singles’ stuff, I couldn’t get it right.”

The day of the short program marked Hotarek’s 33rd birthday and he received a cake at the draw for the free skating.

World Junior champions Anna Duskova and Martin Bidar of the Czech Republic celebrated a successful debut at the European Championships. Bidar missed the triple toe in the short, but the team came back with a clean long, nailing all their elements to finish seventh.

“I am so excited I cannot even speak,” said Bidar. “In the end, I could not even hold up my arms, I was totally exhausted. If the fans did not cheer for us, I doubt there would be the second lift. We almost got deaf from the fans’ screaming.”

“The result is not important for us today,” he continued. “I am happy we showed our best. After this experience, we get back to training. We will work even harder, because the world championships will be even harder with all those pairs from other continents.”

Zoe Jones and Christopher Boyadji of Great Britain were 14th out of 16 pairs in the final, but they have a special story. Jones, 37 and a mother of three, only started pair skating less than a year ago after retiring from competitive skating in 2001. The British Champions showed a triple toe-triple toe sequence and double Axel, as well as two triple throws.

“Overall, there was a great crowd,” said Jones, adding that Ostrava was friendly. “It was an amazing comeback on the big stage. I am glad we were able to team up. When I heard that Christopher broke up with his partner, I contacted him not expecting any answer. Of course, it is a big change after competing in singles. We are still learning.”