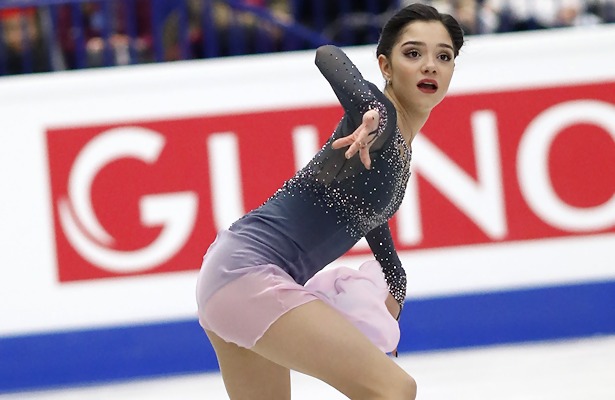 Russia’s golden girl Evgenia Medvedeva once again reigned supreme and cruised to gold at the 2017 ISU European Figure Skating Championships in Ostrava, Czech Republic, on Friday. In what was an exciting competition, Anna Pogorilaya of Russia claimed the silver medal, her first after two bronze finishes in the event. However, the biggest story was the successful comeback of Italian legend Carolina Kostner, who earned the bronze – 14 years after taking her first medal at an ISU Championship, also a bronze, at the 2003 ISU World Junior Figure Skating Championships in Ostrava.

When watching 17-year-old Medvedeva competing and practicing, it appears as if she makes no mistakes. The World champion skated to the lead in the short program with an excellent performance, but did not break her own record score as she had hoped.

Going into the free skate the 2016 World champion was determined to do better, and she did. The skater threw in triple-triple combinations easily and just performed beautifully to music from Extremely Close and Incredibly Loud. The only jumping pass didn’t work out the way the Muscovite planned was the triple Salchow-triple toe-triple toe combination. Like at Russian Nationals, she knew the last toe would not count. However, since the first toe after the Salchow was a bit shaky, she couldn’t do it and tacked the extra triple toe on to the next jump, a double Axel instead. Medvedeva looked unstoppable and enjoyed every second on the ice.

“I was in a good mood today, everything felt fantastic – ice, audience, skating,” she said. “I just realized how much I like this competition and wanted to enjoy it to the fullest. You could really feel the support of the audience in this arena. After every jump that I did, I could hear their reaction. Then, it was so nice to see this standing ovation at the end of my skate. Each time, this is an incredible feeling. I am working for these moments, like the feeling after a clean skate and being on the podium and listening to the anthem. These moments are not very long, but they are worth all the hours that I am working on the ice every day.”

The Russian broke her own record score for the free skating with 150.79 points and set a new record total score with 229.71 points.

Pogorilaya had drawn to skate last and put out a solid and intense performance to “The Modigliani Suite” and “Memorial,” but not everything went according to plan. When the first triple Lutz was a bit shaky, she decided to switch the combination to the second Lutz and also changed her other triple-triple combination. The only glitch was an underrotated triple toe. The World bronze medalist finished third in the free skating, but took silver at 211.39 points.

“At these European championships, I actually showed even more that I had planned,” said the 18-year-old. “I did all my jump combinations in the second half of the program, which made my program even harder, but I am quite happy indeed about this. First, I still had lot of power during my skate. Secondly, I managed to change the combinations in order to make them count and not to lose any points. I never even did that at practice. This was the very first time.”

Kostner had to skate right after Medvedeva and showed strong nerves. Her program to “Nisi Dominus” is a masterpiece and she landed all six triples; only one loop was underrotated. It was a wonderful comeback for the Italian star who stopped competing in 2014 following the Olympic season and was banned from competing due to allegedly helping her boyfriend at the time, a race walker, to cover up his doping. Kostner was second in the free and accumulated 201.52 points.

“It was a tough fight and I’m glad that the ladies can put on such a good fight,’ said the 29-year-old/ “There was some amazing skating tonight and I feel honored to be part of this. I didn’t make any major mistakes, but there is always something you could do better. I started from scratch, but the journey is not over yet, it is just beginning.”

“Of course, I remember that Junior World Championship (in 2003),” continued the five-time European Champion. “That year I skated in juniors and seniors. It was my first senior year. I remember being in a group of skaters together with Miki Ando and Yukina (Ota). At practice, we would challenge ourselves to do triple-triple-triple combinations. It was a start that showed me where I wanted to go and where I wished to be one day. It was my first ISU bronze medal, and now again it’s a bronze medal. I don’t think it is a coincidence. I think it’s more hard work behind it and not a coincidence, but it makes me very happy and it shows me that decisions I am taking bring me to the right direction.”

Not only the top three, but also several other skaters turned in strong programs, proving how the level of Ladies’ skating has risen in the past few years. Russia’s 16-year-old Maria Sotskova finished fourth in her debut at Europeans. Her short was clean, but she fell on her triple Lutz-triple toe combination and another triple Lutz in the free (210.52 points).

“It was bad skating today,” said the 2017 Russian national bronze medalist. “I cannot say what went wrong and why I made so many mistakes. I was not nervous, at least I did not feel that while skating. Maybe I was not just prepared well enough. I forgot the first fall immediately, so I would not blame that for such a bad overall performance today. Bad experience is very valuable. I have to watch the video replay, discuss with the coach, and keep working.”

Laurine Lecavelier of France was much more consistent than in the past. Some of her seven triples in her “Grease” program were a bit wobbly, but she pushed through and the crowd enjoyed her performance. She finished fifth (188.10).

“I didn’t feel too well on the ice in the warm up, but then I understood that the ice is different from how it was this morning with so many people in the rink,” said the 20-year-old French champion. “Also, I tried to control it too much, but I was very open to the reaction of the public tonight. They were really enthusiastic and that was amazing.”

Teammate Mae Berenice Meite dropped from 12th to 16th after an error-ridden routine and was in tears.

A year ago in Bratislava, Slovakia’s Nicole Rajicova was the local start and hopes were high that she might come very close to the podium. Instead, she came 12th. However, this time the 21-year-old, who was born in New York, skated almost clean and came in sixth (179.70).

“Finally, in the top ten at a major event. I am very glad that both programs worked out very well for me. Last year in Bratislava, I was the face of the championships and when I went out of the hotel, I saw my face everywhere. I was not ready for that, my trainings were not going well, I got nervous and it was very difficult for me. This year, I was ready for anything, mentally prepared, and I told to myself that I will show the best of me in any case. I worked and trained harder and it was visible in the end. This was my best free skate ever. Now, I want to try harder jumps, more difficult components, I want to improve myself,” the 21-year-old told the press.

Loena Hendrickx, the younger sister of men’s competitor Jorik Hendrickx, was seventh (172.71) in her first Europeans. Despite battling pain in her foot, the 17-year-old was able to show a solid program, but she missed a triple flip in the long.

“I have even worse pain in my heel than after the short program,” revealed the 2017 Belgian national champion. “It is just amazing that I managed my performance so well despite this complication. I am so happy for that, even if there were some small mistakes in the first and second part. I was very motivated.”

“I was watching his performance and will support him tomorrow again,” she said. “I can say my first European championship was a success. I have never seen so many people on the stands and such amazing atmosphere.”

The skater went on to explain that she does not get much financial support. “The travelling is very complicated for me; my parents could not come here with us as it was too expensive. I had to pay all the expenses by myself and it will be the same at the world championships. For example, I got an invitation for the Grand Prix in Russia, but I could not go. It was just too expensive. I hope this will change.”

Ivett Toth came in eighth and delivered Hungary’s best Ladies result in a while, probably since Julia Sebestyen. There were a few wobbles here and there, however, the Michael Jackson short program was very well done.

“It was a bit too much for me to start in the last group,” said the national champion of Hungary. “It had never happened to me before and it motivated me in the training to see the Russians jumping. But then it affected me a bit and I started to feel a bit nervous. But it was a good experience with all the people cheering for us. After the second spin, I got lost a bit and I did not know on which side of arena I was. That is the reason why I lost the points there.”