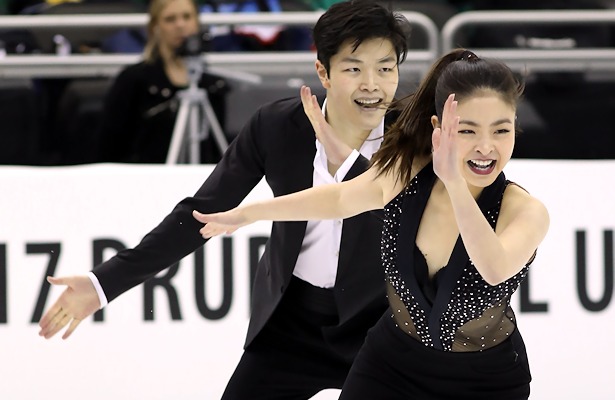 Maia Shibutani and Alex Shibutani are the current leaders in the Ice Dance discipline after the Short Dance at the 2017 U.S. National Figure Skating Championships. Madison Chock/Evan Bates and Madison Hubbell/Zachary Donohue are close behind and are currently neck and neck with a mere 0.24 point difference.

Alex Shibutani doesn’t seem concerned about the the close scores, pointing out that their mindset is based on the confidence they had in their performance.

“We followed our game plan and we’re very happy with how we skated tonight,” he said. “So obviously that’s going to lead to confidence going into tomorrow’s program. It’s another day, so we’re already focused on what we’re supposed to do tomorrow. Points don’t really make too much of a difference to us.”

Earning no less than +2 and +3 for grades of execution (GoE) in each element, Shibutani and Shibutani put out a well-interpreted Blues and Hip Hop routine to “That’s Life” and various music by Jay Z. The defending champions engaged the audience with their level 4 twizzles, midline steps and rotational lift, and upped their personal best by eight points with a new U.S. record score of 82.42 for first place.

When hip hop was introduced as a potential rhythm at the beginning of the season, the team wanted to approach it as authentically as possible, and began working with Hakuto Kaneshi and Ryanna May from Quest Crew.

“We’re just so lucky that, in addition to our great coaches at home, we’ve been lucky to work with great people that we find to be very inspiring,” said Maia Shibutani. “So for our short dance, we’re thrilled with our concept and we know that it still has a long way to go.”

Chock and Bates met all the key points in their level 4 Midnight Blues pattern and showed good energy throughout their Blues and Hip Hop short dance to “Bad to the Bone” and “Uptown Funk.” The three-time and current national silver medalists were strong in their level 4 twizzles, as well as their partial steps and curve lift. Although their midline steps (changed after Trophee de Paris) were only rated a level 3, they were awarded with +3s across the board for the element. They currently sit in second with 79.96 points.

“We skated great tonight,” said Bates. “We also made some changes after the [Grand Prix] Final and really tried to improve the program in certain aspects. I think for the first competition of the second half of the season, it was great.”

“We didn’t have a huge window of time to really master all those new pieces,” he added, regarding to changes made to the twizzles and midline steps, “so I think considering everything, we were really happy with our performance.”

“It was a ton of fun performing today,” said Chock. “We really enjoyed the program. I think we really skated it really well. We had a lot of energy throughout the whole thing and we’re happy we it.”

Hubbell and Donohue also met all key points in their level 4 Midnight Blues pattern and showed wonderfully timed level 4 twizzles to “Feeling Good” and a Hip Hop medley. The crowd enjoyed this energetic routine in which the choreography has changed for the better.

“We spent a lot of time on multiple changes,” Donohue revealed. “First off, most noticeable and actually the smallest, was the music. Throughout the season, people felt we had too many cuts, so we took about eight beats out and it made a really big difference. We spent a lot of attention on detail. Really working with our choreographer and Patch [Patrice Lauzon] a lot on the sharpness, the clarity of the movement.”

“It’s so easy in a hip hop number… you feel the energy and limbs start moving and flying everywhere,” he continued. “In hip hop, what’s beautiful about it is its lines, its fierceness, and the stopping power it has in the movement. So we really try to bring that to our performance, as well as the essentials in movement of what we think blues on the ice should really be.”

The partial steps, straightline lift and diagonal steps also received a level 4, and the three-time and current U.S. national bronze medalists were awarded a new personal best  of 79.72 points for a close third place.

“It’s definitely our highest short program score to date,” noted Donohue. “For us, I think it was just the reality of our hard work paying off. I think for a while, we felt like we deserved bigger scores than we were getting in our performances. It’s nice to finish a program that we feel good about and feel that the crowd and judges felt the same way.”

“Our goal tonight was just to skate confidently and to skate the way we knew we could, which was to get all level fours and we did accomplish that goal, so we’re really proud and looking forward to tomorrow,” said Hubbell.

“We put a lot of work in at home to be able to go out and do what we need to do on the day of competition,” said Hubbell, regarding the close scores. “I think that each of us have the same goal, which is to do our best on that day and the score is a reflection afterwards. I look at my score and I’m proud of the work that we did at home. We made our goal and it’s a reflection to go into the next competition. I’m not going into tomorrow thinking what I have to do to please the people on the panel—I’ve done that work at home. I think that we’re just excited to do what we’ve trained and we’re all strong, so we’ll just see what happens.”

Kaitlin Hawayek and Jean-Luc Baker were strong in their routine to “Feeling Good” and a remix to “How I Feel.” The 2014 U.S.  Junior National champs earned a level 4 on all elements except for level 3 midline steps, and met all key points in the Midnight Blues pattern. They were awarded 72.60 for fourth place.

“Something that we really worked on this year, was not holding back and really performing from the very beginning of the program,” said Hawayek. “There were definitely things that could have been better, but I think in general we’re really pleased with the performance we put out.”

In regards to last season, Baker felt they trained hard, but that he still may have taken it a little bit for granted.

“The injuries didn’t help [either],” he said. “This year, we just really focused on each other and pushing ourselves both mentally and physically and seeing what could happen.”

Hawayek and Baker know that they are often pegged for being safe and similar with a young and youthful style, however, they are proud of that and feel it’s an asset.

“We also recognize that as a senior team, we need to show a sophistication, which is what we really tried to do with the short dance this year while still playing off of our youthfulness,” said Hawayek.