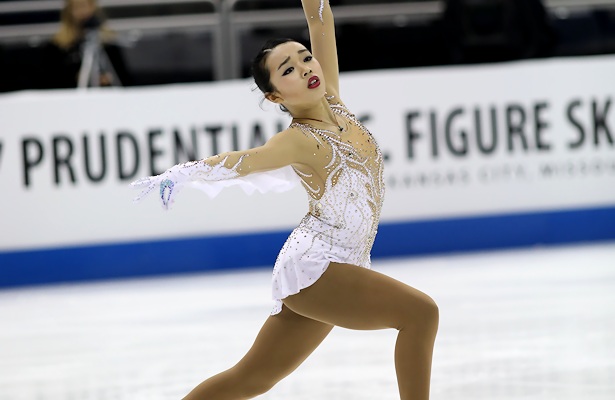 Karen Chen took a surprising lead in the Ladies’ Short Program at the 2017 U.S. National Figure Skating Championships on Thursday night, with Mirai Nagasu and Ashley Wagner close on her heels.

Skating to music from On Golden Pond, which she choreographed herself, Chen gave a poetic and strong performance, nailing a triple Lutz-triple toe, triple loop, and double Axel. The 2016 U.S. Classic bronze medalist earned a level 4 on all elements, racking up high grades of execution along the way for a new U.S. record score of 72.82.

“I was thrilled and excited to be able to go out there and have fun and skate my best,” said the 17-year-old, adding that her body was still trembling. “I’m surprised and shocked! I’m excited to go out for my long and skate my heart out. I’m very happy with how everything came together.”

Nagasu placed a close second with 71.95 points for her seamless routine to music by Frédéric Chopin. The 23-year-old landed a triple flip-triple toe and double Axel, but slightly double-footed the landing on a triple loop. Nevertheless, she earned a level 4 and high grades of execution on all of her spectacular spins, as well as her footwork.

“This is our make it or break it competition and to have delivered a strong competition is what I’ve been praying to the gods for,” she said. “Obviously I made a couple of mistakes… I’m only human. This puts me right where I want to be, right in the game. Going into the long program, I think I’m ready and trained and ready to rock out.”

The five-time U.S. national medalist admits there were mistakes, but overall, felt it was a championship ladies program.

“There’s a surprise winner so far, but the winner comes from the long program, and I put myself in the game,” Nagasu said. “I’m so proud of myself.”

“It’s great at the championships, that in this most stressful situation, we get a day in between to really recover our bodies,” added the student of Tom Zakrajsek. “It’s a lose-lose situation for me, because I want to get it over with but I want to recover, and it’s really not in our hands. So I’m taking to take that day of recovery. I deserve some dessert, and then it’s back on to plan b for me, which is the free program.”

When asked what Chen could learn from her, Nagasu replied: “Well I just want to point out I’m in my early 20s. I’m definitely glad to be out of my teenage years—those were awkward and lot of growing up in the public eye. It was hard at times. I think Karen can understand that as well. It’s hard to always have to watch what you say, to make so many mistakes growing up. I think my best years are yet to come. I think I still have a lot in me. I do get that comment that I’m a veteran a lot, but I feel like I’m a really young skater. I feel like I’m a young butterfly still learning new things. I’m working on new things all the time like my triple Axel and ramping up my program to include that triple-triple and I hit it today. That word ‘veteran’ I’m not sure I really like.”

Nagasu is certainly back in the hunt for a US medal and admits that she’s had to overcome a lot of issues in the last few years.

“I’ve managed to climb up from those problems, I think,” said Nagasu, adding that she hadn’t been to a press conference in a long time. “I’m very proud of how I’ve matured. Taking media training classes and taking a public speaking course in university, I’ve learned to articulate myself a little bit better and so to be here is really exciting for me.”

Wagner delivered a sassy performance to “Sweet Dreams” by the Eurythmics, which featured a triple flip-triple toe and triple loop, but her double Axel had a scratchy landing. While she received a level 4 for two of her spins, her footwork was only graded a level 3. The current World silver medalist earned the highest program component score (34.68) and finished third with 70.94 points.

“It was a really tough program mentally, because I’m coming off some rough skates from my Grand Prix series, admitted the three-time U.S. national champion. “Going out there was a huge hurdle, and skating first [after the warm up group]. Not having that break was tough, but you know what, I am so proud of that program and I think I’m in a great spot going into the long program, just where I’d like to be.”

The program was a relief for the skater who had a rocky performance at the last Grand Prix. Wagner admitted it was a big mental hurdle to overcome.

“It’s been two months since I’ve competed, so that’s the longest I’ve really ever gone in a season,” she said. “Stepping out onto that ice, skating in the warmup, that was very intimidating, and I am so proud that I really went for that flip-toe. That was one of my best that I feel like I’ve done before, and you know, I always like to balance everything out, so I cheated a double Axel, because why not? So I feel like it was honestly a great day for me and I’m looking forward to the long program.”

Wagner chooses to view the word “veteran” as “experienced,” and feels that experience is never a bad thing.

“I’ve gone through the good experiences and the brutally, terribly awful experiences,” she said. “So, I think that the position that Karen is in right now is awesome. Its just a wide open road in front of her, and you know, it’s kind of her choice with what she wants to do with her career.”

Wagner feels that the sport of figure skating focuses too much on age.

“I’m so sick of hearing about my age,” she said. “I’m so sick of it. You guys, if anyone asks me one more question about my age, I’ll just stop talking to them. It’s ridiculous. But at the same time she (Karen) has youth on her side and so much promise, and I think that’s really exciting for US Figure Skating. I think that we definitely need a new crop of young girls to come in, because I will die one day and you guys will need more people. So Karen, keep it up.”

Opening with a combination spin, Tessa Hong delivered a captivating performance to “Ave Maria,” in her senior debut at nationals, showing a great deal of maturity for a 14-year-old. The only flaw was a slightly under-rotated triple toe on the back end of a triple Lutz. The 2014 U.S. intermediate champion also earned a level 4 on two of her spins and footwork, finishing fourth with 65.02 points.

“I thought it was pretty good considering I’ve gone through so many injuries the past two seasons,” said the student who trains in Colorado Springs, Colo. “I’m thankful to be here and I’m so thankful to God because he really helped me to continue and preserve through all my injuries and skate again.”

Gracie Gold found herself in a surprising fifth (64.85) after her program to music from Mr. & Mrs. Smith. The defending champion lost points after doubling a triple flip; however, her tango routine was otherwise well-executed and featured a strong triple Lutz-triple toe, as well as level 4 spins and footwork.

2016 U.S. silver medalist Polina Edmunds had to withdraw as she is still recovering from a right foot bone bruise that also kept her out of the 2016 Grand Prix Series.