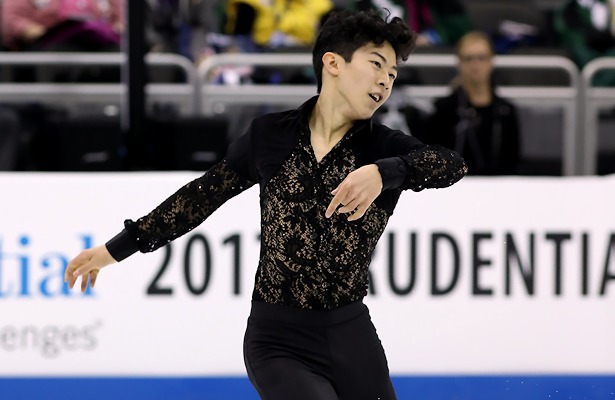 Earlier this month, 2016 U.S. Champion Adam Rippon broke his left foot and sprained the same ankle during an off-ice warm up and had to withdraw from the competition. He is expected to be off the ice for eight to 12 weeks and will resume training with his medical team’s guidance.

“Take offs weren’t exactly ideal, but I guess that’s part of the program and part of the jumps; learning how to fight and how to secure the jumps that aren’t perfect,” he later said.

The 17-year-old also produced a triple Axel, picking up level 4s and positive grades of execution (GoE) for his spins and footwork. He earned 106.39 points for his routine to Le Corsaire, as well as an instant standing ovation.

“Finally! This is the program I’ve been looking for all season,” said the 2016 U.S. national bronze medalist. “I finally put out a good short program. It’s definitely a huge step for me and I’m really happy with the score that I got. That was huge! Looks like I got all my levels, so that’s a huge improvement for me as well. I’m really happy with the way things went tonight.”

It was the first clean short that Chen has put out all season after struggling with the triple Axel.

“That’s a huge step for me,” he said. “I feel like it’s pushing my limits and I’m really happy about that. To be able to do that in the short program was really good for me.”

With an 18-point lead over the rest of the men going into the free skate, it’s not lost on him that he could be getting his first U.S. National title.

“That’s what I’ve strived for my whole life,” said Chen. “I don’t think it’s necessarily something I should be afraid of. It’s something I’ve wanted my whole life. It’s definitely a good step for me and I’m really happy to be where I am tonight and hopefully to continue with this in the free skate.”

Chen admits that there is pressure and expectations after winning the silver at the 2016-17 Grand Prix Final last month, but admits that it also gives competing more excitement and he thrives off the energy that everyone is giving him.

“I definitely feel the praise and it feels like something I’m expected to do, which I feel like I’m able to deliver and prove that I’m able to do it,” he said.

The student of Marina Zueva, Rafael Arutyunyan and Oleg Epstein also has his eye on Worlds.

“That’s the ultimate goal of my season,” said Chen. “Obviously at the Final I’m able to stack up against these top-level skaters. I feel that the short program helps me push that further. I feel like it’s a possibility.”

While Miner didn’t have a quad, he had heart in his routine to “New York State of Mind” by Billy Joel. The 25-year-old opened with a beautiful triple Axel and triple Lutz-triple toe. He also produced a solid triple flip, and his spins and footwork were all graded a level 4 with positive GoEs. He earned a score of 88.67 for second place.

“I’m really happy with the way I skated,” said Miner. “I’ve worked really hard. We have a board at our rink in which we put down a mark for a clean program and I’ve just been trying to write down as many clean programs as I can and it helped me. I felt a little tight on the warm-up, but then I settled myself down and do what I do every day. I went out there knowing that I’d done the work at home. The crowd really helped and made it even more fun, but I was ready when I started, and kind of just did what I do every day. This short program was a far greater one than earlier in the season.”

Miner had doubts in the beginning of the season, and felt that although he was skating well during practice, he would hold back during the competitions.

“I kind of told myself today I want to have go have fun out there and do what I do every day, and treat it like any other program,” he said. “I’ve been skating for a long time and I’ve hopefully got some experience from it, so I just tried to draw on that and use it to help me skate a better competition. That’s what I’m looking forward to doing on Sunday as well.”

“It’s great to see Nathan and Vincent, this sort of younger generation of guys, pushing the boundaries,” said Miner. “It’s definitely motivating for me and it kind of pushes me every day to be better and keep improving. I’ve been a senior for a while now, so it’s good to have that motivation to keep moving forward.”

Zhou, who has been plagued by a hip injury, landed a quad Salchow, triple Axel, and triple Lutz-triple toe in his routine to “Writing’s on the Wall” and “Spectre.” The 16-year-old also impressed with level 4 footwork and spins, earning 87.85 points for a close third place.

“Tonight I really tried my best to show that I’m able to recover,” said Zhou. “I’m really glad to have the resources at the Olympic Training Center, with trainer Brandon, Drew Meekins, Tom Zakrajsek, and my main coach Tammy Gambill. We all have an amazing team and we worked really really hard to get to where we are now. I’m proud of how I skated. There are things that can be improved, but it’s the first short program I’ve done with a clean quad in it. The crowd helped out a lot. I’m glad to show off the training that I do at home. I can only hope to repeat a strong performance in the free skate.”

Zhou, who hopes to be named to the Junior World team, acknowledges that Chen has always been a few steps ahead of him.

“Now it feels really amazing to start closing the gap,” he said. “Something that I really like to emphasize is that I focus on myself and not on my competitors. Nathan Chen is amazing and has the potential to score really high, but I don’t let that affect me. I just focus on my muscle memory and I know I am able to do. I’m  very intrinsically motivated.”

Jason Brown, who was off the ice for two weeks in December due a stress fracture in his right fibula, just started jumping last week. He finished fourth with 79.23 points.

The 2015 U.S. national champion underrotated and fell on his triple Axel, as well as underrotating a triple Lutz, in his routine to “Writing’s on the Wall.” Nevertheless, he didn’t disappoint with his level 4 footwork and spins, and the ice was littered with toys and flowers after he finished.

“We took ‘recovering it’ over ‘training it’ leading up to this event,” he explained, regarding his injury. “My biggest hope is that if I can buy myself more time for Four Continents, for the World Championships, then I’m 100 percent. The last thing that I want to do is go to Four Continents, go to Worlds at 70 percent, at 80 percent. You know the whole point is I can leave this event knowing I am 100 percent, that the leg is going to be 100 percent after this week and we can just continue getting stronger.”