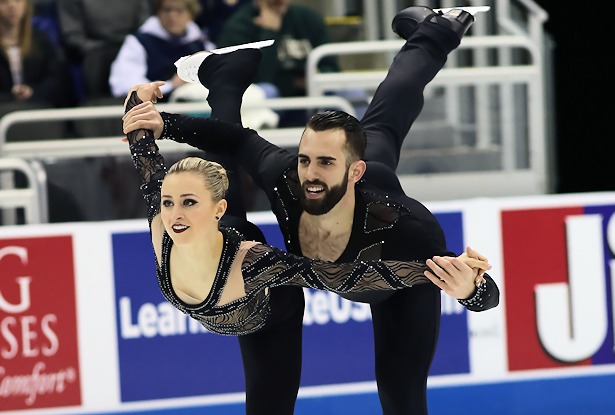 There were some surprises during the Pairs Short Program at the 2017 U.S. Figure Skating Championships on Thursday night. The newly-formed teams of Ashley Cain/Timothy LeDuc and Deanna Stellato-Dudek/Nathan Bartholomay took first and third place, while Haven Denney/Brandon Frazier finished second.

In their debut together as a team at nationals, Cain and LeDuc racked up 69.33 points in their inviting and ambitious short program to “I Put a Spell on You.” The 2017 Golden Spin bronze medalists landed solid side-by-side triple loops, a throw triple Lutz, and showed good footwork in their level 4 steps. Their triple twist, the last element they added to their repertoire, was graded a level one with negative grades of execution (GoE).

The team has only been together for seven months and kept that in mind going into the competition. They relied on their training while remaining calm and focused, and it paid off .

“Our goal going into this was to take a step forward from what we did in Croatia,” said 26-year-old LeDuc. “So every time we’ve gone out and competed, we’ve added a new element and improved on what we’ve done in prior competitions. So, this was right in line with our goals and we look to do the same in the free skate.”

Cain congratulated all the other pair teams, adding that it was a “pretty amazing” event and that it was “cool to be part of it.”

“We knew going into this program that we needed to stay connected to each other,” said Cain, 21. “We knew we were trained and that we were ready. We didn’t go out there knowing what kind of score we would get or placement. We just knew that if we stayed together and connected, we could do what we came here to do. With that being said, we’re only halfway through the competition. We still have a long program to go, but we’re just going to pace ourselves from here.”

LeDuc concurred, adding that he had a lot or respect for the other top teams. “We all sort of come back from different struggles, and it’s the love of skating, I think, that brings everybody back. So we all can share that passion. We’re very happy to be back.”

“As I went out there today, I just said to myself, ‘just do what you love to do,'” said Cain. “I know that’s kind of cliché, but I love to skate and I love skating with Timothy. That’s all I wanted to do was skate because I loved it.”

“I definitely think on Saturday night there’s going to be a lot of redemption skates because all of these paired teams are fired up and they’re ready to go and they’re going to give 100 percent,” she summed up.

Coming off injury, Denney and Frazier showed a big triple twist, along with solid spins and a level 4 lift. However, Haven touched down on the throw triple loop with her hand and underrotated and stepped out of a triple Salchow. The 2015 U.S. National silver medalists finished second in the short with 65.39 points for their well-choreographed “Don Juan” routine.

Frazier, 24, acknowledged they had a few technical mistakes and that they had performed this program better in the past, but felt they did an incredible job of fighting.

“We’re proud for just showing up here after a year off and still being able to put out a respectable performance,” he said. “I’m very proud of my partner for how hard she’s worked.”

“To put things in perspective, I think a year ago, Brandon and I were at the OTC [Olympic Training Center] in Colorado rehabbing and I was skating, relearning how to do throw doubles and single waltz jumps,” offered 21-year-old Denney. “It’s been a long, hard working process to get to the point where we are today. We still have a lot of work ahead of us, but from where to where we are now, I think we’re really proud.”

“I remember one year ago today, Haven and I watched the free skate in my dorm room,” added Frazier. “It was super inspiring to watch, but it was also such a tough thing to swallow as well, because we really wanted to be there. But we had to step back, because we were down, and there was so much work we had to do just to get back here. I think it’s safe to say, Haven and I have the utmost respect for everyone in this competition and it’s such a privilege to be here.”

Stellato-Dudek and Bartholomay, who are also debuting this season as a team, skated a clean and inspiring program to “Hallelujah” by the Canadian Tenors which featured a triple twist, side-by-side triple toes, and throw triple loop. Their level 4 rotational lift earned high GoEs and they were rewarded with a score of 65.04 for a close third after the short.

The team was thrilled to be in third place, especially given that Stellato-Dudek, 33, has been off ice for about 17 years. Meanwhile, Bartholomay had been coaching while looking for a partner.

“I think we put down a really nice program just like we’ve been training every day,” said Bartholomay, 27. “Much like Ashely and Tim, we’re a very new team with not a whole lot of expectations, but we’ve really kind of kept it together for competition just like we have in practice every day. We’re just going to keep our heads down and carry forward with that.”

Marissa Castelli and Mervin Tran earned a level 4 on their lift, spins, and footwork, but struggled on their side-by-side triple Salchows (she fell) and the throw triple Salchow (she two-footed) to finish in fourth with 64.29 points. Nevertheless, the 2016 U.S. National bronze medalists earned the highest total program component score (30.79) in their routine to “Fallin'” by Alicia Keys.

“We’ve been working really hard, and obviously we’re really disappointed in how we skated,” said Castelli. “It was honestly just nerves. We can do everything in the program. We’re just disappointed with it.”

Tran still felt they were within “striking distance.”

Defending champions Tarah Kayne and Danny O’Shea landed solid triple Salchows and showed good levels and high GoEs in most of their elements in their short to music by Amy Winehouse. However, Kayne fell on an under-rotated throw triple flip and they only received a level one on their triple twist. The team was also out of sync on their final element – the flying camel combination spin. They were fifth with 61.80.