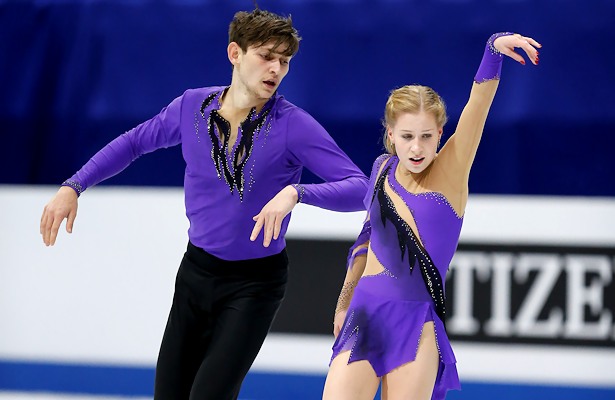 Australia’s Ekaterina Alexandrovskaya and Harley Windsor made history when they skated to the Pairs gold medal at the 2017 ISU World Junior Figure Skating Championships in Taipei City, Chinese Taipei, on Friday. The Russian-Australian duo became the first skaters to claim gold at an ISU figure skating championship and the first ones to win a medal for Australia in 41 years. In 1976, Elizabeth and Peter Cain had taken a bronze medal in Pairs at Junior Worlds, which was until now, the only figure skating championship medal for the country. Peter Cain, who is coaching singles and pairs in the USA now, witnessed the historic moment in Taipei.

No doubt, Alexandrovskaya and Windsor’s triumph was the biggest story of the day. Short program leaders Alexandra Boikova and Dmitrii Kozlovskii of Russia earned the silver medal and China’s Yumeng Gao and Zhong Xie took the bronze. Interestingly, all three teams competed in their first season together and debuted at Junior Worlds except for Xie, who competed in 2016 with his previous partner, Ying Zhao.

Alexandrovskaya and Windsor were third in the short to “Skyfall” with a solid performance. In the lyrical free to the W.E. soundtrack by Abel Korzeniowski, the Tallinn Cup Champions nailed their solo jumps, lifts and a throw triple flip, but Alexandrovskaya fell on the throw triple Salchow. Nevertheless, the quality of their elements and their speed were good so that they earned mostly positive Grades of Execution (GOE). The ISU Junior Grand Prix finalists were ranked second in the free, but moved up to first at 163.98 points.

“It’s still slowly sinking in. It’s overwhelming for both of us,” said Windsor. “We came in this competition very confident, in our training and coaches. In the performance, we just took one element at a time and just tried to focus. We made a little mistake, but in the end, it sort of worked out for us.”

Windsor said that lots of hard work was the secret their success: “Lots of hours on the ice, lots of hours off the ice, lots of tears, lots of fights and lots of smiles, as well and endless lifts. I’d like to thank both my coaches (Andrei Pachin and Andrei Hekalo) for bringing us here and making me strong and pushing us towards being the best we can.”

The team now is headed to the 2017 ISU World Figure Skating Championships in Helsinki, Finland, later this month and hopes to qualify for the Olympic Winter Games next year.

Boikova and Kozlovskii had earned a slim lead in the short program. The 2016-17 ISU Junior Grand Prix Final bronze medalists did not make any major mistakes in their free to “Tristan and Isolde” by Maxime Rodriguez, but a wobble here (his shaky triple Salchow) and some bobbles there (both throws were not clean) and a lack of flow cost them the title. The Russians lost points in the GOE and in the components. They ranked only fourth in the free, but held on to second at 161.93 points.

“We wanted to skate better than that obviously and we made some errors,” said Kozlovskii, “but what happened, happened. We know that we have a lot of work ahead of us and we are confident that we can be more successful next time.”

The season is not over for the Russian Junior Champions yet. They have another competition next week, the Spartakiade (national competition), in Saransk, Russia.

Boikova added that they will remain at the junior level next season.

Gao and Xie did not have the highest degree of difficulty in their solo jumps, but the throws were of typical Chinese quality and they looked smooth and fast. The national bronze medalists totaled 161.09 points.

“When coming to Taipei, we never thought we could win this medal,” said Xie. “We are happy with what we have achieved in this (short) time (skating together), but we still have to improve a lot. We want to focus on our training this summer and we want to take it step by step. We hope to improve our technique and the increase the difficulty for next season, and we would like to compete again at Junior Worlds.”

For Amina Atakhanova and Ilia Spiridonov of Russia, the competition really had its ups and downs. The Muscovites struggled in the short program. First she fell on the throw triple flip, then he aborted the Lasso lift and they stood in eighth place. The free skating went much better. The only error came in the combo when she did a double Axel-single toe-double loop, while he did a double Axel-double toe. The 2016-17 ISU Junior Grand Prix finalists won the free skating, but they missed the podium by 3.33 points to finish fourth.

Canadians Evelyn Walsh and Trennt Michaud, another new team, turned in a solid performance (only the triple twist was messy), to come fifth. Alina Ustimkina and Nikita Volodin of Russia made errors on the side by side jumps and throws and dropped from fourth to sixth.

USA’s Chelsea Liu and Brian Johnson had a rough skate. She fell hard on the double Axel and hit her head on the ice, but continued and he fell on the entry into the solo spin (seventh). South Korea’s Su Yeon Kim and Hyungtae Kim skated well (eighth) and showed competitive technical content with a triple Salchow, double Axel and two triple throws. They are only missing a triple twist in their arsenal.