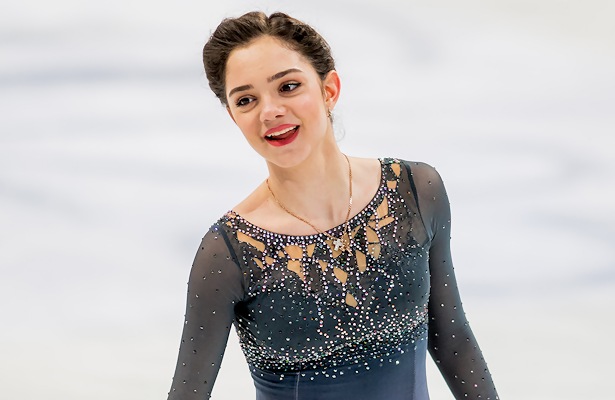 Perhaps with the pressure of Peyongchang looming, many of the Ladies medal favorites succumbed when they took the ice at the 2017 World Figure Skating Championships on Friday. Tumbles and two-footed landings were the theme of the night. Despite the pattern of disastrous skates – first Ashley Wagner, then Carolina Kostner, then Anna Pogorilaya – mighty Russian Evgenia Medvedeva skated her very best and set a new record along the way.

Medvedeva continued her reign as the sport’s queen, winning her second World championship in Helsinki with a score of 154.40 for a total combined score of 233.41. Skating expressively to Extremely Loud and Incredibly Close, the delicate skater’s jumping elements were highlighted by a triple flip-triple toe loop and triple Salchow-triple toe loop past the half-way point.

“Today I really enjoyed skating,” the record-holder said. “I was a little bit nervous in the six-minute warm up, but before my skate, I told myself, ‘Evgenia, you need to keep calm.’ I skated really softly and I am satisfied with my performance. Like last year, I felt absolutely calm, not euphoric. I am absolutely thrilled! I did everything I can do and I felt relief.”

Canadian Kaetlyn Osmond sensitively portrayed Mimi from La Boheme in her free skate, reeling off six triple jumps in the process, including a soaring triple flip-triple toe loop to win the silver medal. The three-time Canadian champion received a score of 142.15 for the effort resulting in a total competition score of 218.13. Her only error came in the doubling of her planned triple loop, though she had all level four grades of execution (GOE) in her spins.

“That is the way I have been training all season at home,” said the 21-year-old. “That’s the way I have wanted to compete all season. Obviously, it still wasn’t perfect, but I did everything that I possibly could and to the best of my ability. My loop is a loop, I’ll figure it out eventually. But overall, I was just super excited with how I could remain focused and that is what I have been working on the most this year: remaining in myself and in the moment, trusting myself and trusting my training, and finally it paid off.”

“I have been trying to shrink it a little, but the more I gain on Evgenia the more she gains also,” Osmond said about closing the point-gap between Medvedeva and her. “It would be incredible to really push to get that gold medal, but I finally learned how to skate for myself this year and finally learned to enjoy every moment and not worry about placements and not worry about results. I just want to keep going with that.”

Gabrielle Daleman of Canada performed her provocative free skate choreographed to “Rhapsody in Blue” by George Gershwin by opening with a gargantuan triple toe loop-triple toe loop followed by five other triple jumps. The Four Continents silver medalist’s only mistake came on a step out of a double Axel. The performance earned her a bronze medal with a free skate score of 141.33 and a total combined score of 213.52.

“I just did what I do every day, taking one element at a time and I absolutely said to myself, ‘You can do this,'” said the 19-year-old. “I skated with so much love and heart and just pulled it off. I have worked so hard for this. I’ve dreamed of being a World medalist for so many years and this year I finally believed in myself. I told myself that I could do it, I trusted myself.”

US champion Karen Chen skated a sophisticated free skate to “Tango Jalousie” by Jacob Gade. Landing six triple jumps before falling on a triple Lutz and stepping out of a double Axel. The American placed fourth with a free skate score of 129.31 for a total combined score of 199.29.

“I did feel pressure definitely, but I just tried to block it out and just do my job,” said Chen of skating amongst the world’s best skaters. “And I kind of gave myself this feeling that I am very thankful to be here. I am very thankful to be in the final warm up group and I should be proud of that accomplishment and I should take the opportunity and just use it and should just focus on myself and skate my best.”

Japan’s Mai Mihara placed fifth with a joyful program set to Cinderella by Patrick Doyle that featured seven triple jumps. The 2017 Four Continents champion earned a score of 138.29 in the free skate for a total combined score of 197.88.

“It was amazing,” said Mihara of the showing at her first World championships. “I was so happy to be able to perform the best ‘Cinderella’ program of the season. I was almost crying after the spiral sequence. I was so happy to compete in such a big competition in front of such a huge audience. I was happy to see an even higher score than at Four Continents and this will motivate me in my future skating life.”

“There’s so many different kind of feelings. It was like an explosion. Lots of excitement and joy, but also a bit of tension when you think, ‘Okay, everybody is watching me,'” said the Italian skater, reflecting on her performance. “But it’s a great feeling that confirms my decision to come back and what I am doing and gives me a lot of power. I started a new journey only six months ago, from zero. But it’s going forward step by step and I feel it’s only the beginning.

Uncharacteristically, USA’s Wagner remained in seventh position after her mediocre free skate set to “Exogenesis Symphony Part III” by Muse which earned a score of 124.50 for a total score of 193.54. Though known for roaring in free skates, the 2016 World silver medalist singled the back half of her planned triple flip-triple toe loop combination and later underrotated her triple Salchow and triple flip.

“It was not my day,” Wagner reflected. “I came here very prepared, skating the best I’ve ever skated, which is frustrating, because I am in the best shape of my life. To put out that performance is disappointing. As the week went on by, I definitely got in my own head a little bit. I was just not feeling in my body — it was an out of body experience and I was so nervous going out there, so the fact that I even did that much I’m happy with.”