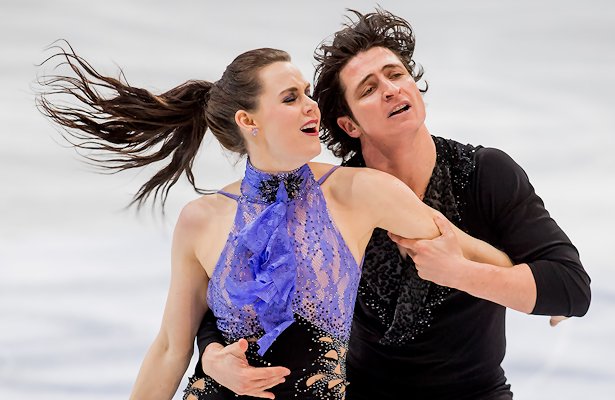 The ice dancers were the last discipline to begin competing at the 2017 World Figure Skating Championships in Helsinki, and quite possibly, saved the best for last with a short dance that was replete with crowd-rousing performances and a new record score.

With panache, flair, and sass, 2010 Olympic champions Tess Virtue and Scott Moir continued their dominance since returning to the sport, winning the short dance with their sizzling “Prince” routine en route to a record score of 82.43. The seven-time Canadian champions opened the routine with crisp sharp movements and continued them throughout, reeling off level four elements including the twizzles and a sensational curve lift.

“We are very fortunate,” said Moir. “That was a great skate. We worked hard, we prepared, but we felt the pressure today being back at worlds after so much time knowing that the field is very strong. Seeing Gaby and Guillame in practice every day, knowing what they are going to bring. We knew we had to bring our best.”

Gabrielle Papadakis and Guillame Cizeron of France performed their sultry blues and swing to “Diga Diga Doo” with their signature smoothness highlighting Cizeron’s flexibility to claim 76.89 points and a finish in second place. The two-time and defending world champions opened with a fluid level three twizzle sequence that was both sharp and fast in its movement. The only level four element of the program, however, was the stationary lift.

“I am satisfied overall,” commented coach Romain Haguenauer. “I think they had a really good performance and skated very clean. It was their best short dance of the season, I would say. They looked solid and the skating was fluid. The GOE’s (Grades of Execution) are excellent indeed, and also the components are very high.”

Madison Hubbell and Zachary Donohue skated a high-energy short dance to place third with a new personal best of 76.53 points. While keeping up with their mash up of hip hop beats, the US bronze medalists reeled off three level four elements, including their galloping twizzles and straight line lift.

“We are just ecstatic,” said Hubbell. “We changed our mindset and changed not letting ourselves limit what we’re capable of and wrapping out minds around being the very best in the world. We are seeing the fruit of that work.”

“We focused on the precision and owning this performance,” added Donohue. “That’s what was previously missing for us.”

Skating to “Bad to the Bone” and “Uptown Funk,” teammates Madison Chock and Evan Bates performed their short dance with spunk to finish fourth with a personal best score of 76.25. Highlights to the Americans’ routine included their level-four curve lift and Chock’s tiger-like presentation.

“Everything can always be better, but it felt amazing out there today,” said Chock. “This definitely felt like our best performance of the season and we’re very excited. The crowd was fantastic and we skated with a lot of energy.”

Maia Shibutani and Alex Shibutani skated a crisp and dashing short dance set to “That’s Life” by Frank Sinatra. The 2016 World silver medalists executed only two level four elements and received a level two on their partial step sequence. The US champions scored 74.88 for the effort and currently sit in fifth place.

“I think the performance was great, our strongest performance of the year,” said Alex Shibutani. “We were a little disappointed in our score. We saw that we missed some levels. Sometimes you get marks that you don’t quite understand.”

2015 Four Continents champions Kaitlyn Weaver and Andrew Poje cranked out a stylish short dance set to Michael Jackson that energized the audience. With two level four elements, the Canadians scored a new personal best of 74.84 to finish in sixth place.

“We felt really good out there,” said Weaver. “We just wanted to go out there and just let it happen and we really feel like we’re in that groove today. We felt each other and we felt that warm audience out there. We just really wanted to take this whole season to build on our weaknesses and on our strengths—to build each other in our skills. [We also want to build] on our connection and everything so that we feel strong going into next season. So this was a stepping stone towards our ultimate goal.”

Italians Anna Cappellini and Luca Lanotte finished seventh with a score of 73.70 for their animated Jersey Boys-themed short dance. The 2014 World champions managed two level four elements including the twizzles.

“In the grand prix, it didn’t come out the way we expected,” Cappellini said about the traction of this short dance over the season. “Finally, at Europeans, the score was good and reflected what we felt this dance could do. So, we were confident that we could do a good one and just put a good score out there for everyone else that had to skate after us. We have a good feeling about what we did, we’re just a little sorry it wasn’t a little higher.”

On a resurge, Russians Ekaterina Bobrova and Dmitri Soloviev performed their short dance to “Sing,” opening with smooth level four twizzles. The 2013 World bronze medalists, however, only received levels two and three in their step sequences to score 73.54 for eighth place.

“We are really happy,” said Soloviev. “Our performance was our best except the scores. We don’t know why so low scores, but we will think about it after the free program.”