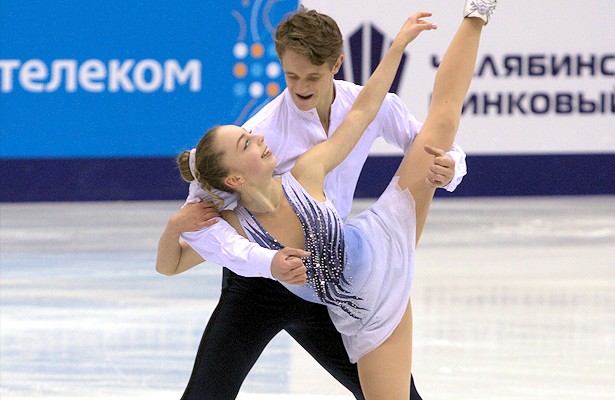 When Russia’s Aleksandra Boikova and Dmitrii Kozlovskii decided to team up in November 2015, they didn’t expect to rise to the top of the junior pairs division so quickly. However, Boikova, who just turned 15 in January, and Kozlovskii, 17, not only qualified for the ISU Junior Grand Prix (JGP) of Figure Skating Final in December and claimed the bronze medal there, they also took the national Junior Pairs title in February.

The rise of this young team is even more surprising as they both have had little to none experience in pair skating when they joined forces. They were single skaters in Alexei Mishin’s group in St. Petersburg. First, Kozlovskii decided to switch to pairs following the 2014 and 15 season and started to train in Tamara Moskvina’s group. Boikova followed him in November 2015.

“I decided to switch to pair skating in the middle of the season,” she said, laughing. “I had problems in singles. I was always kind of in the middle, like sixth or seventh, and it didn’t make sense to continue. I decided to try pairs to see if it works out or not, and so far it is working out well.”

Kozlovskii, who started pairs four months earlier, already had a partner, but when Boikova arrived, the skaters and the coaches all agreed that they should skate together.

“It was our wish to skate together since we knew each other and we skated in the same group under the same coach,” Kozlovskii explained. “Having teamed up, we quickly got results, and now you see after one and a half years we are Russian (Junior) Champions.”

The skaters credit their coaching team for their fast progress. Their coach is Artur Minchuk, who competed at the international junior level in pair skating for Russia and even skated with Ksenia Stolbova from 2006 to 2008, but ended his competitive career in 2011. However, the legendary Tamara Moskvina is the head coach of the pair skating training group in St. Petersburg.

“Thanks to the basics, we already got in singles and to the advice and the set up of our pair skating specialists, we were able to put it all together and achieved the result that we got now,” the well-spoken Kozlovskii said.

Working with Moskvina means a lot to the young pair skaters, who consider her to be a “figure skating guru.”

“What can you say about a person who has educated such a number of Olympic Champions?” Kozlovskii asked rhetorically. “That shows that this is not a coincidence or that she was lucky, but it tells about the professionalism of this expert. When you realize that you are working with such a great person whose name is written in the history of figure skating with golden letters, it is a huge experience that we try to use on the ice and maybe even in future life.”

Boikova, especially, is still a bit surprised by their success in their first full season. “We didn’t expect that, and we were just told, ‘if you skate clean, everything will be fine.'”

“In our sport, you only have to work hard and try to show your best in competition,” the confident Kozlovskii added. “We are trying hard, we are working, we are training and that leads to a result.”

Competing in their first season at this high level, the skaters feel that they are getting a lot of experience. The JGP events, the JGP Final, Russian (senior) nationals and Junior nationals were big and new events for them.

“These are the emotionally most draining competitions, because you go out and the whole arena is watching you,” Kozlovskii shared. “You realize that a lot is at stake and you are trying to skate physically at the highest level, but also emotionally and this is tiring. Therefore we did some psychological rehab work after each competition. You have to be emotionally ready for each competition. If you are not ready emotionally, then in the most decisive moment you’ll make a mistake that most likely might decide about a medal. Therefore, we are working a lot on our emotional preparation.”

“My partner is helping me a lot and Tamara Nikolaevna (Moskvina), as well as Artur Leonidovitch (Minchuk), are prepping me,” Boikova added. “When something doesn’t work, they calm me down and help me to focus on my work.”

Boikova and Kozlovskii, who are both rather tall and long-legged, look a little like ice dancers and try to capitalize on that. They have worked hard with their choreographer Tatiana Druchinina, other choreographers and ballroom dance teachers in order to polish their moves and their style.

“Maybe this qualified us for looking like that (ice dancers) on the ice,” Kozlovskii noted. “Nevertheless, it is  huge work, not just ours, but of all the experts that teach us.”

While the Russian skaters were not too interested in ice dance when they were single skaters, now they are in love with the discipline.

“When I started to travel to competitions as a pair skater to the Junior Grand Prix, I started watching dance and I was just thrilled by it,” recalled Kozlovskii. “I was thrilled, because their programs are like one big element. Everything is so close together, the speed (they have) and (it looks) spectacular. I really enjoyed it. Now I am always watching ice dance.”

Boikova agreed: “Like Dima, I wasn’t watching dance too much before, but now I like it, especially the teams at the world level such as Tessa (Virtue) and Scott (Moir), (Gabriella) Papadakis and (Guillaume) Cizeron. They really impressed me in the Final. We watched them live.”

The Russian Junior Champions feel that they are a versatile team.

“We can skate something emotional and lively like our Spanish short program (“Flamenco” by Didulia), and we can skate something lyrical like in our free program (“Tristan and Isolde” by Maxime Rodriguez),” Kozlovskii noted. “The character of our pair depends on the type of program we skate. We can skate to everything and we try to skate everything, to please, to be different and not to repeat ourselves.”

Off the ice, the skaters are in high school – Kozlovskii in his final year – and both enjoy studying foreign languages.

“I know English quite well and can speak it fluently as I was studying for four years with a native speaker from Canada,” Boikova said. “I also study German, but it is lagging behind a little. I also would like to learn French.”

“In the future, I would like to study also other languages,” the 17-year-old offered. “French and I really like Italian. I take my education seriously. Sport is sport, but education is an important part of life.”

They are both think about taking up Chinese and maybe Japanese.

Asked to describe the partner in three words, they don’t have to think long. “Smart, calm and confident,” said Boikova. “Very nice girl,” Kozlovskii responded with a smile.