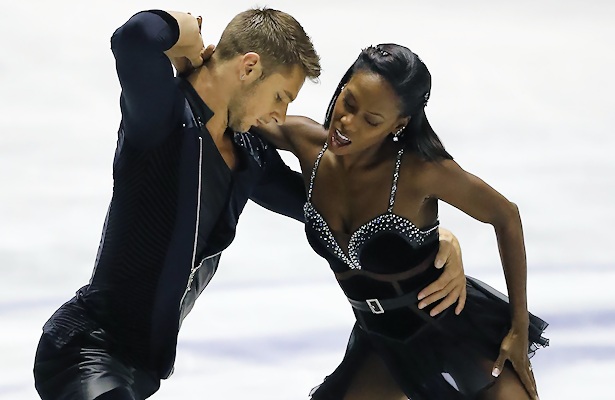 Vanessa James and Morgan Cipres of France perform their Short Program at the 2017 World Team Trophy.

The Pairs event opened today’s competition with their Short Program and there was a big surprise when top favorites Evgenia Tarasova and Vladimir Morozov of Russia failed to deliver. Her falls on the side by side triple toe and the throw triple loop left the World bronze medalists in fourth place at 66.37 points. They added only nine points to the team score.

“These were technical errors on my side more than a result of being tired at the end of the season,” Tarasova admitted. She added that she does not feel affected anymore by her injury sustained at Worlds when she cut her leg in a practice accident and received ten stitches.

France’s Vanessa James and Morgan Cipres came out to take the Pairs Short with a strong performance to “Earned it” by The Weeknd that included a solid side by side triple Salchow and throw triple flip. The European bronze medalists set a new personal best with 75.72 points for themselves.

“We are very happy to have skated as well as we did, although it was not easy,” Cipres, who is also the captain of Team France, commented. “It is at the end of a long season, but the atmosphere is always great, the Japanese are super nice, and our team was top. Our motivation is as always to skate our best, to skate clean. We’ll go for the quad again; we’re not doing less or more (than in other event(s).”

Cheng Peng and Yang Jin of China secured 11 points for their team by coming in second. The ISU Grand Prix Finalists turned in a clean program with a triple toe and throw triple loop as well and entertained the crowd with their fun interpretation of “My Drag” (71.36 points).

Kirsten Moore-Towers and Michael Marinaro of Canada placed third with another clean performance (69.56 points). Ashley Cain and Timothy LeDuc (USA) were fifth after a messy triple twist and an underrotated side by side triple loop (59.57 points). Sumire Suto and Francis Boudreau-Audet came sixth. She fell on a downgraded triple Salchow and also stepped out of the landing of the throw triple Salchow (54.84 points). 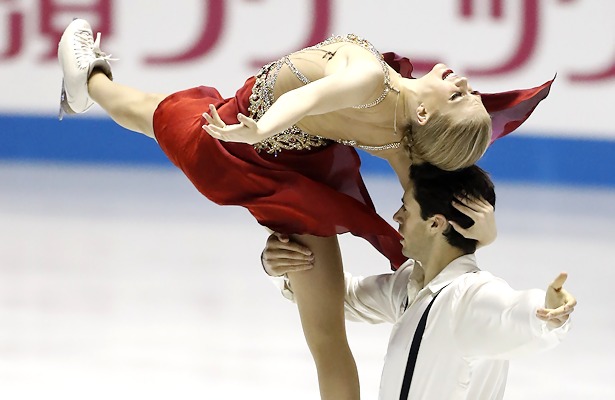 Kaitlyn Weaver and Andrew Poje of Canada perform their Free Dance at the 2017 World Team Trophy.

In Ice Dance, Canadians Kaitlyn Weaver and Andrew Poje put out a passionate and flawless performance to “En Aranjuez, con tu amor” and collected a level four for their spectacular lifts, the combination spin, twizzles and diagonal step sequence while the circular footwork was rated a level three. The Canadians posted a new personal best with 113.83 points and won the Free Dance.

“It feels good,” Poje shared. “It’s been an up and down season. I think these two performances will be very memorable, because they are performances we are very happy with and it was the last time out there. I don’t know if they were the best ones (this season), but they’re definitely happy ones.”

USA’s Madison Chock and Evan Bates had to overcome a stumble in the serpentine footwork early into their program to “Under Pressure” by David Bowie and Freddie Mercury, but went on as if nothing had happened and produced six level-four elements. The two-time World medalists placed second at 109.96 points.

“It was nice to skate in front of the crowd here,” said Chock. “They were absolutely phenomenal. They bring such a nice energy to our skating and to have that be our final skate was special.”

“This has been a very long and challenging year for us,” added Bates. “There have been a lot of highs and some lows as well. It has been up and down and it makes you tired by the end of the year. We are ready to start our new programs and have a clean slate. We are ready to go through that creative process again which is one of the reasons that we love this sport so much.”

Ekaterina Bobrova and Dmitri Soloviev turned in a solid dance to a Chopin Prelude and a modern version of the Four Seasons, but their step sequences and the combination spin merited a level three and the 2017 European bronze medalists came third just as they did in the Short Dance (104.55 points).

“For me, this is a very good experience,” Soloviev explained. “I never missed the twizzles this season and now I did that mistake (in the short dance), but today I pulled myself together. Overall, (they) weren’t our best performances. The spin (in the Free Dance) was a level three and a lift didn’t go so well. I don’t want to complain about tiredness, but on the other hand, we are humans, not robots. We are all tired and need some rest.” 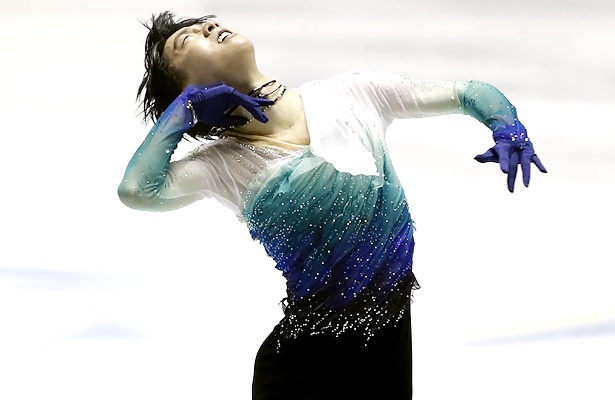 Yuzuru Hanyu of Japan performs his Free Skate at the 2017 World Team Trophy.

Japan’s main force were again the men and Yuzuru Hanyu successfully looked for redemption after a sub-par short program. The Olympic champion went for five quads in his program to “Hope and Legacy” and landed four – the loop, a quad Salchow-triple toe, a quad toe and quad toe-half loop-triple Salchow. However, he popped a Salchow and at the end, also an Axel. However, the other jumps looked effortless and he also impressed with his flow over the ice to score 200.49 points.

“It is the first time I did the combination quad toe-half loop-triple Salchow,” the two-time World champion noted. “It was not perfect, but I am satisfied. It was the first time I did three quads in the second half of the program and I believe I am the first skater to do this. I am glad I had the energy for that, but I still need more strength physically and mentally.”

Uno opened his Tango routine with a solid quad loop, but the quad flip was shaky and the Lutz received an edge call. Other highlights of the program were the triple Axel-triple toe and a quad toe, but he fell on the second quad flip that was downgraded. Again he was over-scored compared to Hanyu, especially in the program components (198.49 points).

“It was just like practice and felt very normal,” Uno offered. “I tried (to give my best), but instead of being very determined, I was almost too relaxed. I felt no tension during the pre-practice, my performance, or after. I was not physically too worked up at all, it was just a strange feeling.”

Patrick Chan came back from an error-ridden short, and for the first time, nailed three quads in the program – two toes and the Salchow. The only major glitch in his beautiful performance to “A Journey” (composed by pair skater Eric Radford) was a single Axel.

“I feel good, because it’s the first time I did all three quads in the long program,” said the three-time World Champion. “Of course there still were some mistakes. Even yesterday’s experience is part of the process, but that’s the plan for next year – to do two quads in the short.”

Nathan Chen’s (USA) program was highlighted by a quad flip-double toe, a nice quad toe-double toe-double loop and a solo quad toe, only the second flip was wobbly. The Four Continents champion earned 185.24 points. The 17-year-old enjoyed his debut at the Team Trophy.

“This is a unique experience,” he said. “It is cool to have all of the teams fighting for their own countries. I have really enjoyed this event. This was the last program of my season, so it’s great to now be able to get some rest. I’m ready for next season. I think today went well. I need to try more to get into the music and connect with the audience. I made some mistakes today, but I will address them all for next season.”

Russian champion Mikhail Kolayda fell on his opening quad Lutz, but nailed everything after that including a quad toe and two triple Axels (184.04 points).

“Almost everything I planned worked out, except for the quad Lutz,” the European bronze medalist noted. “I was lacking just a little bit. Never mind, it will be fine next season. I hope to gain more consistency. Overall at this competition, I ended the season on a positive note.”

USA’s Jason Brown did not try a quad in his exquisite program to The Piano, but went for a clean skate with all triples. He landed everything, but then singled the loop and finished sixth (179.35 points).

“I was super excited with my performance,” said Brown. “I’m bummed about messing up my loop, but other than that, I’m very pleased. I felt like it was clean, polished and it was a nice farewell to the program. To do that here in Japan with this incredible crowd in front of my teammates, is a great feeling. I’m really proud of our team.”

China’s Boyang Jin doubled his Lutz and stumbled on several other jumps to place seventh (174.63 points).