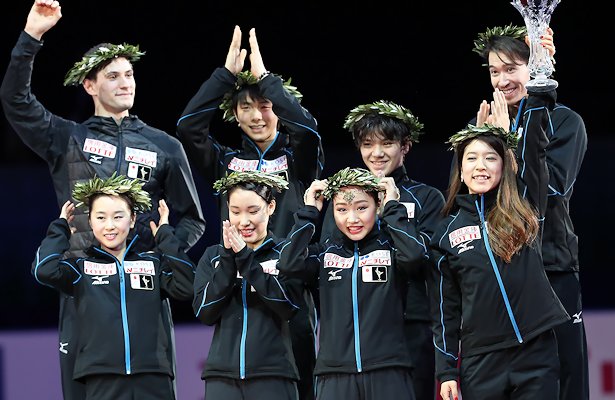 Japan’s up and coming Mai Mihara and Wakaba Higuchi carried their team to the gold medal at the 2017 ISU World Team Trophy on Saturday. Team Russia pulled up again to finish second, while defending champion Team USA settled for the bronze. Japan accumulated 109 points, Russia had 105 points and the USA collected 97 points. The other placements remained unchanged: Canada was fourth, China fifth and France sixth.

The Pairs kicked off the final day of competition with the Free Skating. Vanessa James and Morgan Cipres of France again delivered an excellent program. Skating to “The Sound of Silence,” the European bronze medalists landed a triple twist, triple toe-double toe-double toe combination and throw triple flip. The French were the only pair to go for a quad, a quad throw Salchow, and while fully rotated, James two-footed the landing. The team scored 146.87 points, a new personal best.

“It’s something you dream about doing, but when it actually happens, it still feels like a dream,” said James. “We are very happy and proud, but it was not easy. But it shows the work pays off.”

“It was just amazing today,” added Cipres. “All the teams in the boxes stood up for us, that really touched me.”

Russia’s Evgenia Tarasova and Vladimir Morozov rallied back from their disappointing short program and came in second in the free skate (142.38 points) which gave their team 11 points. Their routine to “Music Was My First Love” was highlighted by a big triple twist, side by side triple toe-double toe, beautiful throws and level-four lifts and spins. The only error came when Tarasova double the Salchow.

“I went out for the free as usual,” said Tarasova. “Before and at practice, Nina Mikhailovna (Mozer, coach) found very exact and right words for me. After the double Salchow I told myself, ‘enough now,’ remembered all my skates in the season, pulled myself together, and did all the other elements well.”

Cheng Peng and Yang Jin of China had to overcome her fall on the double Axel right at the beginning of their program to “The Umbrellas of Cherbourg,” but the rest of the program was clean, including a triple toe-double toe and triple throws. The team scored 133.13 points.

Skating to “Un ange passe,” Kirsten Moore-Towers and Michael Marinaro of Canada pulled off a flawless program to place fourth (130.09 points). USA’s Ashley Cain and Timothy LeDuc landed a side by side triple loop, but collided with each other in a transition move and fell. They ranked fifth (104.23 points).

“We had a little mishap where we tripped and went down, but we got up and kept going and we finished the program strong,” Cain offered. “You get up, you brush it off and you keep going, no matter what.”

The competition concluded with a spectacular Ladies free skate. Once again, Russia’s Evgenia Medvedeva was untouchable. Not only did she easily nail seven triple jumps and showed excellent spins and footwork, but she also performed her program with emotions, bringing across the story of her program. The two-time World champion smashed her own record score (154.40) from Worlds and pushed the record to now 160.46 points –due in part to the +3 Grades of Execution (GOE) on her elements, as well as perfect 10.00s for performance from all nine judges and eight 10.00s for composition and interpretation of the music.

“Honestly, I didn’t expect that,” Medvedeva said about her score. “That is just awesome. I enjoyed this unreal season so much, the work we did, the people I met. I am glad that I was able to compete in the team event and to add something to the team result. I went out on the ice absolutely calm, there was no shadow of a doubt or lack of confidence in me.”

Japan’s Mai Mihara turned in an inspiring performance of her “Cinderella” program, hitting all seven triples as well. In the Kiss & Cry, Yuzuru Hanyu acted as “prince” and presented her with the “glass slipper” (made of paper by team captain Kana Muramoto, the ice dancer). Mihara scored 146.17 points, a new personal best.

Wakaba Higuchi did not let her teammates down either and had a clean skate to “Scheherazade,” posting a personal best of 145.30 points. Together, the Japanese ladies brought home 21 points for their team and secured the victory.

Elena Radionova of Russia achieved a season’s best with 137.08 points. The first half of her “Tosca” program was flawless, but then she made two mistakes – underrotating and stepping out of a double Axel and also underrotating a triple Lutz.

USA’s Ashley Wagner turned in a seson’s best of 133.26 points and skated beautifully to “Exogenesis Symphony Part III Redemption.” However, there was a glitch when she underrotated both triples in her triple loop-single loop-triple Salchow combination.

“This has been a turbulent season for me, so to finish with such a strong performance was really nice,” Wagner offered. “That wasn’t perfect, but I fought for every single thing. I’m very happy. This was a competitive field and I’m proud that the United States is bringing home a medal. This is a great event to end the season with and we are so appreciative of the fans that were here supporting us.”