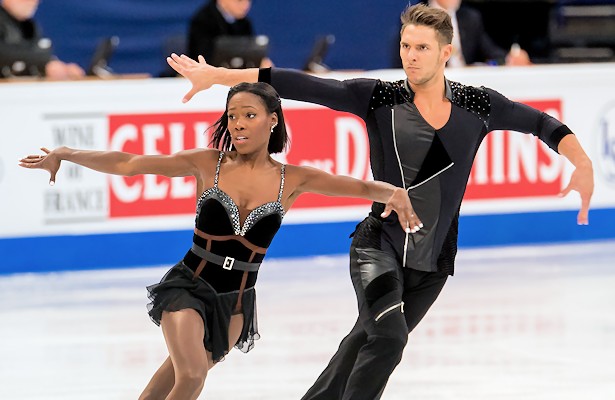 At the end of the 2015-16 season, French pair skaters Vanessa James and Morgan Ciprès were not sure whether it was worthwhile to continue to compete. However, by the end of the 2016-17 season, they had won their first medal at Europeans as well as the pair skating competition at the 2017 World Team Trophy with new personal best scores. This major turn-around was prompted by a coaching change and complete change of environment. Now, heading into the Olympic season, James and Ciprès are part of the top pairs teams in the World that can dream of a medal in Pyeongchang.

“It was a different season for us,” said 26-year-old Ciprès. “We changed our team and we started many things from scratch and changed a lot, like our programs and our ways to work. We had a good season after all. We are happy with what we achieved, like the podium finish at the Trophee de France, and we finally were able to get on to the podium at Europeans with a strong performance. The World Championships weren’t as good, but we still had a much higher score than last year. So it was a good season for us.”

“I think we changed places for next year,” James, 29, added. “Next year, instead of fighting trying to move up, we are already in a different group now, at a different level. So we’re starting right where we need to be to be at the top for the Olympics. It’s cool.”

Things did not look that good at the end of the season a year ago. The skaters, who had teamed up in 2010, felt like they had not make enough progress. The pair had finished sixth, fifth and fourth since starting to compete at Europeans in 2012. They came close to winning a medal and were third in the short in 2015, but then dropped out of the medals in the free skating.

“We decided we needed a change, because being fifth and fourth at Europeans and eighth to tenth at Worlds wasn’t good enough for us,” explained James. “We didn’t want to keep doing that until the Olympics. It was either we stop now or we need a big change.”

The skaters looked at several options, but some of the coaches they would have liked to work with, such as Bruno Marcotte in Montréal or Dalilah Sappenfield in Colorado Springs, have a lot of teams already, including direct competitors. James remembered U.S. pair skater John Zimmerman, who won a World bronze medal with Kyoko Ina in 2002 and who is coaching with his wife Silvia Fontana in Florida.

“I saw John Zimmerman skating before with Kyoko and he was very athletic, very strong, really innovative lifts and transitions and I was like – I think he can do it,” she observed. “I didn’t know he had a team in the beginning, I just asked him and he said he has a team set up and he was willing and we would be the priority. He had some teams, but they are younger teams and he has no direct senior level competitors, so it was like jackpot.”

Zimmerman wasn’t in a rush to change anything as he first wanted to get to know them, observe their skating, and how all of them would interact as a team.

“After a local competition, I was thinking there was something that needed to be tweaked, but wasn’t sure exactly what it was,” he recalled. “I still didn’t want to jump in and change things too much, but as we neared Skate America, I could see the pressure building. When we got there, I could see what made this team great, as well as what could be improved. We worked on communication, their relationship with each other on the ice, and self confidence. I kept it positive and motivating at practice.  It of course made the difference that we had a team approach.”

It turned out to be the perfect choice. Not only Zimmerman and Fontana found the right approach to the skaters, but together with former ice dancer John Kerr, they created programs for them that suited them perfectly with “Earned It” by The Weeknd for the short program and “Sound of Silence” by Disturbed for the free skating. The fans especially liked the free so much that they hoped the French would keep this program.

“We could have kept it, but the judges maybe want to see a new program, and in the Olympic season, it is probably better to do something new,” Ciprès noted. “People like it, yes, they want to see it now, but when you only see that for next season completely, I think it’s going to be boring,” James added. “I think we have to try to find something innovative.”

At press time, the team had not announced yet their choice for their new programs.

“We all felt we had two very cool programs this past season,” Zimmerman offered. “One thing this team has is incredible emotions as they skate and towards each other in general. Stuff you can’t really teach, but that you can help guide. Finding something that’s emotional that evokes from the feelings from the audience—good or bad—that’s the mission this year. ”

James and Ciprès already include the throw quad Salchow into their free skating and feel it is worth the risk. They are now contemplating trying a quad throw flip.

“Considering now my triple flip is pretty high, sometimes I mess it up, because it is too high and I’m too open in the air,” James explained. “The quad Salchow is still very risky, it’s difficult, but I think like the men, when you try more quads they’re going to get consistent. I think if you get used to doing four turns every day in other jumps, the quad Salchow will get easier and the flip will get maybe consistent.”

“Maybe we’ll work on the quad flip this summer and we will see how it goes,” added Ciprès, but he is skeptical about risking two quad throws at the Olympic Games. “I think next year it will be very close with the results, because there are five, six teams that are at a very high level and in the same group. The ones that don’t make errors will win the medals.”

Following their success this past season, the French skaters have set clear goals for the next year.

“Our first goal is to get programs that are just as good or better than (last) year,” James offered. “It’s difficult for us, but I’m confident. We weren’t sure about the short program, but we’ve been getting really good scores even with errors, and we did get second in the short program at Europeans. That would be great if we can get second overall at Europeans.”

Her partner looks further than that: “The goal are the Olympics. Maybe win, maybe touch a medal, we will see.”

Beyond Pyeongchang, the pair is planning to compete for one more season.

“We won’t continue until the next Olympic Games, that’s too long for us,” Ciprès confirmed. “Maybe one year after the Games, that depends on how next year goes and if we’re still skating well and we are still enjoying it.”

James, a bit jokingly, suggested he could continue with a new partner since he is three and a half years younger, but Ciprès seemed a bit reluctant about that idea. “Maybe I’m younger, but to restart with a new partner it’s going to take too much time maybe. I only skated with Vanessa. I don’t know if I can skate with someone else.”