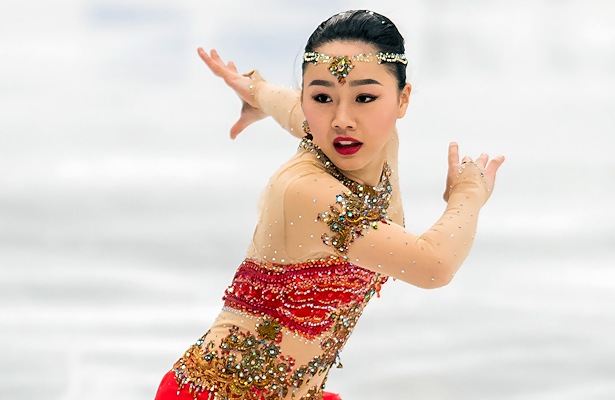 Following the retirement of Mao Asada and Kanako Murakami, the attention in Japan is shifting to the next generation of ladies, and Wakaba Higuchi is one of them. The two-time World Junior bronze medalist had a respectable senior debut this past season.

The 16-year-old drew attention, especially at the 2017 World Team Trophy last month in Tokyo, Japan. She impressed with strong performances and set excellent personal best scores – 71.41 points in the short program and 145.30 points in the free skating. Additionally, she landed some triple Axels in practice.

Overall, the three-time Japan senior national medalist had a good first senior season as she took bronze at her first Grand Prix in France and placed fourth at NHK Trophy. She also qualified for Worlds where she ranked 11th. However, the ambitious skater was not quite satisfied with everything.

“When I moved up to the senior level this season, I expected some results, but it was difficult,” Higuchi admitted, “but it got better at the end of the season. I have watched the seniors on Youtube and TV, but it was still very different to compete as a senior. The main point is, when you miss one element, you are way down.”

Nevertheless, the skater, who is coached by Koji Okajima and Noriko Sato, doesn’t feel too much pressure despite that. The senior ladies that impressed her the most were USA’s Ashley Wagner and Canadian Gabrielle Daleman.

“I liked Ashley’s expressive short program,” she noted. “I also was impressed by Gabby Daleman – she is so strong.”

The triple Axel is on the top of Higuchi’s list for the next season, and she plans to include it in the free skate. She also wants to show more strong and powerful skating overall.

“I have trained the triple Axel a lot,” the teen from Tokyo said. “Last year, I started doing it with a harness. The first time I tried it two years ago, but it wasn’t so serious. So last year I really started working on it. It is a bit scary. I had some hard falls and I got some bruises.”

Despite the painful falls, she is pushing forward with the element – a jump that only Japanese junior skater Rika Kihira successfully attempted this past season among the other ladies.

“I know it is a big risk to try the triple Axel, but when it is successful, I feel so good and I like the challenge,” Higuchi said, smiling.

Since her junior years, the Japanese skater, who describes herself as “never giving up, being a challenger, and cute and cheerful,” has been well known for her dynamic skating and speed, and she lists those as her strong points.

“Everybody knows that my skating is powerful and I have good speed and I am quite consistent,” noted Higuchi, who began skating when she was three. “Another important point is that I can keep my focus in competition and achieve good results. That’s how I got second at nationals. After moving up to the senior ranks, I tried to express more emotions when skating and my speed has dropped a little, I think.”

At the same time, Higuchi feels that she has still a lot to improve.

“It is hard to give a perfect performance,” she pointed out. “I have maybe a good result, but the performance is not as perfect as I would like. I am a perfectionist and I want to be perfect every time.” However, when disappointment strikes, the high school student is able to move on quickly. “I sleep over it and forget about it. I might take a walk and relax.”

Higuchi has not yet made a final decision about her programs for the upcoming season.

“I would like to get back the speed,” she reiterated. “I will change both programs for next season. I want to have emotional, and at the same time, cool programs.”

Higuchi knows it will be tough to qualify for the Olympic Games as Japan is down to two spots for the ladies and Japanese champion Satoko Miyahara is expected to come back from her injury. Add to the mix 2017 Four Continents champion Mai Mihara, as well as 2016 World Junior Champion and 2017 World Junior silver medalist Marin Honda, and you get the picture.

Notwithstanding, Higuchi will make sure she is competitive in Japan and internationally and you can expect her to fight for her place on the team with everything she has got.