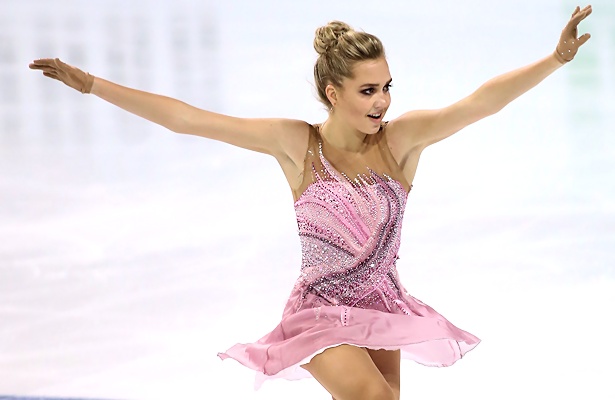 However, puberty struck and the two-time European silver medalist started to struggle with consistency, failing to make the Russian European and World team this past season. To be fair, trying to make the Russian ladies’ figure skating team is currently a tough task due to a tough and competitive field. Nevertheless, Radionova ended the season on a high note with strong performances at the 2017 ISU World Team Trophy.

Radionova announced a coach change a few days after World Team Trophy in late April. She stayed in the Central Army Sports Club (CSKA) where she has been training since childhood under Inna Goncharenko, but is now coached by Elena Buianova (Vodorezova) and her team.

“I think I had to make a change, because, unfortunately as much as I am grateful to Inna Germanovna (Goncharenko), we lost that connection that athlete and coach need to have and there wasn’t anymore the kind of work you need to get a result,” explained Radionova, speaking on the phone from Moscow. “We were together for a long time, but unfortunately we didn’t have that relationship anymore that is required to achieve a good result that would have satisfied both of us. Therefore, I decided to switch to Elena Germanovna (Buianova).”

The skater added that switching coaches was not an easy decision for her, but it helped that she remained in her old environment.

For Buianova, who has known Radionova since she was a child, the change came unexpected.

“She always has been training next to us. She is our girl. I know her pluses and minuses, her problems and I know that Lena (Elena) does not have an easy character.” she offered. “But it has to be that way. Other skaters, if you look at the character, don’t get that far. We don’t really have time to think, we need to get to work right away and we are in the process of learning to understand each other.”

Meanwhile, Radionova has completely adjusted and feels comfortable in her new training group and with her new coaching team.

“The practice has changed a bit, but I can’t say that it has totally changed,” she noted. “I like it a lot, we have a good contact with Elena Germanovna (Buianova), the work is going well and we’ll wait for the test skates.”

Radionova now shares a coach with Maria Sotskova, one of her direct competitors, but they are not training together at the same time. The coaches decided to separate them.

“We have different training times and each of us is focused on herself,” the 2015 World bronze medalist explained. “Elena Germanovna (Buianova) knows what is better and I trust the coach fully. I am not watching anyone else, I am only focused on my own work. I don’t see anyone else on the ice except myself.”

The preparations for the important Olympic season are well underway. In June, the training group went to Courmayeur in the Italian Alps for a three-week training camp.

“We started to prepare for the season there,” said the two-time Grand Prix Final medalist. “Now we are back in CSKA and we are getting into shape.”

After the season ended, Radionova went to Canada to work with choreographer Shae-Lynn Bourne. She decided to keep her short program to “Porgy and Bess” by George Gershwin as she felt this program suits her very well. The long program is new, but the skater is not yet ready to reveal the music choice.

“I don’t yet want to open all secrets,” said the 18-year-old. “For the free, I took a style that I never had before. We decided to show me in a new character. It will be interesting for the spectators. It is an emotional program. I like it. When we chose the music and Shae-Lynn choreographed it, it went really well and everyone liked the music—the coaches, the choreographer and I myself.”

Even though Radionova won gold medals last season at the Grand Prix in Beijing and at the Winter Universiade, she is not entirely happy.

“There were some good performances as well, but I am used to always giving the maximum and for me, even one mistake means that it was not a good skate. I always have to skate a 100 percent,” she explained.

Overall, it was a tough year for Radionova, who struggled with injuries and the difficulties that come with growth which affected her skating.

“I had to get used to my new body and to heal injuries,” she pointed out. “I have grown, not so much anymore, but each change affects the technique and you have to get used to it. The feeling on the ice is different – yesterday it is this way and today it is that way. You need to adapt in order to control your body. But the most important thing is to believe in yourself and not to give up and that is in my character.”

Like many athletes, Radionova feels that the obstacles she had to go through eventually make her stronger.

“(Those) who have a strong character can overcome everything,” she commented. “(Those) who don’t have a strong frame of mind will not be a champion. Everybody has injuries, is growing, changing, has to adapt. Who can overcome all that will be on the top. I never give up and I am not desperate. I just need to move forward.”

Radionova feels that the support of her parents, especially her mother, is helping her. The skater is very close to her mother. “She knows absolutely everything about me. She is always there for me when I need her support and she pushes me if necessary.”

Obviously, Radionova’s biggest goal is to make the Olympic team, but she knows how tough the competition is.

“The Olympic Games are the biggest competition in an athlete’s career,” the two-time European silver medalist noted. “Everyone wants to perform there. In order to make the team, you have to be consistent, and to improve in everything – skating skills, spins. I know how I can skate and I have to work very hard.”

For the next two months, Radionova most likely will continue her preparations for the season at her home ice rink in Moscow. The first major event of the season will be the test skates on September 9 and 10 in Sochi. The Muscovite also plans to attend some competitions outside the Grand Prix series, but doesn’t know yet which ones.