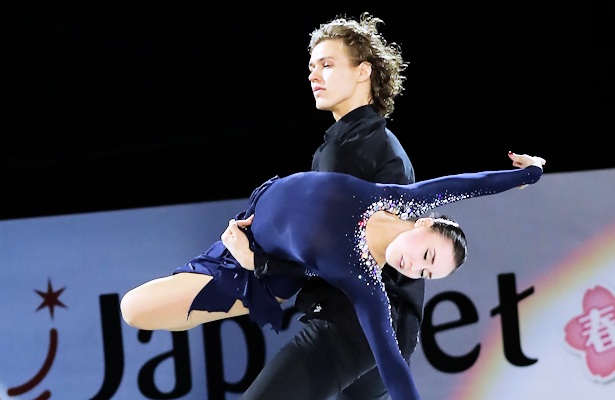 Russia’s Alla Loboda and Pavel Drozd perform to ‘The Winner Takes It All’ at the 2017 World Junior Figure Skating Championships.

Russian ice dancers Alla Loboda and Pavel Drozd are now preparing for their senior debut this fall following a successful season as juniors last year, and hope to make an impact right away. The World Junior silver medalists are hungry to prove themselves, especially since narrowly losing to U.S. ice dancers Rachel and Michael Parsons at the 2017 ISU World Junior Figure Skating Championships last March.

“After coming back from Junior Worlds, we rested for only one week and then started our preparation for the new season,” said Loboda, 18. “Last season was not easy. After winning the short dance (at Junior Worlds), we unfortunately were not able to take the gold in the free. It was a bit upsetting, but it also us gave motivation.”

“You can call our last junior season ‘successful,’ but the only thing we regret a little was that it was a bit bumpy,” added Drozd, 21. “Unfortunately, the only thing we did not achieve was to get the World Junior title.”

Earlier last season, the Russians won both their Junior Grand Prix (JGP) events and then took the silver at the 2016-17 ISU JGP Final. They also won silver at the 2017 Russian junior national championships. After the season was over, the ice dancers sat down with their coaches Ksenia Rumiantseva and Ekaterina Volobueva examine and evaluate the season.

“We said that life does not end with junior sports and now we are entering a new phase in our figure skating life,” said Drozd. “We are opening a new chapter for us, the senior level. There, everything will be totally new and different. Therefore, we decided to draw the conclusion that bottom line, we are overall happy with all the work we’ve done as juniors. We reviewed our shortcomings and mistakes that stopped us from getting results faster in order to fix that and to move on to the senior level successfully.”

After their vacation in May, Loboda and Drozd began the new season full force with a hard six-week training camp at their home rink in Moscow.

“We went out on to the ice on June 1 in (our rink) Khrustalnyi,” Loboda recalled. “We were working from 9 a.m. to 8 p.m., with a one and a half hour break. We had off ice training, choreography, ballroom dance, and ice. Sometimes it seemed unbearable, it was very hard, but we lasted through one and a half months of this hard work. Pasha (Pavel) and myself did not miss one single day, so big was our desire to prove that we are capable of something.”

French choreographer Benoit Richaud joined the skaters during that time and they mounted the free dance with him. The skaters created the short dance together with their coaches and choreographer Igor Rasporski. While the team isn’t ready to reveal their music choices, Drozd shared some information about the programs.

“I can say (about the free dance) that we took a completely different character and many people did not imagine us in this character,” he said. “It is quite an interesting program and a big thank you goes to Benoit Richaud for this. We really hope that the judges, experts and people that are following us will appreciate and notice this change and that it will be successful for us.”

“As for the short dance, we picked very interesting music,” he continued. “I think it will be in the taste of many people. I really hope for that, because we took a long time choosing the music. We did not want to be banal, didn’t want the very classical Samba, Rhumba or Cha Cha. We wanted to observe all rules and the rhythm, but wanted to take something new and more modern.”

The Rhumba pattern dance is new for the skaters and they worked with compulsory dance expert and 1980 Olympic Champion Gennadi Karpanossov and other specialists on it.

The 2016 Russian Junior champions are looking forward to testing themselves at the senior level. Their first Grand Prix (GP) will be at Skate Canada and they are excited about skating alongside 2010 Olympic champions Tessa Virtue and Scott Moir.

“We have to skate decently as we will be the only ice dance couple from Russia there,” Loboda noted. “Our other Grand Prix will be in France and Gabriella (Papadakis) and Guillaume (Cizeron) will be there. We will watch and learn.”

“It will be our senior season debut, and talking about my emotions, they are positive,” Drozd added. “It is something new in life, something I am happy about. Obviously, we are opening a new chapter of our story. It is a challenge, because we need also to show that we have grown, that we have changed and that we are really ready to move up to seniors. We are working a lot on that and we really hope that we will be able to prove that we have changed, not only in our skating, but also inside, and maybe that will add some color to our skating. Maybe yes, that will be a challenge, but we are approaching it calmly. We are not nervous or afraid.”

The skaters are not setting too big of goals for themselves for their first year as seniors. They want to show that their work ethics have changed and that they have become more grown up and responsible.

“We are not looking at specific placements at specific competitions,” Drozd offered. “The first and most important goal that we set for ourselves together with our coaches is to show ourselves at the senior level. We want the spectators to like us, the experts to notice that we have grown and that our skating has become mature, and that we can manage this transition to the seniors. We really want to put ourselves out there for the future and present ourselves as a strong senior team, not only at the Russian Championships in December, but basically at all competitions, including the Grand Prix.”

The first outing for the team will be at the test skates of the Russian Figure Skating Federation on September 9 and 10 in Sochi. Loboda and Drozd are also planning to attend a Challenger Series event and probably an event of the national Russian Cup series, but don’t know yet which ones.

Despite their busy training schedule, the dancers are trying to live a life outside the rink.

“The training process occupied a lot of time in summer, and rarely, but sometimes, I managed to go to the theatre,” Loboda shared, who is also taking driving lessons. “This year, I also started to enjoy cycling in the city center. This distracts and de-stresses me. I hope to get my driver’s license soon, but most of my spare time I am reading.”

Drozd, who is in his final year at university and will have to write his thesis, also enjoys going to the theatre and exhibitions. When possible, he likes to travel to his native St. Petersburg over the weekend. He studies foreign languages, first English and Spanish, and has now also taken up Italian and French.

“Sometimes French is a bit difficult, but it is a very interesting and beautiful language,” he said. “Learning languages broadens our mind and opens new horizons. Obviously, I still need to improve, but step by step I am learning these languages. Maybe one day I’ll get to Japanese or Chinese.”