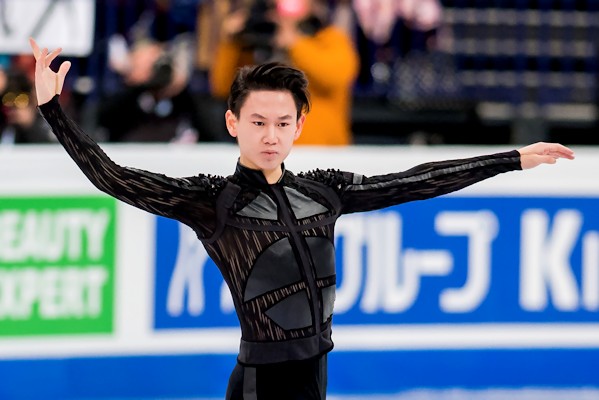 Although Denis Ten is only 24 years old, he has already written sports history by becoming the first figure skater from Kazakhstan to win an Olympic medal and World medal. However, the 2014 Olympic bronze medalist has also seen his share of “downs”–especially during the last two seasons–in his competitive career that started ten years ago.

Ten’s progress was often interrupted by injuries, specifically at the 2017 ISU World Championships 2017 last March in Helsinki, Finland, when he finished 16th –his lowest result since 2009. However, Ten secured an Olympic spot for Kazakhstan and is now looking forward to coming back strong for the Olympic season.

“It was not an easy season, but at the same time it was useful,” Ten recalled of last year. “There were some unforgettable moments like the Universiade at home (in Kazakhstan) and the French Grand Prix (in Paris), but also some rather gloomy events that were not successful by far.”

The 2015 World bronze medalist felt that he was searching for his “new” self and for fresh motivation for the sport. “It was a kind of experimental year, but in reality it gave me a lot,” he elaborated. “I tried different training plans and drew conclusions for what works better for me.”

While Worlds was disappointing for Ten, he felt energized by meeting IOC president Thomas Bach, who had come to Helsinki to watch the competition. The skater had met Bach before as he was part of the Kazakh delegation that bid for the 2022 Olympic Winter Games that were eventually awarded to Beijing.

Two weeks after Worlds, the 2013 World silver medalist started his preparation for the upcoming season at training camps to improve his condition and to take care of his chronic injuries. As usual, Ten gets around a lot, splitting his time between various training locations.

“During this off-season, I practically did a trip around the world,” he shared. “As part of different training programs, I was in Russia, Italy, Canada, and the U.S.A.” In August, Ten also went to Japan and Korea to participate in various shows. “I will return to Los Angeles for further training, but clearly I am not the same as I was before.”

The 2017 Universiade Champion had trained under Frank Carroll in the Los Angeles area since 2010, but mostly worked with Nikolai Morozov last season.

The skater is now preparing for his third Olympic Games. In 2010, he was a newcomer who had turned heads the year before at Worlds where he placed 8th. He finished a respectable 11th in Vancouver. In 2014, Ten was a medal contender after taking silver at 2013 Worlds, and he claimed the bronze in Sochi. The 24-year-old is a dark horse heading into Pyeongchang.

“These Olympic Games will be special for me. First of all, because they are happening in Korea,” said Ten, who has Korean ancestry. “I have a special bond to this country, spiritually, as well as concerning results. In Korea, I won my very first international award and most interestingly, it was not connected to sports. It was the silver medal at the 2002 Choir Olympics that were held in Busan.”

Ten also enjoyed success as a skater in Korea when he went to the Junior Grand Prix Final in 2008 and won the 2015 Four Continents Championships in Seoul, achieving his personal best scores. The multiple national champion now hopes to overcome his injury problems and to be able to perform the way he knows he can.

“The Olympic Games are a special event, in a double way for me, considering the status and the place of this competition,” he noted. “Therefore, I hope to overcome myself, to show outstanding skating and to leave a legacy.”

This summer, Ten has worked with choreographers Benoit Richaud and David Wilson on his new programs. Like other skaters, he is not yet ready to reveal the music.

“The programs this year have a special character,” he volunteered. “I would like to unite my best strengths in them. The free program has become a peculiar symbol for me. The short program has a reverent feeling for me. The idea was born out of amusing situations, but the most valuable for me, is that the music is performed by a Kazakh artist.”

Men’s figure skating has recently seen an explosion of quads with some skaters including four or five quads in one program. Denis acknowledges that these are extraordinary times and that the skaters have become part of the “colossal” technical progress of this phenomenon.

“Figure skating never was like that before, and today, it is obvious that the sport chose its vector for years to come,” Ten pointed out. “Standards have come up, not only in the technique, but even in the physiology. Once, there was the period of the battle of Alexei Yagudin and Evgeni Plushenko that pushed a galaxy of athletes forward. There was the period of artistic personalities that gave us the unforgettable programs of Stephane Lambiel, Daisuke Takahashi, Jeff Buttle and others. Each athlete influenced the generation that competed after them. Today, there is a new tendency that creates an absolutely new contrast and this again, will not go by without leaving a trace. To me, this is great. It is great for the community of our sport that comes into contact with a new chapter in the transformation of a whole era of figure skating.”

The 2014 Olympic bronze medalist was glad to receive two Grand Prix assignments. He has been selected for the first Grand Prix of the season, Rostelecom Cup in Moscow, Russia, and for the fifth event, the Internationaux de France in Grenoble. In order to get a good feeling for competitions, Ten hopes to compete in some Challenger events as well. At press time, he was not able to announce which ones yet.

Off the ice, Ten is pursuing his MBA studies at the Kazakh-British Technical University in his hometown of Almaty.

“As of today, I have completed practically all basic subjects in business administration and I still have to do the specialized classes and my internship,” he said.

Due to his skating career, Ten cannot study at the same pace as regular students, but he likes to take additional online classes when he has time. In his spare time he enjoys creative hobbies such as photography, writing, project planning, music and animation. He has written songs and also teamed up with a Kazakh artist to create Animes. The first result of this collaboration will soon be available in the Japanese messenger LINE. The skater will also appear in two movies, one is a short film for the Olympic Channel and the other is an independent production.

However, Ten will be fully focusing on figure skating for the upcoming season and is keeping some doors open at the end of the season.

“Today, analyzing my options, I don’t know how long I’m going to skate,” he said. “There is a high probability that after Pyeongchang I will remain in the sport, but at the same time, you cannot discard the thought that the ‘day X’ will come. (Eventually) I will have to take the decision that each professional athlete has to take.”