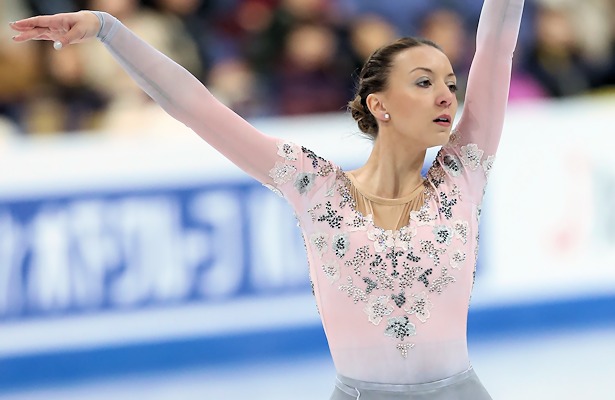 Following Worlds, the skater went on vacation, first to New York with her younger sister Vivian. Vivian happens to be an ice dancer and is currently looking for a partner. Schott then went to Portugal with her boyfriend, an alpine skier. Afterwards, she went to a seminar with the German Army in Warendorf.

Schott, whose father is originally from Poland and was a competitive ice hockey player, started her intense preparation for the season at the IceDome training camp in June. The camp first traveled to Finland, then to Oberstdorf and Italy before returning to Oberstdorf at the beginning of August.

“I am very pleased with my preparation and I am much more advanced now than I was in the past years in summer,” said the two-time German Champion. “We are working a lot on the programs.”

The knee injury that kept her out of nationals at the end of 2016 does not bother her much anymore. “Sometimes I feel it a little bit, but I am doing physiotherapy and therefore it is fine.”

“It is true that she is much more advanced than last year,” coach Michael Huth confirmed. “What I can say and I am happy to say it, is that Nicole has been developing more as a holistic athlete since I have been working with her. In this phase, we are now maybe starting to reap the fruit of our labor.”

“I like it that she does things that I don’t have to tell her anymore,” he continued. “When I want to tell her something, she already did it. That is good and it is fun to work with her.”

Schott happily shared details about her new programs. She will be skating to “Nella Fantasia” by Jackie Evancho for the short program and music from Schindler’s List for the free skating.

“There are two pieces of music that I always wanted to skate to in an Olympic season. One of it is Schindler’s List, the other one I won’t reveal yet, I will keep it for later,” she said, laughing. “We picked it also, because it is more difficult than what I did before.”

“You want to grow and you are growing with the programs,” she explained. “I think it was a good choice for me. This kind of sad music is my strength. I am not someone who could skate to Don Quixote. Schindler’s List is one of my favorite pieces of music.”

“Nella Fantasia” was a suggestion of her coach of three years. Huth also choreographed the programs, while Vanessa Gusmeroli and Rostislav Sinicyn helped to polish them.

Schott is not intimidated by other recent skaters who have had great routines to Schindler’s List, such as Russia’s Julia Lipnitskaia’s program in 2014.

“I think she (Lipnitskaia) told a different story,” the 20-year-old pointed out. “She was the little girl in the red coat and I am not a little girl anymore.” However, she admitted that it was not so easy for her to interpret the music. “At the beginning it was hard for me to get into it. This (history) is far away from me. I know it only from movies and from school.”

Technically, the German skater plans to upgrade her content by adding a second triple flip. “At the moment I am not planning to do a Lutz, because it is still from the inside edge,” Schott elaborated. “We are working mostly on getting the edge right, but it is not worth it to do the Lutz as long as it is from the inside edge. It is better to do a nice flip instead.”

The Olympic season is looming on the horizon, and this is not lost on the skater who has won three senior international medals.

“Like in any season, you want to go to the big events and the Olympics are the highlight, of course,” she acknowledged. “It is on your mind that we have the Olympics and this is the most important season. I am focused and I am goal-oriented.”

“I would lie if I said that my world would not come down if it doesn’t happen (to go to the Olympic Games),” admitted Schott. “You are not working so hard for nothing and the past season was really good. If you secure an Olympic spot, you want to get it for yourself.”

However, Schott does have competition in current German Champion and 2014 Olympian Nathalie Weinzierl, former German Champion Lutricia Bock and up and coming Lea Johanna Dastich, who ranked eighth at Junior Worlds. Nevertheless, she is determined to remain on top in Germany.

“I will approach the season like last year and always try to do my best,” said Schott. “You always want to be the best, and when you are training well and when you are able to bring that to competition, you hope that it works. I do not know what the others are doing and how they are doing. I am focused on myself and I don’t care for everything else around me.”

The Cup of Warsaw Champion has been based in Oberstdorf since summer 2014 and it does not bother her that she is the only German top lady right now there.

“We are only a few skaters on the ice and that is perfect,” she commented. “When I was (at the training camp) in Italy, Carolina (Kostner) was with us on the ice and she is always a great stimulation and motivation. She always has been my idol.”

Schott is friends with Norwegian skater Sondre Oddvoll Boe, who trains with her in the same group. “We are a really good team,” she pointed out. “When one of us notes that the other one is not doing so well or it doesn’t go well, then we support each other.”

When the skater has spare time, the rink is not a place where she wants to spend it. “My boyfriend is an alpine skier and my other friends are not skaters and I think it is better like that so you clear your mind,” she explained.

The NRW Trophy Champion plans to start her competitive season in October at the Cup of Nice in France.

“I realized last year, the later it was in the season, the better I got,” Schott observed. “Obviously, the jumps are getting more solid in the programs. I have three Challenger events that are important – I want to compete in Warsaw (Poland), Minsk (Belarus) and Tallinn (Estonia) or Zagreb (Croatia).”

The German Skating Union will select the team for Europeans and the Olympic Games based on not only on nationals, but the results of the season. So far, Schott has not yet been selected for a Grand Prix event, but is still hoping to get an assignment as a substitute.

Huth is optimistic for the future of his student. “We would be happy if she can show her progress in competition. She has improved steadily last season and that was good. She made the best out of the season, in spite of the (knee) injury. She needs to stay healthy, then we will see.”

“I said at Europeans (2017) that she might compete for a medal at the Europeans in 2020, and I do think she is capable of it,” he concluded.