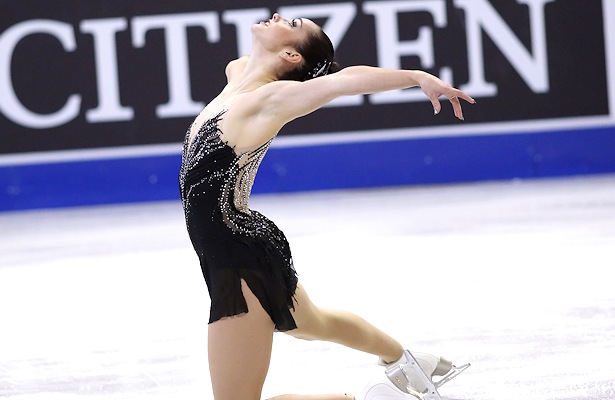 Canada’s Kaetlyn Osmond won gold in her first Grand Prix event of the season at 2017 Skate Canada International in Regina, Sask., Can. Russian Maria Sotskova came from third place to win the silver, while USA’s Ashley Wager settled for bronze.

“It’s really great,” Osmond said of the achievement of her second Skate Canada International gold medal since 2012. “I am mostly just really happy with how I skated, but to be able to continue my results from last year, it means a lot to me. Being here and skating two strong programs, it means a lot to me. I feel a lot stronger.”

Osmond began her campaign for victory with a blade-perfect short program set to Edith Piaf. She flounced, flirted and flew her way to a personal best score of 76.06, her soaring triple flip-triple toe loop combination highlighting the routine.

The 2017 World silver medalist continued her success with her free skate, displaying a balanced lyricism and intensity in keeping with the “Black Swan” character. Only two noticeable jumping errors: a step out on the triple flip-triple toe loop combination and a fall on her closing double Axel. She completed the competition with 212.91 points.

“The boards got in my way on the flip-toe,” Osmond reflected. “When I am feeling a bit nervous, I will push a bit harder. The flip took off really big and covered more distance than I expected.”

Mistakes aside, the 21-year-old was pleased. “As a package, I felt this program was a lot stronger. I felt a lot more confident in it. It’s a great starting point. Score-wise, I am where I was at the Grand Prix Final last year, so I’m a couple of month ahead this year and hopefully it will keep going.”

Sotskova claimed the silver medal behind Osmond with two sturdy and soft programs framing her steadiness. She was awarded with a total combined score of 192.52.

Peter Tchernyshev choreographed the elegant “Swan Lake” long program. “At first, I don’t like it, but after we started composing the program, I am just absolutely in love with this program and for me, it is a big pleasure to skate every day. I love it.”

Sotskova particularly impressed with her newly-learned jumping technique of holding her arm over her head, similar to teammate and two-time World Champion, Evgenia Medvedeva. The skill is now becoming second nature and familiar.

“I decided to make my arm up because it’s a little bit difficult,” shared the 17-year-old, “but now for me it is easier than a normal jump. I think it’s better because I try to do something new for me and I want to do better.”

Wagner was the surprised bronze medalist, rebounding from a flawed short program that put the American in seventh place, with a dynamic and passionate free skate to her familiar “Moulin Rouge” routine. Several audience members gave the fan favorite a standing ovation. Wagner completed the event with a total score of 183.94.

“My whole plan is building up until the Olympics, so for me to go and put a clean program out is something I’m pleased about,” said the three-time U.S. National Champion said of her free skate, which included three under-rotation and one edge call. “I usually do not second guess calls. I do not agree with a lot of the calls that this panel is making for a lot of people, but it is the name of the game and I can’t leave anything in the grey area or even close to it. I just have to keep on training. I don’t think it’s anything about technique, it’s just about conditioning.”

“I was furious after the short program and at myself,” Wagner said of her drive to redeem herself in the long program. “I left a lot open on the table and I am not a first warm-up group-at-a-grand-prix-event skater. I am a better quality athlete than that and I put myself in those shoes. So it was one of those now or never, ‘do your job you’re here for a reason, you’re trained’ and I refused to put myself in that spot ever again. So that was it. I was mad and I got the job done.”

“This competition has really been a check-in point,” Wagner shared of her strategy not to participate in a Senior B competition in the pre-season. “My main focus is getting on that Olympic team and it’s definitely about getting stronger every time. It was about putting out two good performances that were sloppy, but sloppiness can be fixed. It’s not a mental issue whatsoever, so it makes me feel pretty confident that I have three weeks to train at home.”

In a dramatic switch, Russian Anna Pogorilaya dropped from second place after the short program to 10th in the long program and ninth overall.

“I had to overcome a lot of things in my training and also in my mind state and I had to work a lot on myself,” she said matter-of-factly, following her sturdy and sultry Spanish short program which showed a clear departure from her disastrous finish in Helsinki at the 2017 World Championships. “Nobody says life is easy. You always have to constantly fight and overcome things, but you just have to get up and move on.”

Pogorilaya’s long program to Black Swan was replete with errors including two falls.

Pogorilaya will compete next at Skate America alongside Wagner. Honda will compete at Cup of China next week. Osmond is scheduled to compete again in three weeks at the Internationaux de France along with Sotskova.