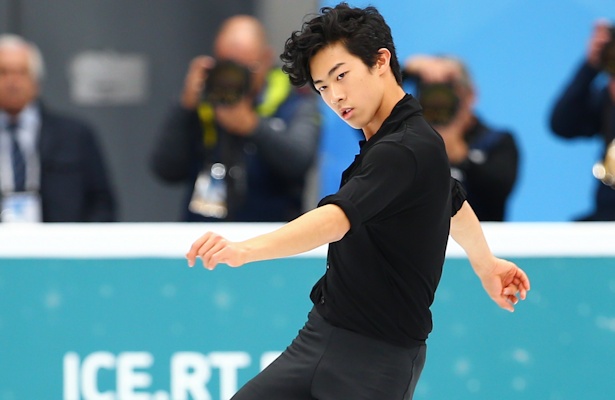 USA’s Nathan Chen performs his Short Program at the 2017 Rostelecom Cup in Moscow.

Chen started the competition strong with powerful performance to “Nemesis” by Benjamin Clementine, which featured a strong quad Lutz-triple toe loop combination and a slightly tight quad flip. The student of Rafael Arutyunyan picked up 100.54 points for his efforts. He was, nonetheless, rather cautious in his assessment of the first day of the competition.

“I am happy with the scores that I got and happy that I did a fairly clean program that early in the season,” said Chen at the press conference on Friday. “I definitely have a lot of work going into the Olympic Games, but I am happy with what I did and I just need to keep my mind straight and keep working hard.”

“For the short program, I decided to work with Shae Lynn Bourne this year,” he said regarding his program. “I really loved her work for Yuzuru and for other skaters. I saw Ashley’s [Wagner] personality coming through in her programmes and loved it and I thought this is something I would like to do for myself. When she first proposed the short program, I did not like it. It seemed too much like a show, but she showed me some movements and I thought they were cool. We added some hip hop edge to it, which I really liked, so we took off with that. It is really working at the stadium and helps during the performance.”

For his long program to “Mao’s Last Dancer” soundtrack, choreographed by Lori Nichol, the 18-year-old had quite an ambitious plan: a performance featuring five different quad jumps: loop, flip, Salchow, Lutz and toe loop. In the end, however, he felt that it was too risky and ‘settled’ for a more familiar layout of the Lutz, flip, Salchow and two toe-loops, one of which he popped into a double. Still, the 193.25 points for the free program was enough for the overall win by a 3-point margin.

“It [doing five different quads] is not a specific goal for me,” Chen said afterwards. “It was just something I figured is possible. It does not necessarily go the way you want it to go every time, so you have to re-evaluate and decide what is the best approach for any given day and just go on from there.”

“I just come back from another competition two weeks ago,” the 2016-17 GP Final silver medalist said. “I did not have that much time to recover and get ready for this. I tried to make use of the week in-between as much as possible.”

The skater divulged that the loop was not going well in this competition and didn’t want to rist it and put a lot of “weight onto one jump.” He decided to put more focus on the performance side of the program.

“It was really last moment decision, right before I stepped on the ice,” said Chen, who won gold at the 2017 U.S. Classic last month. “It was my plan B. The jumps I did today are the jumps I done all past season, so obviously having a year of doing the same content gave you a lot of confidence, much more mental assuredness. I think all of my work over the last two years kind of paid off.”

Because of his mistake on the second quad toe loop, the 2017 Four Continents Champion ended up with three double toe loops in one program, which is above the permitted maximum of two repetitions. Fortunately, the change of rules last year meant that he only lost points for the third double toe, not for the entire triple Axel-double toe loop combination he performed towards the end of his program.

“I always have plans B, C and D,” said Chen. “I helps me a lot, but sometimes there are little errors, like too many double toes. I have to make sure this is something to focus on so it won’t happen to me in the future.”

Overall, the skater from Salt Lake City, Utah was quite happy.

“This is my first actual Grand Prix win, so that’s really cool for me and to be up against Yuzuru and win, it’s a big deal,” he said. “Obviously, he won the long program, so I had a lot of work to do, but I want just to enjoy the moment right now and then to re-evaluate it for the next competition and move on.”

“I came a long way this past year,” he added. “Especially after the injury and coming back and having a year and half that I have, I am really proud of myself.”

The U.S. Champion claims that he does not feel any extra pressure this year.

“I simply trust my training as much as possible,” he summed up. “I put a lot of work on the ice back home. I just try to trust myself that it is possible to do these things.”

‘Practice’ and ‘work’ were the two keywords for Hanyu as well. The Japanese skater drew substantial crowds of his compatriots to Moscow, even to the early morning practices which were open for public. On both days after his performance, his fans pretty much covered the ice with staffed Winnie-the-Poohs.

Unfortunately, both performances were not up to his usual standards. In his short program to Chopin’s ‘Nocturne’ he underrotated a quad loop and fell out of quad toe loop-triple toe loop combination landing. In the long, he tripled the quad loop and doubled the quad toe loop. He did, however, land a clean quad Lutz for the first time in competition.

“I learned the most important thing. I need to rotate each jump, each element, each combo,” said the multi-record breaker. “I need to practice more. I can say that I am a little bit satisfied with this performance. Of course I made mistakes, like my loop, I did not rotate my loop, I did not rotate my combination and this lead to 3.05 points difference in the results. I also still have regrets from my short program. I realize again how important it is to practice more and that in skating, each element is very important.”

The student of Brian Orser, who scored 290.77 points in Moscow, well below his record score of 330.43 points, said that he does not feel any extra pressure to meet expectations of his fans.

“After experiencing so many competitions and working outside Japan, I realize how much support I need from other people,” the 22-year-old added. “I wouldn’t have done it without it. So it is not a burden for me to have these expectations. Sometimes when I can’t get the results I want, I feel that I am sorry and I feel that I have to apologize, but these emotions also give me motivations to perform better as well.”

For the Olympic season, the three-time World Champion went back to two programs he performed in 2015-2016 season: Chopin’s “Ballade No. 1” for the short and “Seimei” for the long.

“In figure skating it might be unusual for a skater to repeat the music,” Hanyu acknowledged, “but for me, for both programs, I have worked on polishing my ballet skills and I worked with the choreographer on the Japanese traditional movements, especially for “Seimei.” It’s very traditional and have been carrying on for ages and ages. Expressing that in the long program was both fascinating and interesting. I want to perform those programs in the way that I would make me completely satisfied.”

Kolyada also attempted a quad Lutz, but popped it into triple in the short program and fell on it in the long. He also missed a quad toe loop in the short and a quad Salchow in the long, but the remaining elements were good enough to earn him 271.06 points and a bronze medal at the opening ISU Grand Prix event of the season.

“I did the minimum that was required of me today,” said the student of Valentina Chebotareva after the end of the competition. “I rotated all the jumps. Of course, there were mistakes. I was too relaxed going into the last jump, but in principle. I liked my performance. I felt that I got into the character well and I hope there was enough energy for the audience and the judges. It was definitely enough for me.”

The 2017 Russian champion, who is known for his comic routines for the past two years, wanted to change up and try something new. His short this season is to Mozart’s “Piano Concerto No. 23” and an Elvis Presley medley for the long.

“For the short program we decided to try the lyrical style,” explained Kolyada. “As for the long, it was a spontaneous idea. We decided to give it a try, [thinking] ‘why not?’ It should be something quite interesting. I hope it is. Of course there is still a lot to work on, but I like it and I hope the others like it as well.”

Remarkably, the fourth place went to one of two skaters who did not even attempt a quad jump: Misha Ge of Uzbekistan. He scored 255.33 to edge out Mikhail Kvitelashvili from Georgia, who landed two clean quads (250.26) and Russia’s Dmitri Aliev, who stood third after the short program, but struggled with jumps in the free (239.61).