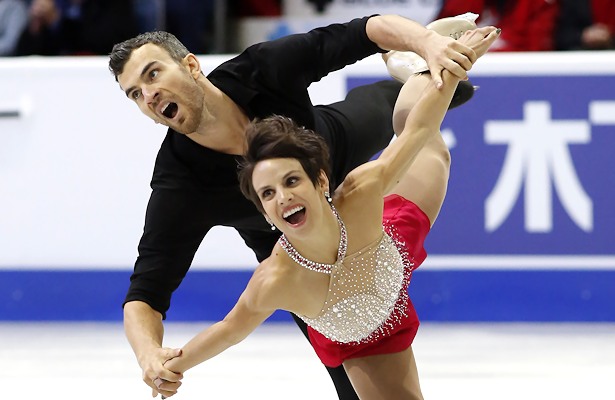 Packed with technical mite including side-by-side triple Lutzes and a throw quadruple salchow, the free skate garnered 148.69 points for the Canadians. The two-time World champions finished the competition with a total score of 222.22.

“This is the most emotional Skate Canada victory,” Duhamel said, holding back tears. “We have won a few Skate Canadas, but this definitely is one of the sweetest victories of our careers just because of where we came from to get here.”

The Canadians knew that with the depth of competition, they needed to put their best skate forward, and they felt the pressure.

“I think we had to keep our expectations quite low coming into this competition, but this is the most prepared and focused that we’ve felt,” Radford said. “You never know what’s going to happen in the moment, but this lets us know that it is possible for it to happen in the future.”

“I am sure many people wondered if we could ever do that too and it’s like we had this little string of hope left in us as we came into this season,” she continued. “This victory and this performance shows that everything we are doing is right. We are doing the right things. We made the right decisions this year and it’s going to be good.”

The long program to their revived 2014-15 season routine was a marked improvement from their “Without You” short program outing where Duhamel doubled her planned triple Lutz. She made good on the promise she made Friday night.

Overnight leaders Savchenko and Massot settled for silver despite innovative choreography and soaring release elements in their long program, however, they were not enough to offset Massot’s side-by-side jump difficulties. The team scored 215.66 at the competition.

“I felt good and I tried to do the best that I can,” Savchenko said. “We were really prepared for the long program and some jumps were not working and we will keep working.”

The 2017 World Championship silver medalists affirmed their commitment to the throw triple Axel although they doubled the difficult throw in the long program to avoid further injury to Savchenko. The team shared that Savchenko has injured her hip twice thus far this season, falling on the element in training.

“The singles are doing all quads. We need to grow figure skating,” asserted Massot. “The discipline has to grow, and we should not stay always in the same elements and always the same program. Everyone will have the same program if nobody is trying anything. We will land it. It will be clean. It needs more practice. We have only been together three years.”

Between the elements, the team also underscored the strength of their transitions and musicality. “The first thing we are searching is to not have the same music as someone else,” Massot said.

“We try to create art on ice,” Savchenko added.

Continuing their upward trajectory in the sport, James and Cipres were proud to clinch the bronze medal with secure, smooth and soulful programs. The 2017 European bronze medalists scored a total of 214.37 in Regina.

“I am completely proud of what we did,” Cipres said. “I am proud of Vanessa because we did a shaky warm up with two falls on the quad. Even with that mistake, she did it. I think it was a great battle this week between the Germans, the Canadians and us. We still have a lot of stuff to work on and we will keep going like this and see what happens.”

James was particularly relieved to perform so well on this season’s Grand Prix debut versus last year’s Skate America which was a disastrous finish for them. The memories lingered with her in preparation for Skate Canada International.

“This is the one really big mental part of the season for me and for us, remembering last year,” she explained. “We had a good Autumn Classic and then a beginning of a good season and then a good short clean and then a long catastrophe. I think it was a lot of mental work for me, one year from that catastrophe. I did a lot of mental work for me. It gives us more confidence into the next part of the season. It’s nice to skate like that.”

Natalia Zabiiako and Alexander Enbert of Russia were fourth (192.70) and Cheng Peng and Yang Jin of China were fifth (182.50).

The Canadians, Germans and Russians will compete next at Skate America. The French and Chinese will compete at the Internationaux de France.