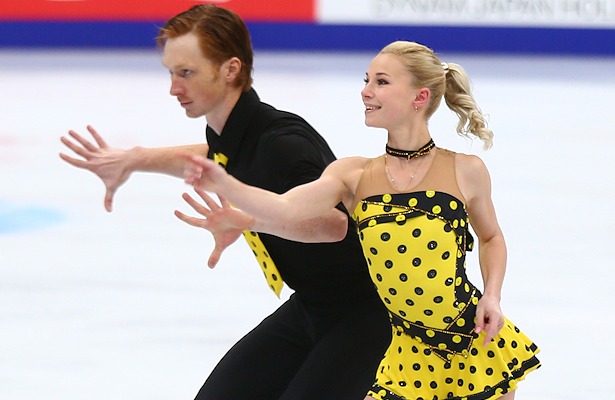 The 2017 European Champions Evgenia Tarasova and Vladimir Morozov were the clear winners at the 2017 Rostelecom Cup in the Pairs event in what was a Russian sweep. The confident victors led the pack, with teammates Ksenia Stolbova/Fedor Klimov and Kristina Astakhova/Alexei Rogonov finishing second and third, respectively.

Tarasova and Morozov delivered strong short program to “Piano Concerto No 2” by Sergei Rachmaninov which was marred only by a flawed landing of side triple toes. However, the team followed it up with a perfect free skate to a medley of Christina Aguilera’s songs which featured excellent level 3 quad twist. The students of Nina Mozer posted new personal best of 147.37 for the long and picked up 224.25 points in total.

“It went quite well and better than at our last competition,” said Morozov about their performance. “We are improving, so we are happy.”

“We have good feelings about this program,” the 24-year-old added. “We skated well already at two competitions in a row, so even though it is physically very demanding, we have no reservations about it. We are of course always very careful about our health, but we have no reason to think that we won’t be able to do it well with all the elements.”

Morozov went on to explain that their long program, set to a boogie woogie theme, was choreographed by Peter Tchernyshev.

“We picked Christina Aguilera’s songs,” he explained. “It’s in four parts. The first part was Zhenya’s, the second one was mine, and third one is like, I don’t know, flirting, and in the end we just dance together.”

“We watched World Cup in boogie woogie last winter and we loved the way the dancers dance and move,” Morozov elaborated. “We wanted to do it on the ice and we watched a lot of videos and competitions. We worked with Russian dancers. We have picked up probably the most famous songs written for these rhythms, because there are many other options, but they did not sound quite as well on the ice. It was difficult to choose the music as we had such a wide range of choices.”

“We asked the dancers for help,” added Tarasova. “They have us a disk with more than a thousand tunes, but together with Peter Tchernyshev, we have chosen Christina Aguilera.”

“There is a room for classical music in our skating as well,” said Morozov. “Our short program is set to classical music, in a typical Russian pair skating style. We are happy that the rules were changed and lyrics are now permitted and we are able to do our new long program to boogie-woogie. It’s great to be able to do both.”

In contrast to their younger teammates, Stolbova and Klimov struggled with jumping passes in both programs. In the short, Stolbova uncharacteristically fell on triple toe loop, but all other elements were clean.

“I would say it was a fluke,” said Klimov about the mistake at the post event press conference.

However, their Saturday’s performance in the long seem to indicate that there were more serious issues at hand than simply being unlucky that one time.

The team was forced to withdraw from pre-season test skates as Klimov underwent surgery in the summer and did not train in full until early September. They appear to still be making up for the lost training time. In their free skate, they missed both throws, which are usually their signature elements, and Stolbova missed the triple toe loop again. They had to settle for a silver with only 204.43 points in total.

“It was ok,” said Klimov. “What we did, we did well, what we did not, well, it was jumps and throws and we still believe it was accidental errors and we just have to work more.”

Nevertheless, the team has solid material which they enjoy for the Olympic year. The students of Nina Mozer said that the short program was an easy choice for them: Stolbova heard an unusual arrangement of “Bessame Mucho,” showed it to the team, and that was it.

The long program, on the other hand, was a more complex matter.

“We had a lot of issues with our long,” explained Stolbova. “The music we initially chose proved to be a wrong one for the Olympics. It wouldn’t have worked as an Olympic program, so we had to find something else really quickly. Then Nina Mozer suggested that we should try to do Carmen. We thought, well, why not. We were lucky that Pasquale Camerlengo and Anjelika Krylova immediately agreed to help us with it and that they such a good job.”

For Astakhova and Rogonov, the bronze in Moscow was the second one in a row. The students of Artur Dmitriev delivered a clean short program and their only mistake in the free skating was a double-footing landing of the throw triple loop. They improved their personals best in the long program (131.97) and overall (199.11) to pull up to the third place and complete the Russian sweep of the medals.

“Today we did well,” said Rogonov. “We did almost everything we planned to do, got almost all the levels and we did most of the elements well. Of course there is still room for improvement, there are still things to work on, like the speed of our skating. There are things which require refinement or some additions.”

“In general, I agree with Alexei,” added Astakhova. “We are happy overall. The only mistake was one of the throws that was two-footed and the rest was quite good.”

“Our long program is to La La Land,” said Rogonov about their routines. “We started to put this program together in April immediately after we saw the movie. Later, we learned that it won the Academy Awards, so it removed the last of our doubts: the music was not only good, it was a winning music.”

“We worked a lot on our long program, but changed the short program very late, in mid-summer,” he added. “We had two nights to choreograph it. We were afraid that we wouldn’t be able to do it, but we decided to risk it, and we like the result. We have several pieces in it: Mozart’s ‘Adagio for Strings’ and ‘Requiem’ and towards the end for the step sequence, we have ‘O Fortuna’, which is powerful, especially in this arrangement.”

Astakhova initially had some reservations regarding the long program. When choreographer Sergei Komolov shared the music, she was not convinced. Even after watching the movie as he requested.

“When we started to work on the program, things started to develop and it became interesting,” she said. “The choreography was interesting and Sergei’s approach to it was interesting, so we chose this music and in the end, it is a very good program and I love it.”

“We listened to the La La Land soundtrack a lot of times,” elaborated Rogonov. “We knew that we need a lyrical part in the middle and ‘City of Stars’ was not our first choice. We loved another tune more, but it did not fit quite well with two other upbeat pieces, so we had to chose ‘City of Stars.’ We did the arrangement together with our choreographer.”

Italy’s Valentina Marchei and Ondrej Hotarek, who stood third after the short program, slipped to the fourth place in overall standings (193.63) after Marchei fell on an underrotated triple toe loop in the beginning of the program.