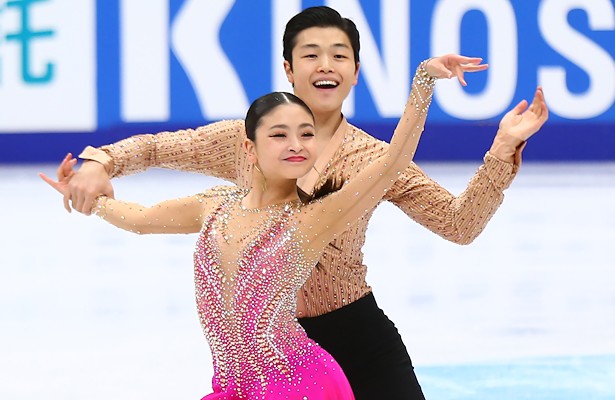 USA’s Maia and Alex Shibutani perform their Short Dance at the 2017 Rostelecom Cup.

For the students of Marina Zoueva, the competition in Moscow was the first one this year and the skaters were really anxious to show the results of their hard work over the summer.

Their short dance performance to “Mambo No. 5,” “Cherry Pink And Apple Blossom White” and “Mambo Jumbo” featured four level four elements. The choreography was excellent and the team showed an impressive series of synchronized twizzles—an element which is usually considered to be high risk for ice dancers, but which Maia and Alex managed to make their trademark thanks to the speed and unison of the execution.

“We’re so excited to be here and to begin our Grand Prix season, our Olympic season, here in Moscow,” said Alex about their short dance. “Our practices have been going great and we really enjoyed our performance.”

“We really love this program, the music is so dynamic and fun,” his sister, Maia, added. “The Latin rhythms I think will be really entertaining for the audience, and we really changed ourselves with our choreography this year.”

The free dance to Coldplay’s “Paradise” was equally successful with both the audience and the judges. This was very important for the U.S. Champions, who say that their music choice this year was inspired by their own story and fits into the greater context of their recent dances.

“It’s the third chapter of the trilogy that we created with our free dances,” explained Alex. “The first chapter was two years ago, the first time we competed with Coldplay’s ‘Fix You.’ The last year was the second chapter we called that ‘Evolution’. We did not talk about our idea of the trilogy last year, but we already that idea.”

The team is very proud of the program and the music they chose as they feel the lyrics really connect to them, reflecting on their career and the way they have felt for the past three seasons.

“The last two years, and this one is about being ourselves, we discovered who we are as performers, what we are trying to say on the ice,” Alex elaborated. “We are proud of the whole concept, the thought that went into it, and how we will continue to develop and build onto it so that it’s a really strong program in time for the Olympic Games.”

“The program is really about us, in way,” agreed Maia. “We had such a strong start to our senior career, but afterwards, we experienced certain challenges. We were able to come through those times because we believed in each other, because we really love to skate and we never gave up on ourselves and on our dream that we can work up to be the best possible version of ourselves.”

Alex again emphasized that the story is about their relationship as siblings and the bond they share, explaining that the lyrics “When she was just a girl she expected the world, but it flew away from her reach, so she ran away in her sleep and dreamed of paradise” represented Maia’s dream to go to the Olympics to compete as a single skater.

“It wasn’t my dream,” Alex confirmed, “but once we started to do ice dance together, it became a different dream—the one what we share— and that has been true through all the challenges what we faced in our career. Even though we had such a successful career and we are proud of everything we have accomplished, there were challenges after 2011, and it was our ability to look each other in the eye and believe in each other and know that we love what we are doing and we are doing it for the right reason.”

The two-time world bronze medalists are additionally inspired by meeting the band, who they had the opportunity to meet twice.

“The first time was following the year we skated to ‘Fix You’ and then we met with them again this September,” Maia shared. “So it was really exciting for us to be able to tell them that we are skating to their music for the Olympics, and then also just seeing them perform live. They have so much joy in their concerts, and I think that’s really something that inspired us. That happened about a month ago and it was really great motivation for us coming into this competition.”

“They have seen our ‘Fix You’ performance,” added Alex. “No one has seen this one before today, but we love the music. I know a lot of people around the world love Coldplay and the feeling that people get when they watch them perform and listen to their music. It is like Maia said, it’s a joy, it’s about love and power of your dreams, reaching for what you believe in and what you want. This is what this season is about for us and this is was the past two seasons were about for us too.”

The team received 189.24 points in total to win the event by a 4.5-point margin and they are fairly confident that reaching for their dreams will produce the desired results.

“I think that we have shown in the past year the ability to compete with all the teams and be competitive with everyone,” said Alex. “We are really confident in our own ability to perform when it really matters in competition, which is really important especially when there is a lot of pressure at the Olympics. We are just focusing on ourselves and we are confident in the direction we are going in, that it is the right direction. I think the results last year were a good indication of that too. The programs were really well received. We enjoy performing them so much and it gives us really a great base coming into Skate America.”

In contrast, for Bobrova and Soloviev, the Moscow stage of the Grand Prix series was already the third event of the season as the team also competed at Russian Cup (national level competition) and an ISU Challenger event O. Nepela Memorial (first place).

The students of Alexander Zhulin delivered a very strong short dance for which they received a new personal best of 76.33 points. They were also skating very well in the free dance before Bobrova suddenly slipped off the edge during the spin in the middle of the program. The element was downgraded to level 2 and received negative GOEs (Grades of Execution), leaving them with only 184.74 points in total.

“First of all, I would like to thank everyone, the organizers, all the fans who created this festive atmosphere here,” said Soloviev. “I think it was up to the level of world championships. It was very easy for us to skate here. We felt very free and relaxed and even in practices, we felt support of the fans. Many of them came here to root for Yuzuru, but they stayed for other events as well. They attended all the practices and they are extremely dedicated to figure skating. We are grateful to all of them and the Russian fans as well.”

“We messed up the spin in the free dance,” he acknowledged, “and we are really upset about it, because in practice we skate clean. Sometimes we do two run-throughs clean, and then suddenly we make this stupid mistake. I think it affected the overall impression from the program, and it is a pity. Maybe had we made a lot of mistakes in practice, we would have gotten used to it, but this mistake took us by surprise.”

“It’s already the third competition of the season for us,” added Bobrova. “At previous events, we had issues with the short dance. Today, we had an issue with the free dance, so logically the next step is to skate both programs well.”

According to the six-time Russian Champions, they faced no difficulties in creating new programs for the Olympic season.

“The short dance was quite easy,” said Soloviev. “Everyone has the same theme, Latin Dances, so all that was left for us was to find music we liked and we can skate to.”

“As for free dance,” he continued. “All of us, our entire team, loved ‘Oblivion’ tango, which is the first part of our dance. It’s intense and it has a lot of emotions in it and we believe it’s not just a tango, that you can tell any deep story using it. So we had to find the idea for the dance and another piece of music for the second part of the program which would serve as its development and culmination.”

“The idea is that Katya is blind and she run into me in a crowd,” he explained. “I am surprised because I cannot understand what happened, why she had not seen me. So it’s the start of the story. We become interested in one another, the relationship begins to develop… it is a very uncommon thing. It forces us to learn about each other, to help each other, to discover something new.”

“In the second part, love creates miracles and I re-gain my eyesight,” continues Bobrova. “We are happy together. Dima shows me the world of which he only told me about before and now he is able to show it more and I enjoy it a lot. In the end, there are actually two possible endings to the story. The initial one was that in the end it turns out that it was just a dream, that I never existed and Dima simply dreamed me up. But after the first performances, people told us that we have a very interesting ending with Dima going blind at the end of the dance, and we decided that it’s quite a good version as well.”

Stepanova and Bukin finished third in both parts of the competition to win the bronze with 179.35 points in total. The students of Alexander Svinin and Irina Zhuk received good levels on all their elements and were very proud of this accomplishment.

“We are very happy that we managed to fixed the mistakes we did at Finlandia Trophy,” said Stepanova. “We made some changes to steps and entries, made some things more comfortable. We are very proud that our coaches greeted us with smiles and that they were very happy with our performance. It is the greatest reward for us at the moment.”