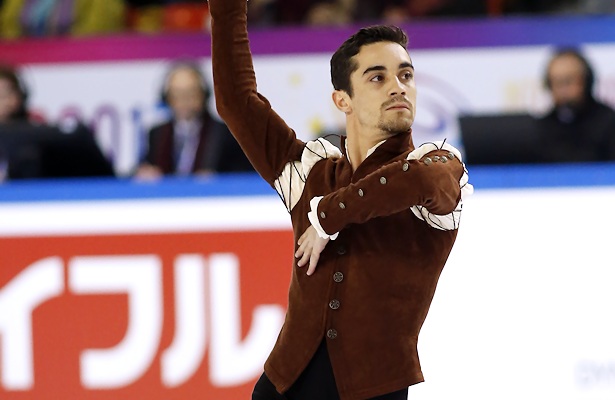 Javier Fernandez of Spain redeemed himself with a win at the 2017 Internationaux de France de Patinage after placing sixth two weeks ago at Cup of China. Shoma Uno settled for silver, while Uzbekistan’s Misha Ge came from sixth to claim a surprise bronze.

Fernandez earned a season’s best 107.86 with his “Modern Times” short program in which all jumps were solid: quad toe-triple toe, quad Salchow, and triple Axel. The Spaniard also showed good spins and footwork.

“I thought I skated great!” said Fernandez. “After coming from my first grand prix (Cup of China, 6th), I think I had a good skate. It was good for me and good for everybody to be able to skate a good performance.”

“Sometimes it’s hard to compete good every time when you’ve been skating for so long,” added the 26-year-old. “Everybody’s expecting you to skate amazing and not every time you can skate your best. Still, we try every single time.”

“After coming from my first grand prix, I think I needed to have a good skate and be able to smile and be happy,” Fernandez added. “Sometimes it’s hard with all the work, pressure, and when you get really nervous. So, it is good to have that feeling back. I’m glad I was able to do a great short program.”

In his long program to “Man of La Mancha,” the two-time world champion landed a solid quad toe followed by a quad Salchow-double toe, but then struggled with the rest of his jumps (except for a triple Lutz), falling on a solo quad Salchow and triple Axel. He otherwise showed good spins and footwork, and scored 175.85 for a second-place finish in the long and first overall with a total score of 283.71.

“It was not quite the best free Program, more than one big mistake, but I think it was still a better Grand Prix than my last one, which is an improvement,” Fernandez said. “Still, there is a bigger improvement to do. We’re going to go back to training, we’re going to work harder and try to do a better free program in the upcoming competitions.

“It was a long day for me, at least for me,” added the five-time European champion. “We trained early, then we had to wait many hours until the night. I think I started the program pretty well. I think after the first Axel, I hurt my hip a little bit. It’s not a major thing, of course, but you think about it. When the program starts to go down, you start getting more tired, and when you get tired, you make more mistakes.”

Chances are slim that the Spaniard will qualify for the Grand Prix Final, and he knew this going into this competition. “I think it was a positive thing that I was still able to come back from China and be able to perform better programs and know that I can do even better.”

“Anything is possible in figure skating,” said Fernandez. “We saw Evan Lysacek win the Olympics without a quad. Anything can happen. It depends on every skater, how they skate. If it’s a good performance, and it’s the best performance of the night, it doesn’t matter how many quads you might do. A perfect skater is a skater that skates the best, jumps the best, do the best transitions, the best skating skills, everything. That person is supposed to be the Olympic champion, the world champion, everything. It’s not all about only one thing. It’s about everything that creates the complete skater.”

Uno underrotated and fell on his opening quad flip in his “Winter” routine from Four Seasons, finishing second in the short with 93.92 points.

“It was a very hard short program for me,” said the 2017 World silver medalist. “It was very difficult. I was concentrating on my jumps because it was so hard rather than the performance itself, but I was really happy to see my components were all nines.”

“It felt very short,” he added. “I was deeply drawn into this program and if felt like it was finished before I knew it.”

Uno had four quads planned for his jam-packed long program to “Turandot.” The 2017 Four Continents bronze medalist landed his opening quad loop and triple Axel, but then underrotated and two-footed the landing of a quad flip. While his spins and footwork were solid, the skater also fell on a quad toe and later on a triple Axel-triple flip combination. He managed to score 179.40 for a first-place finish in the long, however, a total score of 273.32 was not enough to overcome Fernandez.

“It was really tough for me, but compared to the short program, I felt better,” said the 19-year-old. “I guess I can motivate myself and practice more and more for the upcoming competitions. Since it (the Final) is in my home town, a lot of people are expecting a lot from me, but my main goal is to do my own skating.”

“We all have our own talents,” said Uno regarding what is considered a “perfect” skater. “The young skaters, the old skaters, and everybody is unique in their own way. A younger skater might be able to do something that an older skater can’t, and there’s some stuff that we can do better than they do. It’s good that we all do the best we can. It’s really important that we look as skating as an all-around sport, not only one particular thing.”

Unarmed with no quads, Ge slipped past the rest of the error-ridden field to grab the bronze. The skater gave a near-flawless performance to “Meditation (from “Thais”),” landing a total of eight triple jumps and displaying strong level four footwork. He scored a new personal best of 172.93 for third place in the long and overall (258.34).

“The few weeks after the Cup of Russia (Rostelecom Cup) were tough through training and documents. I guess most people know that I got my visa (for France) just a few hours before my flight,” Ge said. “I am glad that through all those difficulties we were able to pull out two good skates and personal bests and were able improve in many small aspects.”

Ge has announced that he will retire after this season. “Really, at my last Grand Prix to get a medal is unbelievable. We got an Olympic spot for 2018 for Uzbekistan to help the skating and those kids to push them forward to do the sport.”

Alexander Samarin skated to a personal best (91.51) in the short despite a fall on a quad in his “Moonlight Sonata” routine.

“I’m satisfied with my performance,” said the 19-year-old, “but I understand that I can do better than that. I’m happy that I established a new personal best score.”

“The music we picked together with my coach (Svetlana Sokolovskaia),” shared Samarin. “There were actually a lot of choices, but classical is what we both decided to go with. I really liked that music because I feel it calms me down and at the same time it gives me power in my performance.”

“At the world level, the men’s figure skating has progressed fast and we’ve been trying to catch up,” said Samarin in regards to the Russian field. “I think it’s starting to happen, and as for the girls, I’m really happy for them.”

In the long, however, Samarin faltered, falling on a quad toe and making small, but costly mistakes in several other jumps. He scored 161.62 for fourth place in the long and overall (253.13).