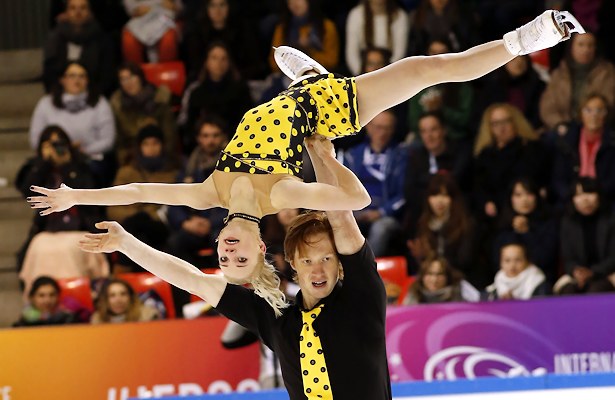 Tarasova and Morozov gave a strong short to “Piano Concerto No. 2” by Sergei Rachmaninov which featured a solid level four triple twist, throw triple loop, and side-by-side triple toes. They finished first with 77.84.

“Not the best performance I think,” said Morozov. “We did some little mistakes in the last element (step sequence), but overall we are happy to see our progress and to be on the right way in this important season.”

The 2017 World bronze medalists placed second in the long (140.36) after they struggled on their side-by-side combination jump and two footed the landing of a throw triple loop in their upbeat routine to “Candyman” and “Naughty Naughty Boy.” The team otherwise showed a huge quad twist and solid throw triple Salchow, as well as strong spins and lifts. With a total score of 218.20, they were able to maintain first overall to win the gold by just over four points.

“It was not our best performance,” admitted Morozov. “We made one-and-a-half mistakes. We lost concentration for the second jump and missed it. Overall, I think this program was better and we’ll keep in mind what we need to do better.”

With two grand prix victories, the 2017 European champions have qualified for the Grand Prix Final.

James and Cipres were solid in their soulful routine to “Make It Rain,” landing a throw triple Lutz and side-by-side triple Salchows for second place (73.18).

“We are pretty happy with our performance,” said James. ” We made a little mistake on the [Lutz] and have to overcome that and pay more attention. I think that’s our weakness lately. Other than that, we’re very proud of our short program performance”

Apart from a two-footed landing on a throw quad Salchow, the 2017 European bronze medalists were solid in their moving routine to “Say Something.” Their program featured solid side-by-side jumps, as a well as a throw triple Lutz, and they placed first in the long with 141.14 and second overall (214.32).

“It was amazing to skate at home,” Cipres said. “It was not easy because they pushed a lot before we skated, and we were nervous. Again, we missed some points on the levels, but we will work on this.”

Della Monica and Guarise scored a season’s best (66.66) for third place in their short to “Magnificat,” which featured good side-by-side triple Salchows and a throw triple loop.

“We’re really happy with our performance,” said Della Monica. “I think so far it’s the best we’ve done this season, but still is not the perfect program that we can do. We skated relaxed and we did what we do at home in practice.”

The Italian champions were strong in their free skate to “Tree of Life Suite,” which featured solid side-by-side triple Salchows, level four lifts, and strong spins. The only major flaw was a fall on the side-by-side combination jump.

“It was a hard competition,” confessed Guarise. “I felt the tension in the long program. My legs were shaking from the beginning, but we finished with a smile. This is our first medal in the Grand Prix and we need to be happy with that.”