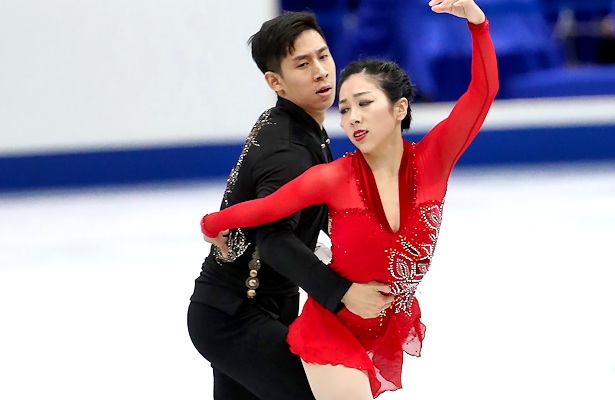 Sui Wenjing and Han Cong picked up their second ISU Grand Prix gold medal in a one-week span, winning the 2017 NHK Trophy on Saturday in Osaka. Just seven days after the Chinese pairs team claimed the title at Cup of China, they returned to the ice and broke the  record with a 155.10 free skate to earn a 234.54 combined score.

“The different feeling is more confidence,” Han said. “At the Cup of China, it was our first time to show the short and long programs in the international competition. This time we are feeling more enjoying of the audience, and I think this was very good for both the Cup of China and the NHK Trophy. We are feeling each other.”

The record long program eclipsed that of Tatiana Volosozhar and Maxim Trankov (154.66) at the 2013 Skate America, although the Russians still hold the mark for the top combined score (237.71). Han mentioned that in China there are many competitions on back to back weeks, so that was not a factor.

“I’m very happy about today’s performance,” Han said. “In the previous tournaments, we didn’t do that well. We have great support from the audience, and we could hear them cheering us, and we appreciate that. I don’t feel like we established a world record. Maybe later I will be able to understand the magnitude.”

“I was very relaxed and able to give my all,” he continued, “but we still need to drop some levels, so there is still room for improvement. If we had more time to work on it, we could do an even better performance. (Choreographer) Lori (Nichol) said this music is about the lovers’ lives. They bond and go through the passage of life together. We wanted to convey to the audience that in figure skating and life, people can continue to walk through that.”

Sui added that there are many Chinese elements in the music of Turandot they chose. “There’s beauty and strength about China we would like to stress.”

The two-time Chinese champions have not lost an international competition since they won silver at the 2016 World Championships behind Canadian pairs Meagan Duhamel and Eric Radford. Duhamel and Radford were also three-time defending champions at the NHK Trophy, while Sui and Han are the first Chinese pair to win the event since Pang Qing and Tong Jian in 2010. Sui and Han were the bronze medalists in 2013.

Ksenia Stolbova and Fedor Klimov of Russia won silver with a combined 222.74 points after their free skate to Carmen. The Olympic silver medalists executed a throw triple flip and triple Salchow, however, a few points were shaved off of the triple toe-triple toe combination due to a step-out on the second jump.

“Compared to our previous competitions, we did much better than before,” Klimov said. “We are happy about going to the Grand Prix Final. Last year I skipped the Grand Prix, so the fact I am back I am very happy. I will strictly control my schedule and make sure I am in top form.”

Teammates Kristina Astakhova and Alexei Rogonov took the bronze after their free skate to music from La La Land. Their long program was highlighted by a triple toeloop-double toeloop, a solid throw triple loop and trip flip, and combination level four lifts and spins.

“At the NHK Trophy, there is a high level of competition,” Rogonov acknowledged. “We need to travel a long way from Russia to here. That can be hard, and my partner Kristina is not feeling well because of that.”

Julianne Seguin and Charlie Bilodeau of Canada came in fourth, improving on a fifth-place showing at the Rostelecom Cup in October.

“After Russia, our main goal was to keep running the programs,” Bilodeau said. “Before Russia, we had some things that stopped us from training, so the main goal was to skate and skate and do run throughs, and that’s what we did.”

“Even if there were more mistakes here, we both feel more in shape,” he continued. “We’ll keep in that direction. In Russia, our long program was crashing everywhere, but now we’re where we want to be. In Russia, we did a nice short program, but the long was a bit shaky. So, to do a good long program here means a lot to us to know we can do both programs well in competition. At the beginning of the season, we had some injuries that kept us from good training.”

Seguin and Bilodeau orchestrated two group five lasso lifts and opened with a strong triple twist to the music “Where’s My Love.”

“I didn’t feel really great, but it’s happening so fast,” Seguin said. “We need to keep going. We missed a lot of points in Russia for levels and things, but now we’re more comfortable. If our program changes, I think we’ll get there. We worked hard on that program, and we have a great feeling out there. We’re going on the right path.”

USA’s Alexa Scimeca Knierim and Chris Knierim placed fifth with a combined 192.51 points. The team opened with a strong triple twist and throw triple Salchow in their routine to Ghost, but they struggled a bit on the side-by-side jumps.

“We have some obvious spots to improve on, but they are all attainable,” Alexa said. “I think the side by side spin needs to be trained more, not just in the program. The jumps are all about consistency, and we’ve hit kind of a road block with injuries. We’ll keep hammering away and that will be the key. We’ve trained around everything that hurts.”

The married pairs team commented that Chris continued working on the ice even while Alexa was sidelined with an injury at the end of last season. They also enjoy returning to the NHK Trophy, where they won the bronze medal at Nagano two years ago.

“The skaters can do their jobs because they are not distracted by anything else,” Alexa said of skating in Japan. “Our goal for this season is to be on the Olympic team. It makes it more special who gets that one spot, we’re all working hard for it.”

The Americans will compete in Skate America in two weeks and are the only pairs team from the NHK Trophy to enter either of the final two Grand Prix events (the other being the Internationaux de France).