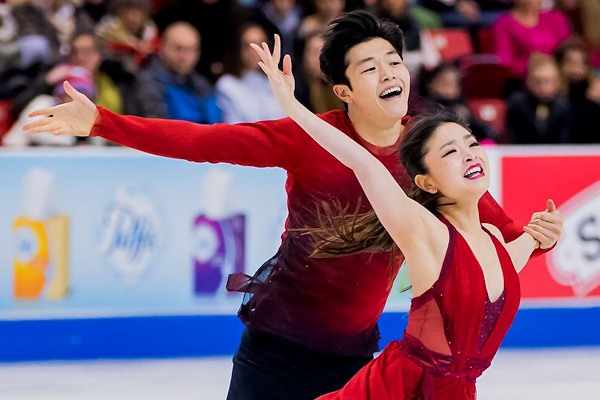 Shibutani/Shibutani and Cappellini/Lanotte have now secured a spot at the upcoming 2017-18 Grand Prix Final, and will be joined by Gabriella Papadakis/Guillaume Cizeron (FRA), Tessa Virtue/Scott Moir (CAN), Madison Chock/Evan Bates (USA), and Madison Hubbell/Zachary Donohue (USA).

Shibutani and Shibutani earned a new personal best (79.18) for their confident Mambo/Cha Cha/Samba short dance in which they met all three key points on their level four Rhumba pattern. The U.S. champions also earned a level four on their impressive twizzles, pattern steps, and rotational lift. Their routine also garnered no less than +2 Grades of Execution (GOE) for all elements.

“We were really happy with our performance today,” Maia Shibutani said. “The crowd was absolutely incredible for the whole event. We really felt we did a great job, embracing their energy and putting it into our performance.

Cappellini and Lanotte finished second (72.70) after their energetic Cha Cha and Samba which was highlighted by level four twizzles and a good rotational lift. The Italians left points on the table after only earning a level two on the pattern steps and not meeting any key points, however, they also garnered high GOEs.

“Luca and I are very pleased with our performance tonight,” Cappellini told the post-event press conference. “We felt it was a definite improvement from NHK [Trophy in Osaka]. We are not quite as pleased with our score. We lost a lot of technical points and we are not sure why yet.”

Sinitsina and Katsalapov showed solid level four twizzles and a rotation lift in their Samba/Rhumba routine, however, they too, only earned a level two on the pattern steps and did not meet any of the key points. The 2017 Russian bronze medalists finished third with 68.72 points.

“We are pleased with our performance,” Sinitsina said. “We’ve worked a lot since our Grand Prix in Japan and there is progress. We felt we performed much better here. We’ve worked on the technical side, on the choreography, basically on everything.”

Shibutani and Shibutani delivered a crowd-pleasing free dance to Coldplay’s “Paradise” for a first-place finish and season’s best of 115.07 to finish first overall (194.25). The 2017 World bronze medalists once again earned +2s and +3s GOEs for all their elements, including their trademark twizzles, garnering level fours on all elements except for the circular and diagonal steps (level three).

“We’re really proud of what we did this entire weekend,” said Maia Shibutani. “We’ve been working so hard since Cup of Russia and both programs really felt like they built and they’re so much stronger now heading into the Grand Prix Final. These were the performances that we were looking to have.”

Cappellini and Lanotte placed second in the free dance (108.93) after their captivating routine to La Vita e Bella which featured solid level four twizzles, however, their straight line lift and step sequences were graded a level three.  The 2017 NHK bronze medalists finished second overall with 181.63 points.

“We had the impression that we need to be perfect today and it always adds pressure to the whole process,” Cappellini said. “We were nervous. We missed the exit of the lift and we knew we already lost some points.”

“We are definitely looking forward to improving our technical score and we’re trying to do that,” she added, “especially for the second part of the season where all the major championships are going to take place.”

“We are very happy with how we skated here at Skate America, we skated clean,” Katsalapov told the post-event press conference. “Now we know what we need to work on. Our next competition is our national championship and we’ll try to fix everything that wasn’t perfect yet. It was a great pleasure to compete in this historical place and we felt really energized.”

Gilles and Poirier showed lots of character in their fierce and sultry “Perry Mason” free dance, placing fourth in the free dance (166.54) and overall (166.54).

USA’s Kaitlin Hawayek and Jean-Luc Baker moved up one spot to fifth overall (163.53), followed by Zagorski and Guerreiro (160.28).

“We’re really happy with the performance we put out,” said Baker. “The field here is extremely difficult. Everyone is up to par with each other between third and ninth place.”

“We’re both very happy with the consistency that we’ve shown throughout this season with the free dance,” said Hawayek. “It’s growing, and even though it wasn’t a personal best for us, we feel like every time we step on the ice with this program we grow it more and mature into it a little bit. We’re excited to see how the end of the season develops for it.”