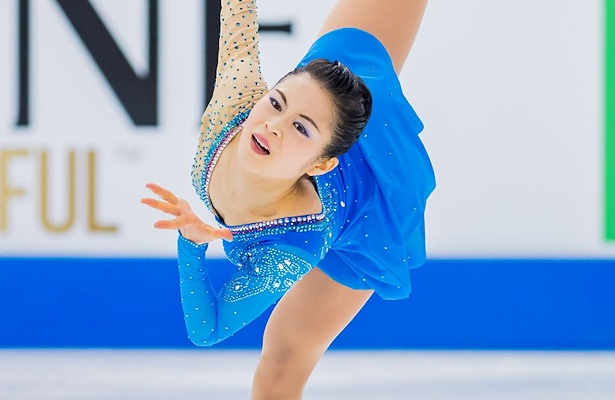 USA’s Ashley Wagner, who stood in sixth after the short, halted her free skate after a few jumping passes and withdrew from the event. The skater had been diagnosed with a right ankle infection just over a week ago.

“I had just gone on antibiotics and I did everything that I could to do like a quick fix, but it’s not a quick-fix kind of a situation,” she shared.

“I came into this event with an ankle infection and thought I could will myself through the pain,” said the three-time U.S. national champion, while fighting back tears. “My focus is on nationals. At the end of the day, that is my goal for the season. I’ve never withdrawn from an event. I didn’t even know where to go. I’m a competitor through and through. It’s really tough and it breaks my heart.”

Miyahara finished first in the short program with 70.72 points. The three-time Japanese champion turned out the landing of her last jump on a triple Lutz-triple toe, but otherwise landed a triple loop and double Axel. She also delivered solid level four spins and footwork in her graceful routine to Memoirs of a Geisha.

“I am very happy to get these points, but I am not really satisfied with today’s performance,” said the 19-year-old. “I still have a lot of things to do and I want to work on them more.”

Teammate Sakamoto opened her short to “Moonlight Sonata” with an exquisite level four layback spin and followed through with a solid triple flip-triple toe, triple loop, and double Axel. The only flaw was a bobble on her final combination spin. The 2017 Japanese junior national champion earned a new personal best of 69.40 points to finish a close second.

“Today I was not so nervous and I did a good job,” said the 17-year-old. “In Russia (at the Rostelecom Cup) I did a good short program, but the free skating was not good enough. This time, I want to do my best in the long program.” the 17-year-old said.

Canada’s Gabrielle Daleman showed promise when she opened her “Carmen” routine with a solid triple toe-triple toe, but stepped out and put a hand down on the landing of a triple Lutz. The 2015 Canadian champion otherwise delivered solid spins and footwork to earn 68.08 for third place.

“Today’s program is definitely a step up performance-wise,” the 2017 Four Continents silver medalist said. “I worked very hard on my performance side. The technical side, there is a lot of improvement to be done, so I’m ready to go home the day after tomorrow to work harder and be prepared for the next time.”

USA’s Bradie Tennell delivered a solid routine to “Taeguki,” which was highlighted by a triple Lutz-triple toe and level four spins to finish fourth with a personal best of 67.01.

“It feels pretty good,” said the 19-year-old regarding her debut performance on the Grand Prix. “I’m really happy with how that went. I don’t think I was really nervous, I was just really excited. I felt really prepared for this, so I just kind of treated it like another practice day.”

Wagner finished sixth (64.12) after underrotating the back half of a triple flip-triple toe as well as a triple loop.

“I think that basically having a week and a half cut out of my training, the technical stuff is absolutely there,” said the 2017 Skate Canada bronze medalist. “It’s just the leg work isn’t quite there with the program. But a pretty solid 64 for that kind of a program feels good, and the long program is really where I hit my stride, so I know how to keep it together for two solid programs. I’m going to build from here. I’m not too far behind and I know exactly what I need to do to get up to the top.”

USA’s Karen Chen took a hard fall on a triple loop and underrotated the back half of a triple Lutz-triple toe to come in ninth (59.53).

“I’m definitely very disappointed in myself,” said the U.S. champion. “I’ve been practicing the triple-triples really good in practice and I know it was definitely not my best tonight. I definitely got a little tense on the Lutz, and I felt myself stepping out, but I still went for the toe. It definitely was not what I’m capable of doing. As for the loop, it was kind of just a really silly mistake. I landed forward, and before I knew it, I was flat on my face.”

“I am very happy and satisfied with today’s performance and to get my best scores,” said the 2016 Four Continents champion. “After the injury, this is the first big step. The most important event, the Japanese nationals, are coming next month. I’ll keep working hard to be able to do my best.”

Sakamoto skated a smooth and elegant routine to Amélie which also featured seven clean triple jumps. The 2017 World Junior bronze medalist scored a whopping personal best of  141.19 for second in the long and overall (210.59).

“After I was not satisfied with the Russian Grand Prix, I practiced so hard for a few weeks and this second try (here) gives me confidence for the future,” Sakamoto said. “In the Short Program, I did a mistake on the spin and I have so much room to improve my performance – the jumps, the spins and the grade of execution.”

In her grand prix debut, Tennell put herself in the mix after delivering a solid and confident long program to “Cinderella,” which was featured seven triple jumps and level four spins. The 19-year-old earned a personal best of 137.09 for third place in the long and overall (204.10).

“It was exactly what I’ve been practicing,” said Tennell on her performance. “I was just really happy I was able to put it out there. I feel like I did my job.”

The teen went on to say that she felt prepared and went out knowing that in her mind she could do it.

“I think that showed,” she said. “My goal was to soak up as much of the experience as I could and really put it all out there. I think I accomplished that.”

Tsurskaya rose from eighth to fourth overall (195.56) after placing fourth in the long (132.36). The 2016 Russian Junior champion landed seven triples in her dramatic routine and showed good spins and footwork throughout.

Daleman, who stood in third after the short, struggled on the landing on a triple Lutz and triple Salchow, and popped a loop, The 19-year-old dropped to sixth (189.14) overall.