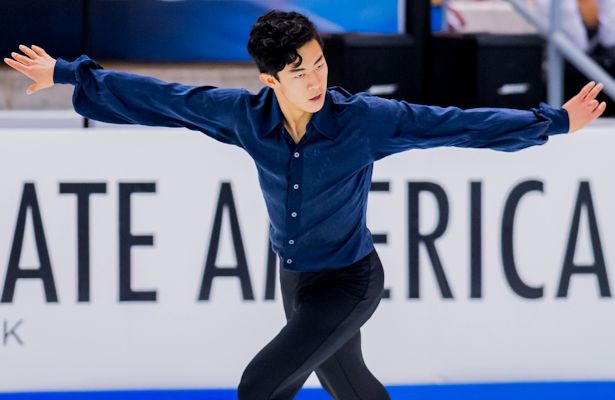 Israel’s Daniel Samohin withdrew from the competition after suffering a fall in the free skate which injured his shoulder.

The top four men earned a spot at the upcoming Grand Prix Final and will join Shoma Uno (JPN) and Mikhail Kolyada (RUS) in Nagoya, Japan, next month.

Nathan Chen wowed the audience with two solid quads: a quad Lutz-triple toe combo and quad flip in his routine to “Nemesis.” The U.S. champion fought for the landing of his triple Axel, but showed good spins and footwork to earn a new personal best of 104.12 for first place.

“It’s a new program with a lot of new stuff on the table this year,” said Chen of his person best score. “There’s a lot of points that I could have gotten last year and I’m making sure I take care of them this year. The score is still not that close to some of the top men currently, but that’s something that I know is attainable and it’s something I’m going to work toward.”

Despite his first place finish, the 18-year-old recognized that he had a few mistakes that he needs to clean up for the future, but was overall happy with his performance.

“I need to make sure that I stay clean and make sure that little mistakes don’t happen like they kind of did today,” he said, regarding going into the free skate. “I’m feeling good and I’m very excited for the long.”

Teammate Adam Rippon also earned a new personal best (89.04) and a standing ovation for his energetic program which featured a triple flip-triple toe, triple Lutz and triple Axel. His routine to “Let Me Think About It” was highlighted by level four spins and footwork throughout.

“It was a lot of fun!” said the 2017 NHK Trophy silver medalist. “And you know what? If you’re 28 and you’re still skating and you’re not having fun, girl, get out of Lake Placid. I had a lot of fun, and that’s why I still train and I still compete and I still love being out here.”

The former U.S. champion admitted that it’s been tough coming back since his injury last season which forced him out of nationals, but that it’s the best thing that has ever happened to him.

Sergei Voronov struggled with a the landing of his triple Lutz, but otherwise executed a solid quad toe-triple toe and triple Axel for a third-place finish (87.51).

The 30-year-old was pleased with his performance as he was able to deal with his nerves.

“It was a little new for me to skate first (in the group) in the Short Program,” said the two-time Russian champion. “The whole season I skated towards the end. There were some issues in my performance. Now, I need to focus for tomorrow.”

Han Yan fell on his quad toe, but landed a triple Axel and triple Lutz-triple toe to finish in close fourth to finish with a season’s best of 85.97.

Overnight leader Chen was off to a good start in his long, landing a solid quad Lutz-triple toe, but then struggled with several jumps throughout the program, falling on a quad flip and quad toe, and doubling or popping others. The 2017 Four Continents gold medalist was clearly disappointed with his routine which earned 171.76 points for second-place finish. The short program saved him, however, and he was able to maintain first overall with over nine points to spare (275.88).

The skater was very disappointed with his performance, but was relieved that he was able to qualify for a spot on the Final, acknowledging that he had problems he needed to address.

“That was pretty rough, I’m not going to lie,” said the 2017 Four Continents champion. “I came in here with a lot more expectations in terms of what I was going to do. Obviously I wanted to hit the quads. I used a lot of energy on that first Lutz, and it was a little off in the six-minute warm up. I think I exerted too much energy there, and then it took me a little bit to recalculate. I didn’t calculate properly, so the rest of the program kind of went downhill from there. It’s a good experience. It’s a good thing to learn from and I’ll work hard for the next event.”

Prior to the long, the skater’s left blade was changed out due to a nick, which was actually there before the short program.

“I think that was actually a bad call,” said Chen. “It was a little bit too sharp on the inside edge, so every time I pressed into it for a Sal, for a toe, for a flip even, it would catch into the ice a little harder than I was used to. I think that was a good experience. I tried it. At Worlds I had an extra pair of boots, but I didn’t try it because I didn’t want to risk it. I tried the risk here and it didn’t work, so it’s good to learn from.”

Rippon seized the night with another standing ovation after his well-choreographed routine to “Arrival of the Birds” and “O,” finishing first in the long (177.41) and second overall (266.45). The 28-year-old fell on his opening quad Lutz which resulted in a dislocated shoulder, however, he popped it back in and continued to land a total of eight clean triple jumps, displaying intricate footwork and spins throughout.

“What I love about competing is I love performing,” said Rippon. “I just wanted to put on a good performance, so I put that (fall) behind me. I focused on what I needed to do to have a good skate, and then I just pushed myself from there.”

Voronov, who had to skate after Samohin fell and withdrew, didn’t disappoint in his “Sarabande Suite” routine which earned him third place in the long (169.98) and overall (257.49). Apart from a fall out on his triple Axel and a two-footed landing on a quad toe, the 2017 NHK Trophy gold medalist otherwise executed clean jumps and showed strong spins and footwork.

“It was not easy,” the 30-year-old said. “I noticed that something had happened, there was a delay and I only can wish Daniel Samohin a quick recovery. It was a distraction, but I was able to deal with the difficulties and I’m looking forward to the Grand Prix Final.”

Jin, who has been battling ankle problems, made small but costly errors on several of his jumps to place fourth in the long (168.06) and overall (246.03).

Teammate Yan, who stood in fourth after the short, finished seventh in the long and fifth overall (228.33).