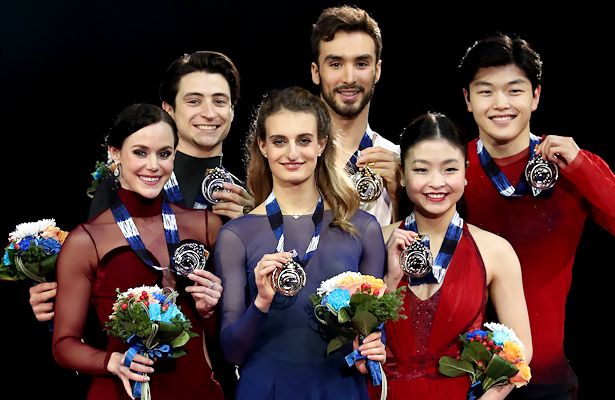 It came down to component scores in the battle for first place between the French and the Canadians.

Papadakis and Cizeron performed an enchanting free dance which featured level four twizzles and lifts, along with strong level three footwork. The two-time World Champions garnered mostly +3 grades of execution (GOE) for their elements in their free dance to “Moonlight Sonata.” The team earned was also awarded 24 perfect 10.00s, mostly for performance, composition, and interpretation, placing first in the free dance (120.09) and overall (202.16 points).

“We are happy to have won this competition,” said Papadakis. “It was a good practice for the Olympic Games that are coming up in few months. It was a very good performance and there was a lot of pressure here with the top six teams competing. We’re very happy that we were able to deal with this pressure.”

“This is also the first time for us to win the Grand Prix Final,” noted Cizeron, “so it is one more thing off our list. It was not perfect yet; there are still some things that we can improve in both programs, technically, and also to make it more consistent.”

“We are very happy that since the beginning of the season, we always delivered very good performances and we hope it is going to continue until the Olympics,” said Papadakis. “Skating is not a popular sport in France and we don’t live in France, but every time we go back, we feel that there is support, and we are very grateful for that.”

Virtue and Moir were solid in their performance, as well earning level four lifts, twizzles and spin. The 2014 Olympic silver medalists received 15 perfect 10.00s in the component scores for performance and interpretation to score a personal best of 118.33 points and a total of 199.86 points for second place overall.

“Tessa and I, we are proud about what we did this week and it was a lot of fun at this competition,” said Moir, adding that it was an honor to compete against and share ice with Papadakis and Cizeron. “Now it is important to be ready for the Olympic Games and we are pretty motivated. It was a pretty intense competition. We made a couple of mistakes, but overall, we are pleased with our week and we are stepping to a good direction.”

“We are on track towards the Olympics,” agreed Virtue. “We had an extremely successful season so far that’s testament to the team of people around us with our on and off ice coaches. They have put a spectacular plan, in place and as athletes, it’s been rewarding to really follow that. We just have to continue taking care of the details, making little tweaks to make sure that the programs are at our best for February.”

“To be honest it was a funny program for us,” Moir volunteered. “We had a great feeling between the two of us, but we made a couple little uncharacteristic glitches that we don’t even make in training that often, but I guess that’s why we train. We still feel like we captured the moment. We had a lot of fun out there, we were able to move the program better than we were at both of the Grand Prixs. We don’t like not wining, but we believe on our training, so we will stick to the plan. These programs are pretty demanding. They are tough, but we are on the way to where we want to be.”

Shibutani and Shibutani, who sat in third place after the short dance, finished sixth (109.91) in the free dance and third overall (188.00). While the team produced level four lifts, the twizzles were not on par and the diagonal step sequence was graded a level two.

“Today was not the performance that we wanted to have unfortunately,” said Alex Shibutani. “We feel pretty good this week overall and there was a lot of stuff to make progress, but I just had issues on the twizzles this week, which is uncharacteristic. We know what we need to work on. I’m not too worried about it. You need to do your best every time and have a clean strong program. I wasn’t able to deliver what I know that we are capable of. It’s just disappointing right now.

“I think it’s completely understandable the way we feel, because we work very hard,” added Maia Shibutani. “As an athlete, you go out there and do your best. We train very hard and believe, and as Alex mentioned, we need to get back to work and move forward.”

Teammates Madison Hubbell and Zachary Donohue finished fourth in the free dance and overall (112.59 / 187.40). Their routine was highlighted by solid level four twizzles, as well as level four serpentine steps. The team earned a level four for all lifts except for the rotational lift (level three).

“We had a small mistake on the last rotational lift,” Hubbell pointed out. “We saved it the best we could. We just lost some footing on those quick rotations. It really throws you off, so thank god for our experience and our many, many run-throughs, we could save it. But the rest felt really great and it’s always a great response in Japan when you finish. No matter how you do, they give you so much love and support. We were really looking forward to competing here at the Grand Prix Final and it’s the first time that we’re competing with the same panel of judges against our American opponents, so it’s going to be really great to get the feedback from the panel here.”

“Our performance was 99.8% fantastic!” said Donohue. “The next thing for us is nationals and our only goal is to be national champion. So that is the only thing we are focused on right now. To go back and do everything we can to get our PCS in the high nine’s and make sure all the levels are set. We will go back and clean everything up, just give it that little magical finishing touch.”

USA’s Madison Chock and Evan Bates, who stood in fifth after the short dance, finished third in the free dance (112.79) and fifth overall (187.15). The team earned level fours for all elements except for the diagonal and circular steps in their routine to Lennon’s “Imagine,” and were awarded high GOEs.

“We’re really, really happy with our performance today!” said Bates. “It was certainly the best free dance that we’ve put on this season. We’ve been working hard to convey a lot of emotions in this program. The piece that we’re skating to, the message, we were trying to do something special and we are really relating to it seriously, so we were working very hard to put the right emotions in this program. I think that we still have that to improve like our technical score for both of the programs. We got used to quite tough competition in the U.S. Nationals. For us, it is very motivating to work really hard; it’s a good healthy competition for us.”

“We will just keep going with everything we want to keep putting out,” added Chock. “We want to show emotional performances, each one better than the last.”

Anna Cappellini and Luca Lanotte if Italy rounded out the team, coming in sixth overall (185.23).

“We extremely happy with the result today,” said Cappellini. “It was our season’s best. We skated the best we could. We made a step forward at this Grand Prix Final. I thought this was a good competition to do. Less to lose, and great preparation for the Olympics. We definitely want to keep improving for the points, and we will go home and will get prepared for the Olympics.”

“I gave everything into the skate today,” said Lanotte. “We are emotionally connected with Japan. The Japanese crowd is the best in the world. We also have a personal connection after touring with Fantasy on Ice.”