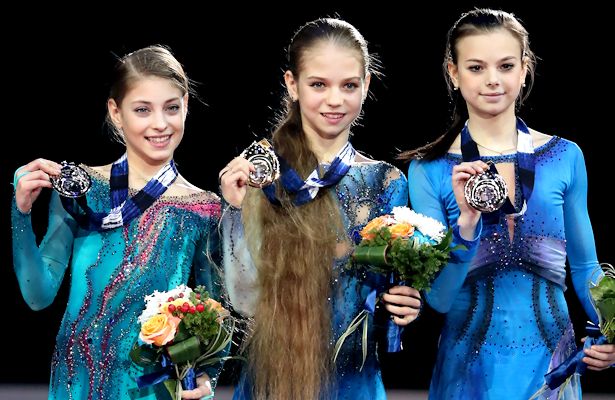 It was a Russian sweep in the Ladies’ event at the 2017-18 Junior Grand Prix Final of Figure Skating on Saturday. Alexandra Trusova, Alena Kostornaia, and Anastasia Tarakanova, all of whom train under Eteri Tutberidze and Sergei Dudakov, placed first through third, respectively. It was not a surprising result as five of the six ladies were from Russia.

All the Junior ladies impressed in Nagoya, Japan, skating perfect, or near-perfect long programs. There was only one fall in the entire segment of this event, and that came from an attempted quad Salchow. All but one skater had at least one triple-triple jump in their repertoire.

With the exception of Japan’s Rika Kihira and Russia’s Sofia Samodurova, it is the first international season for the youngsters.

Overnight leader Trusova finished second with a new personal best (132.36) in the free skate, but managed to edge out her teammates with a total score of 205.61. The 13-year-old underrotated and fell on an attempted quad Salchow, but this didn’t even seem to faze her. The 2017 JGP Australia champion recovered quickly to land a total of seven clean triple jumps and earned a level four on all spins and footwork in her routine to “Summer” from Four Seasons.

“Not everything worked out today,” said Trusova. “I am upset about missing the quad Salchow and I also made a little error on my combination, but I am happy that I was able to win the Junior Grand Prix Final.”

Due to her age, Trusova will not compete at the senior level at Russian nationals, so her next event is Junior nationals. “I’ll work on my jumps. I want to do the triple Axel and quad toe and I want to perfect the quad Salchow.”

Kostornaia skated a flawless and lyrical routine to “Stella’s Theme,” which featured a total of seven triple jumps. The 2017 JGP Poland champion also earned a level four on all of her spins and footwork, and in the end, placed first in the free skate with a new personal best of 132.93 and second overall (204.58).

“I am pleased with my performance today,” said the 14-year-old, “but actually, to be honest, it could be better. It means that I must work harder and that is what I am going to do after coming home. As for difficult elements in my program, of course, it is hard to train them, but when you do them on practices every day, more and more, it becomes easier. I know that the only rival for me is myself and I just must train a lot.”

Tarakanova showed lots of speed and energy in her routine to “Sarabande Suite (Aeternae),,” which featured seven clean triple jumps. The 2017 JGP Austria champion earned a new personal best of 131.74 for a third-place finish (131.74) in the free skate and overall (199.64).

“I am glad that I could calm down and skate clean both of my programs here,” said Tarakanova. “I was really nervous that I even didn’t feel my feet on the ice. The short program was clean, so I really wanted to show the clean free program too. But of course, I’m not going stop. I will work hard to be better and better with every start. I know that I must do my best to get high scores and I wanted so much to get more than 200.”

“I am pleased because it was my first so serious and responsible competition and my first Grand Prix Final,” added the JGP Croatia Cup bronze medalist. “In my mind, I always try to imagine that I compete with the strongest skaters in the world. When I show a bad performance, I get angry to myself because I understand that I didn’t work enough. I try to analyze what I missed and what I should work on.”

“When I have more team members with me in the competition, I go out to see the town and enjoy, but when I’m alone I don’t go out much,” said the 13-year-old, when asked what she thought about having five Russian Junior Ladies in the event. “It more enjoyable when there are other team members and I like to talk and relax before the competition.”

Kihira impressed with a triple Axel-triple toe right out of the gate in her routine to “La Strada,” but then singled an Axel and underrotated a triple flip.

“I really wanted to land two triple Axels today so, that must be the reason I was able to land at least one of it,” Kihira shared. “After landing the first triple Axel-triple toe, I felt more relieved than happy. When I popped the second triple Axel, I thought I could do the triple Lutz combination later while I was skating.”

Nevertheless, the 2017 Japanese junior champion earned level fours on all her spins and footwork, finishing fourth (125.63) in the free skate and overall (192.45)

“I feel really happy to be able to skate here in Grand Prix Final,” said the 15-year-old from Nishinomiya. “I felt happy during my performance. This was a very tense competition, so I really wanted to do a good performance. From today’s performance, I learned a lot. Nationals will be at the end of this month, so I want to do better.”

The 14-year-old was pleased with her performance as she did everything she had planned.

“Also, we changed my program a little and now I do two loops instead of two flips, and today I was trying to show these improvements,” revealed the JGP Latvia champion. “We changed my jumps because I had some problems with my edges in flip and we discussed it with my coaches that I will receive higher scores with loop than with flip.”

The teen went on to explain the story of her long program: “I play the girl who is sad because her partner didn’t come to the date with her. It rains and I dance among the autumn leaves. At the end, I do this move with my hair and lipstick to show that it’s impossible to stay the same after the rain. I really like this move because nobody did it before and it’s quite unusual. This story is idea of my coach, Eteri Tutberidze.”

Panenkova’s favorite skater is USA’s Nathan Chen: “I like his jumps, his way of skating, and as I want to learn the quad Lutz. It is really good to watch him jumping. I was really dreaming about meeting him. I commented on his picture in his Instagram and he even answered me. Yesterday he congratulated me to my birthday!”

Sofia Samodurova rounded out the group with a sixth-place finish (122.73 / 187.74). The 15-year-old landed six triple jumps, in her “Libertango” routine, but both Lutzes received an edge call.

“I’m very happy with my performance,” said the teen from Saint Petersburg. “And I am really happy that my coach (Alexei Mishin) told me that he was proud of me and my performance. This was the first time he said so. I was very moved. He told me that I’m doing fine in the past. I liked the music and program this season and I can’t think of better a program next year. It was same music that Plushenko had as I wanted to have more emotional music. This Junior Final is the biggest competition I have participated in so far and I focused myself of doing my best.”