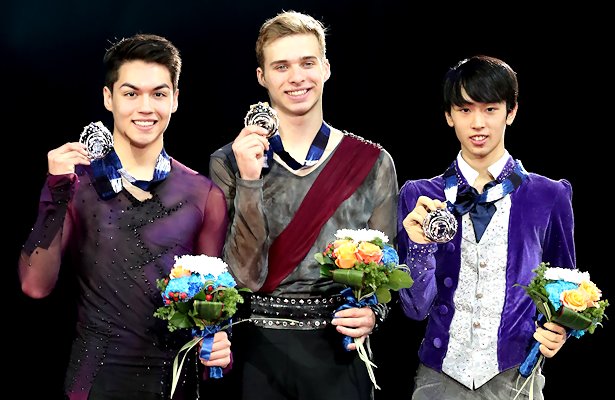 USA’s Alexei Krasnozhon took the gold medal with over 19 points to spare at the 2017-18 Junior Grand Prix Final on in the Men’s event on Friday. Teammate Camden Pulkinen pulled up from fifth to capture silver, while Japan’s Mitsuki Sumoto earned the bronze.

Krasnozhon, who stood in first after the short, underrotated his opening quad loop and later struggled on the landing of a double Axel, but was otherwise solid in his free skate to “Nelle tue mani.” His routine included eight solid triple jumps, as well as level four spins throughout, and the 2017 U.S. junior champion finished first in the free skate with a new personal best of 155.02 and overall (236.35).

The skater, who was fifth last year, felt more comfortable this time around in terms of what to expect and how to manage himself.

“It was pretty good, there is still a lot to improve going into Nationals, but I am happy today,” said the 17-year-old, who trains under Peter and Darlene Cain in Texas. “I was here to get the gold medal and I was able to take it. All I needed to do is to just get it done. I am proud of myself to not get distracted. I was very focused on doing my job. I was able to take one breath out, and just skate for myself, probably the first time in my career that I was able to let everything go and focus on one thing at a time.”

Pulkinen was nearly flawless in his routine to “12 Etudes, Op. 10-No.1 in C” by Chopin, earning a new personal best of 146.20 for second place in the long and rose from fifth to second overall (217.10). The skater from Colorado Springs, Colo., delivered seven triple jumps, including two triple Axels, and showed good footwork and spins throughout.

This is the first time around in Japan for the skater from Colorado Springs, Colo., who found the fans “amazing and supportive.”

“Honestly, I don’t really remember much what I did in the program, because I was so in the zone while I was performing, and I really wasn’t thinking,” said the 17-year-old. “I really let my body take over and trust my training. I feel amazing! My goal here was not really about placement, so I just wanted to deliver two good programs and improve on my seasons best, which I did. I’m really happy about that, so I have a lot to take from this competition.”

Sumoto fell on his opening triple Axel and later stepped out a triple Lutz at the end of his expressive “Les Misérables” routine. The 2017-18 Japanese junior champion was otherwise solid, but left points on the table with level two footwork and level three spins. He finished third in the long (137.35) and overall (214.45).

The skater from Osaka was disappointed about the mistakes, but felt good overall regarding his performance and the result.

“I am fairly consistent on the triple Lutz, but overall, I feel good about my performance and the result,” said the 16-year-old. “Actually, I was not calculating the points in my head, but when I saw ‘third’ on the screen for my free program, I thought, ‘I could make the podium this time.’ I was so excited when I found out that I am going to be on the podium.”

Russia’s Makar Ignatov fell on his opening quad toe and struggled in the latter half of his program to finish fourth with 136.21 points and overall (211.99).

“Well, the short program was not perfect, but quite good, except some tiny mistakes,” said Ignatov. “As for free skating, maybe my efforts were not enough to skate the program clean. On practices, I always did the quad without falling or other mistakes, and now it just happened. It’s quite difficult to make conclusions right now. We will analyze it later. Today, I am going to watch the seniors and will learn what I can take from their skating.”

“I was well prepared for this event,” said Erokhov. “It’s not a result of acclimatization or something else, everything was ok. I really don’t know what happened. Maybe I was too tight and it didn’t let me to do everything well. It doesn’t matter what the level of competition I participate in, I didn’t have such mistakes before in the Grand Prix series. Anyway, it’s an experience, too, that teaches me to be stronger and not to make such mistakes in the future.”

“I have been dealing with back pain from last month,” Torgashev explained. “It was getting a lot better, but after the fall on the Axel and toeloop, these weird falls, I just got into a lot of pain. I couldn’t focus on the jumps and wasn’t confident. Things happen in competition and before in training. This is just one of those things—it happens and get past it. And they say whatever that doesn’t kill you will you make stronger. Hope this will make me stronger.”