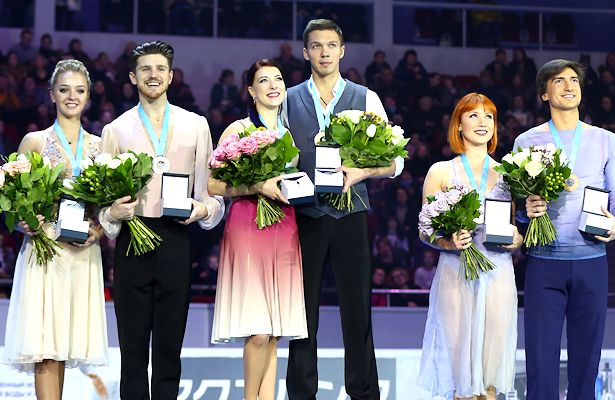 For Bobrova and Soloviev, this competition was not only a chance to re-establish their leaderships on the national level, but also a trip down memory lane. The team’s first breakthrough happened at exactly the same venue, “Yubileiniy” ice rink, back in 2010, when they won a silver medal at nationals, earning a spot on the 2010 Winter Olympic team. They have won gold at every national championships they have participated in since then.

“When I came here, I immediately recalled the last Russian National Championships in St. Petersburg, seven years ago on the eve of the Vancouver Olympics,” said Soloviev after the short dance. “I recalled in all minute details how nervous I was and how frightened Katya looked. Nowadays, it doesn’t happen anymore. We have learned to support each other, to ground each other simply by holding hands.”

If anything, the students of Alexander Zhulin have proven how crucial this ability is for success in sports. They not only won the event, they were also the only leading team to avoid any major mistakes.

“For the moment, we have done everything we could,” said Bobrova. “Of course, later, we will re-watch the videos and we will dissect the performance together with our coaches. There are still things to work on before the important competitions, but I believe that national championships is an excellent starting point.”

In theory, the skaters should have been rather confident in their success and their place on the national team, but at the end of the performance, seeing the public rise to their feet to give them a standing ovation, brought them to tears. Their usually steadfast coach was similarly affected.

“Today the audience gave us a standing ovation,” said Bobrova. “Then I turned around and saw that Alexander was crying and I broke down in tears again.”

“Zhulin is a very business-like person,” added Soloviev. “He never expresses any strong emotions in trainings. For him to cry out of happiness for us, it’s the greatest compliment we could have received.”

Stepanova and Bukin started the competition strong by delivering a clean and energetic Latin short dance (76.97), but Stepanova made a mistake on a twizzle in the their romantic free dance to “Liebestraum.”

“I think we delivered one hundred percent in the short dance,” said Stepanova. “We were so happy about it, but I made a mistake in the free. I think it is a good experience for us. We need to learn how many points we lost because of the mistake, but I think it should be easy to fix, and everything will be OK.”

“Yes, we made mistakes,” agreed Bukin, “but there is certain advantages to that as well. We learned about our weakest points and I think it will only make us stronger in the future.”

“We never thought about the possibility of winning the event,” he added. “We simply wanted to showcase our improvement since the last competition.”

“The upcoming Olympics inspire us, but we do not think about earning a place on the team,” the 24-year-old said. “Our task is to work hard, to train, and to please the audience like we did today. Today we were supported by a lot of our friends and family, and it was a pleasure to skate for them.”

Zahorski and Guerreiro unexpectedly claimed the third spot in the short dance, receiving the highest base value due to hitting all key points in the pattern dance section and becoming the only team to receive level four for this element (71.52).

The couple was not quite as smooth in the free dance: Zahorski stepped out of a twizzle in the step sequence and their final rotational lift only received a level three.

“Unfortunately, the free dance was not quite as good as we wanted it to be,” said Zahorski afterwards. “There were some rough spots. Today, we’re under additional pressure because we knew that we could have a chance to win a medal.”

The team had to overcome another obstacle as well: Victoria Sinitsina and Nikita Katsalapov, who skated right before them, withdrew from the competition halfway through their free dance.

“It has been a shock for us,” said Guerreiro. “First of all, because they are our friends and teammates, but also because we did not understand how much time we had before the start of our performance. We tried to avoid thinking about it, because one simply has do one’s job in any circumstances.”

“We hope that Vika and Nikita are going to be alright,” added Zahorski.

The team claims that they were not thinking about medals coming into the event.

“Our coach set certain goals for us, but we never thought about the placements,” said Guerreiro. “We have been making adjustments to our program all the way through the season and we wanted to show our maximum at every competition.”

“At the previous Russian Nationals, we always finished fifth,” added Zahorski. “Of course, I thought that it would be great to place higher, but we did not truly expect it, and now we have finished third!”

For Sinitsina and Katsalapov, the competition in St. Petersburg was the one they would rather forget. The team, who started working with Alexander Zhulin this year, was off to a shaky start in the short dance when Sinitsina stepped out of a twizzle and the element was downgraded to level one. Despite the good quality of other elements and great delivery of the dance overall, the mistake put them three points behind Zahorski and Guerreiro after the first day of the competition (68.46).

“Overall, we had excellent feeling about our performance,” said Katsalapov after the short dance. “I think our expression was great and we were fully committed to the dance all the way through. Unfortunately, we made a mistake on the element that we never miss in practices. We have been skating clean in the short dances all season. It’s a pity and now we will have to try even harder tomorrow.”

“We have been training well since Skate America,” he added. “Of course, we are a little bit nervous and excited, because Russian Nationals is a special competition. You are skating at home, in front of your home crowd… Maybe Vika thought too much about it and that’s why she made the mistake.”

“It’s 100% my fault,” added Sinitsina. “Now I have to forget about it and start from the clean slate tomorrow.”

Unfortunately, the start of the free dance wasn’t flawless either: Sinitsina brushed the ice with her feet during a change of pose in the opening stationary lift and the couple ran into trouble with getting into position for the straightline lift, which has Katsalapov gliding on one knee across the ice. The team was unable to execute their next move, a combination spin, and after a short conversation with the referee, they announced their withdrawal due to injury.

“Nikita got injured during the warm up before the free dance,” explained Zhulin. “It all happened very fast. We do not know what the nature and severity of the injury is, so we do not know how long it will take him to recover.”

Later in the dance, the Russian Figure Skating Federation website announced that preliminary medical examination revealed that Katsalapov tore a ligament in his right ankle.

Betina Popova and Sergey Mozgov, who competed at their first national championships as a team, finished third in the free dance and fourth overall with 167.70 points in total.

The top three teams were named to the upcoming European Championships next month. The two teams that place the highest at Europeans will be named to the Olympic team.