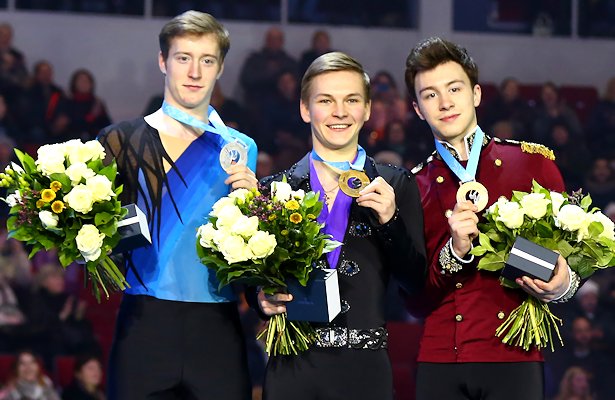 The first set of medals of the 2018 Russian National Figure Skating Championships were decided in the Men’s event. Defending champion Mikhail Kolyada pulled up from second place after the short program to score a convincing victory with 281.16 points in total, more than 20 points ahead of Alexander Samarin (258.53), who won the short. Another St. Petersburg’s skater, Dmitri Aliev, won the bronze (249.11).

Kolyada ran into problems with quad Lutz in both programs, but was able to land a strong quad toe loop-triple toe loop combination in his lyrical short program to Rachmaninov’s music, picking up 101.62 points for his efforts. He wasn’t quite as successful in the long where he fell out of the quad Salchow landing and popped a planned quad toe loop into a triple.

Despite the mistakes on the quads, his energetic and expressive free program to an Elvis Presley medley was one of the highlights of the evening, and the public loudly supported the student of Valentina Chebotareva throughout his routine.

“First of all I would like to thank the local public for support,” said the two-time national champion. “It’s always pleasure to skate at home. As for my performance, I made mistakes. I guess the best way to put it is to say that I am happy with the results, but not entirely satisfied with my performance.”

The skater, who won bronze at the ISU Grand Prix Final earlier this month, was not sure how to explain the reason for his mistakes.

“I still do not fully understand what happened,” said the 22-year-old at the post-event press conference. “May be I was unable to fully recover from the Grand Prix Final. To compete at two major competitions in a row is a challenge, plus this time there were also long-distance flights. It’s hard. Psychologically, everything was fine. I was in good ‘fighting’ spirit. I think emotionally, the performance was very good. Jumps are just something to work on.”

Kolyada said that he started to work on quad Lutz because, “why not?”

“It’s a difficult jump,” he said. “Not only physically, but also mentally. You have to concentrate really hard on it. I started adding it to my programs last year, before the Grand Prix event in Japan. I think so many skaters are going for this jump now because the level for the men’s skating has increased so much over the last ten years and it keeps getting higher and higher. I don’t even know what will happen next. I am not sure anyone does, but all three of us here today did great because we all work on that jump!”

The 2017 European bronze medalist says that he does not plan to change anything in his programs before the upcoming European Championships in Moscow.

“I just have to work more,” he explained. “I don’t want to change anything, I simply have to be more consistent.”

However, the student of Svetlana Sokolovskaya was quick to dismiss the record score. “I don’t pay attention to the points,” he told the press after the short program. “The competition has just begun and my task here is to skate clean and show the progress that I have achieved.”

The progress was indeed a remarkable one: the skater who only started to add quad toe loops to his programs last year, managed to add a quad Lutz to his jumping arsenal over the summer. However, the 19-year-old was unable to deliver the planned content on Friday night and had to settle for the fourth place (155.42) in the long program.

Samarin took a hard fall on his opening quad Lutz and then popped the second planned quad Lutz and quad toe loop into doubles. He recovered to land a triple Axel, but was unable to execute some planned jump combinations. The advantage he had after the short program allowed him to win a silver.

“First of all I would like to apologise to the federation, to my coach and my entire team,” the 19-year-old said afterwards. “I am deeply ashamed of my performance. I promise you that I will work even harder and more diligently. I will do my best to ensure that no one will ever see me skating like that ever again. It’s not at all what I was working towards to.”

“I am at loss to explain what happened right now,” he added. “I think there is a reason, but I don’t want to talk about it now. Overall, everything was good coming into the event. I was in the good ‘fighting’ spirit, but something went wrong.”

For Samarin, the choice of the top jump to learn was an easy one.

“I chose to work on the quad Lutz, because the triple Lutz was an easy jump for me,” he explained. “I learned the triple very quickly and everyone was telling me that I should try a quad. So I did. I guess the story is the same for everyone: I started trying it, I fell a lot, but I kept going, and eventually it was good enough to put it into the programs.”

“It’s a shame I was unable to execute it today, but it’s a matter of time,” added the two-time national silver medalist. “I only started adding the quad Lutz into the programs this season. I need more time and more attempts to land it at competitions to get used to it. It will help me to be calmer when setting up for it within a program.”

Aliev, who had been handicapped by an injury in autumn, made consistency his priority for the national championships and his plan paid off. Three quad toe loops in two programs, combined with solid triple Axels, were enough to earn him second place in the long program and his first medal of the senior national championships, a bronze.

“Overall, I am both happy and sad,” said the student of Evgeniy Rukavitsin at the press conference. “I am happy that this day is over and that I earned a medal at the end of it, but I am unhappy about the performance.”

The two-time junior national champion admits that he ran out of steam in the second half of his long program and attributes his mistakes on the final jumping passes—triple flip and double Axel-triple toe loop combination—to being exhausted.

“It was always difficult for me to skate last,” said the skater, “but I am truly impressed by how the crowd supported me at the end of the program when I was almost dead on my feet. Especially during the final step sequence. It felt so great that I almost wished I ccould do another element just for them.”

“I think this competition was mentally hard for me,” added the 18-year-old. “All the other guys skated well at the senior Grand Prix events, but unfortunately I was not able to. This event is the qualification for the European Championships, but it was only the third major senior event for me. I didn’t not feel confident enough I guess. I had to push myself into a senior mindset. Physically, we did a lot in preparation for this competition. There were many changes and it was hard, but my team was always there for me. It was psychology that let me down today.”

The skater credits his choice of quad jump attempts to his experience of competing at the ISU Junior Grand Prix Final in Barcelona two season ago, alongside the strongest senior skaters.

“I was watching the practices and I was in awe how easy and good Hanyu’s quads were,” he said. “I think he did not do the Lutz back then, it was only Boyang Jin and Nathan Chen, but I came back to St. Petersburg with the thought that I want to do the same. I wanted to progress, to improve my skating.”

“It was quite fast, actually,” he added “I was able to land it on the second try or so. It was the same for all other quads that I have attempted: Lutz, flip, Salchow. The first time I thought I really want to try them, I landed them at the same practice session.”

“I took quad Lutz out of the program today, because I really wanted to skate clean,” he explained. “Unfortunately, it did not work, but I landed one at the morning practice. I think everyone is going for it because it has the highest base value, but also because when it is executed clean, especially in a competition, a skater feels really proud of it, like you are truly worth something. It’s really a cool jump.”

He plans to add it back to his programs in time for the European Championships.

Sergei Voronov, who has been enjoying great success on the Grand Prix circuit this autumn, was unable to secure a spot at the national podium. The student of Inna Goncharenko was fourth in the short program despite delivering a solid performance with a quad toe loop-double toe loop combination, triple Axel and triple Lutz (90.23).

His performance in the long was ranked third among all the skaters (155.65), but it was not a performance to be proud of. The 30-year-old did not land any clean quads and managed to land only three clean triples (Lutz, Axel and loop), which was not enough for him to pull up in the rankings.

Artur Dmitriev, who trains in Moscow under the guidance of the 2004 European Champion Ilya Klimkin, went for a quad flip in both of his programs, but both attempts ended in falls and were downgraded by the technical panel. Despite the mistakes, the 25-year-old finished fifth with 238.51 points.

Vladimir Samoilov opened his performance to Julio Eglesias’ “Caruso” with an impressive and effortless quad Salchow, but was not able to keep the momentum going and popped the second attempt to land this jump into a double and fell on his third improvised attempt to execute in the second half of the program.

The skater, who represents the newly established school headed by Evegniy Plushenko and was accompanied to the event by the 1997 European bronze medalist Yulia Lavernchuk, finished sixth with 231.20 points, which represents serious improvement over his last year 17th-place finish with 160.42 points.

Andrei Lazukin, who sat in fifth place after the short program, struggled with difficult jumps in the beginning of his long program set to “Waltz Masquarade” and dropped to seventh place in the overall standing (230.94). The student of Alexei Mishin announced that he was going for the quad loop in his long program in his planned content, but did not actually attempt the jump in competition.

Maxim Kovtun, who had been struggling with back and knee injuries early in the season, withdrew from the competition after a disappointing 16th place in the short program (64.72). The former national champion landed a quad salchow and double toe loop combination in the opening of his Flamenco routine, but popped a planned quad toe loop into double and fell on a triple Axel.

“It is novel experience for me,” said the student of Inna Goncharenko after the short program. “It’s the first time in my career that I was physically unable to train, simply because I could not bend down to tie my laces and then straighten up again.”

“Right now, that I am standing still in front of you, nothing aches,” he added, “but the pains, in plural, are exacerbated by stress, adrenaline and workload.”

The top three men were named to the upcoming European Championships next month. The two men that place the highest at Europeans will be named to the Olympic team.