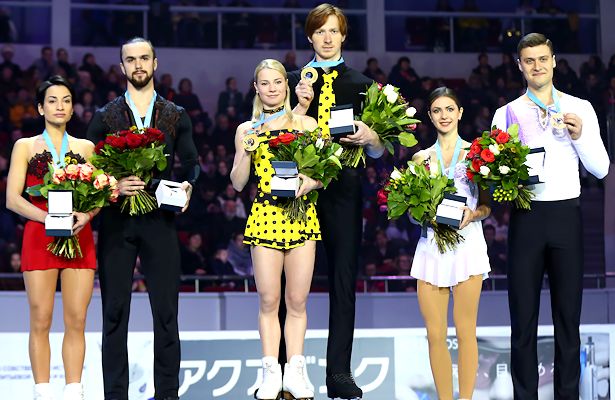 The 2018 Russian National Figure Skating Championships continued on Saturday with the Pairs and Ladies finals. Evgenia Tarasova and Vladimir Morozov rose up from second place in the short program to win their first national title (223.34), while Ksenia Stolbova and Fedor Klimov slipped to second place (215.55). Natalia Zabiiako and Alexander Enbert won the bronze (207.51).

Tarasova and Morozov made only two mistakes in two programs: Tarasova fell on the triple toe loop in the short program and performed a double Salchow instead of a triple in the long. The rest of the elements, including an impressive level three quad twist, were spot on.

The skaters appeared to be relieved at the post-event press conference.

“Our victory today is a breath of fresh air after the ISU Grand Prix Final in Nagoya,” said Morozov. “Today, our performance was much better than in the short program. We only had one small mistake, which is good given the circumstances. To compete in two events in a row takes a lot of effort.”

“I think overall,our performance here was much better than at the Rostelecom Cup in Moscow,” he continued. “Some elements might have been better at the Rostelecom, but overall, we skate the program much better now. We have learned how to play out our characters. It became easier for us to skate the program with all the emotions and at full speed throughout. We no longer run out of steam towards the end. It gives us pleasure to skate it now, and today, the public supported us so well that we felt that energy. We felt that we were skating this program together with them.”

“The long program was good today despite my mistake,” agreed Tarasova. “I was able to pull myself together after the mistake and we did the rest of the elements well. We are happy that we were able to fight through and deliver the program.”

The 2017 World bronze medalists are looking forward to a New Year break before starting the preparations for the upcoming 2018 European Championships in Moscow.

“We do not think about the fact that we are going to be the highest ranked Russian team at the European Championships,” said Morozov. “What is important is that we have three weeks to prepare well for this competition. If we manage to get in good shape and skate clean, there is no reason to worry about rivals.”

Stolbova and Klimov continued to struggle with consistency. The 2014 Olympic silver medalists missed the triple toe loop in the short program, and both triple jumps and the final throw triple Salchow in the long.

“We are definitely unhappy with the performance,” said Klimov at the press conference. “We made mistakes. I am not sure what was the reason. Yes, we are somewhat tired after the ISU Grand Prix Final in Japan, but not too tired.”

“We are really upset about the jumps,” he added. “It’s not the first time that we made this mistake this season. Many other things were good, but the jumps are worth a lot of points and we missed them. I guess it’s a mixture of loss of focus, bad luck and nervousness. It’s definitely not a technical issue, because in practices, everything is fine. Maybe we simply wanted too much to skate clean at Russian Nationals. We were not thinking about medals, but we definitely wanted to skate clean.”

“It is very important for us that we are skating at this venue,” added Stolbova. “Twenty years ago, I started my career here at the training venue. This is my home and I feel very good about it.”

Despite the mistakes, the team believes that they are on the right track for the Olympics.

“Our coach is telling us that we are moving in the right direction,” said Klimov.

Zabiiako and Enbert delivered a clean and smooth short program, but missed the triple Salchow and throw triple loop in the long. Despite the mistakes, the students of Nina Mozer won the bronze and came one step closer to fulfilling their Olympic dream.

“We made two major mistakes today,” acknowledged Zabiiako. “They were completely unexpected. The set up for the elements was good, but somehow they ended up in falls.”

“All other elements were good,” she added. “The twist was really good and we skated well overall. I guess we simply wanted to show our best too much.”

The skaters, who were a close third after the short program (1.32 points behind the leaders), said that they were not affected by the thoughts of medals.

“It was very interesting for us to compete in the top group,” said Enbert. “To challenge Astakhova/Rogonov, Stolbova/Klimov and Tarasova/Morozov. Our entire group was very strong and it would have been difficult to defeat anyone. But difficult does not mean impossible. This is something we are working towards.”

Enbert, who also started skating in St. Petersburg before moving to Moscow, added that he had a lot of good memories of the “Yubileiniy” ice rink.

“All most important competitions in my life took place at this venue,” said the 28-year-old.

Kristina Astakhova and Alexei Rogonov, who had been enjoying good performances on the Grand Prix circuit, were unable to challenge the top three teams for a place on the podium. The students of Artur Dmitriev missed a throw triple flip in the short program and both side by side jumping passes in the long to finish a distant fourth with 198.41 points.

“Our goal for the nationals was to skate clean,” said Rogonov. “We failed to do it and made mistakes. I think the reason is the same as it was for the men’s free program yesterday: nerves. After all, it’s the main start of the season.”

The team plans to push forward, however.

“We will return home and have a couple of days off,” said Rogonov, “and then we start to train again. Of course, a lot of our plans depended on the results at the Russian Nationals, but in any case, we are the first alternates for the team, so we have to be ready to go at a moment notice because anything could happen.”

Aleksandra Boikova and Dmitrii Kozlovskii, who represent Tamara Moskvina’s school, continues to make progress on the senior level. Last year, they finished sixth with 179.01 points, while this year, they moved up one spot to finish fifth with 195.80 points. The young team delivered a flawless short program and performed the most difficult jumping passes of the entire field in their long program: side-by-side triple loops followed by a slightly flawed triple toe loop – triple Salchow sequence. The 2017 World Junior silver medalists also missed a throw triple loop in the second half of the program.

The top three pair teams were named to the upcoming European Championships next month. The two pair teams that place the highest at Europeans will be named to the Olympic team based on the discretion of the coaching council.