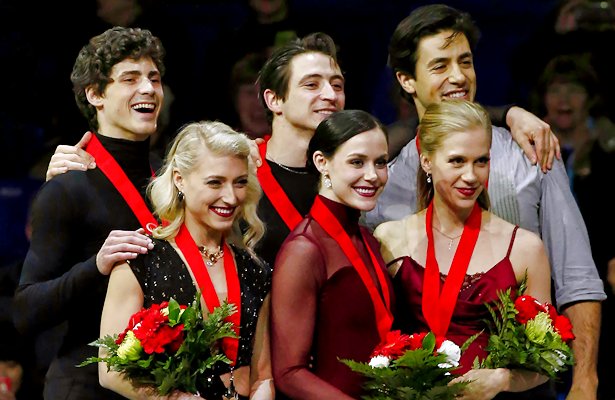 Tessa Virtue and Scott Moir performed their powerhouse “Moulin Rouge” free dance to win their eighth Canadian Championship with a total score of 209.82. The duo was unflappable throughout the competition, setting record scores, pulling +3 GOEs (Grades of Execution) and picking up perfect component scores like an eager kid on an Easter egg hunt.

“This was a big moment for Tessa and I,” Moir said. “We are really excited! We wanted to make sure we had good performances, and like the Olympics Games, there is a pressure.”

“I think we are trying to feel the program instead of approach it so technically,” Virtue said, comparing the team’s free dance outings this season. “It felt most of the season like we were trying to squeeze every point out, and sometimes that can be all consuming if you’re really thinking about each turn. Now, we just have to trust that the training is in us. It’s there, and this is the moment we have been training for and we have to get out of our heads a little bit and allow the program freedom to simply just enjoy it.”

Since their loss at the Grand Prix Final to the French ice dance team of Gabriella Papadakis and Guillaume Cizeron last month, the team made changes to the free dance music edits and added details to elements.

Even at this point in the season, Virtue is committed to the authenticity of her portrayal of the character’s death, even if dying at the end of an Olympic figure skating performance is common.

“I am not sure we are showcasing death in the same way,” said Virtue, “that can just be a dramatic end pose. I am not sure that needs to be told in the same way. Of course, that first more subtle end was more close to our hearts and what we had as a vision when we started this season, but as a natural evolution, it is really fun to play with a different and more theatrical side and a bigger ending. It’s a different energy to dive into.”

In Vancouver, Piper Gilles and Paul Poirier made good on their sentiment that they were over settling for the bronze medal at Canadian Nationals. The duo clenched the silver medal thanks to a brilliant short dance that created enough of a gap to compensate for a third-place free dance. Earning a score of 192.08, the competition marked their first and long-awaited ranking over teammates Kaitlyn Weaver and Andrew Poje.

“It’s the right step forward,” said Poirier of their finish, where they performed their new free dance to music from James Bond. “It was definitely a bit scary to debut a new program at this point in the season and we have had our fair share of doubts throughout the last month.”

“I think we had to just go into this competition with confidence in what we were doing and remind ourselves that we made the changes that we made for us,” he continued. “For ourselves. I think it was so nice to finally show that program to people and to do it in the atmosphere where people are engaged and watching it and taking part in the story. It was really special to share that with people.”

“I think we are really excited to go home and train it more and at the Olympics have the comfort level we want with it,” Poirier added. “We have a few weeks before the Games and that is what we are going to be focusing on.”

The team said it wasn’t hard to stay grounded after their surprise second-place finish in the short dance.

“Today was more like ‘new program, how do we get through this?’ and that is something that we said before we even started the program: ‘we are doing this for us,'” said Gilles. “This was our choice, our decision. We need to own it, and that is what we did today.”

“I was very pleased,” reflected coach Carol Lane. “We didn’t come to nationals to come third.”

Looking ahead, Lane was blunt in the training plan from now to Olympics. “We worked our asses off, basically,” she firmly stated. “Small tweaks here and there, but we are basically very happy with everything, so now we just train the ever-loving shit out of it.”

Bronze medalists, Weaver and Poje found themselves clamoring to return to the podium after a disastrous short dance where Poje fell on the twizzle sequence. The two-time Canadian champions roared back with a blade-perfect and personal best scoring free dance to “Je Suis Malade.” They finished with a total score of 191.09.

“You think these bad things happen to you and then you learn that it’s not bad after all,” Weaver reflected, comparing the team’s short and free dance performances. “And maybe we would not have had that moment today without yesterday. I am a firm believer in in silver linings. It’s true for us, and it makes those moments into lifetime memories.”

“I never in a million years anticipated that,” Weaver said of the crowd support before, during and after the program. “To feel the support that they were behind us, regardless. They warmed their hearts from the beginning and there is no better way to start a program.”

In fourth for the second consecutive year, Carolane Soucisse and Shane Firus were pleased to close the scoring gap between them and the podium finishers. The team earned a total competition score of 180.73 after their free dance to music by Lady Gaga and Tony Bennett.

“We feel so good,” said Soucisse. “To be honest, it was the best we have done this year and it showed with the score too. We felt soft. We felt calm. And skating after Kaitlin and Andrew too, the crowd, we really used it. It was nice.”

Sarah Arnold and Thomas Williams climbed from sixth in the short dance to fifth place overall with a score of 158.53.

Haley Sales and Nikolas Wamsteeker placed sixth overall with a dramatic portrayal of Robin Hood and Maid Marian that contributed to a total score of 154.74.

“It was as good as we could have done,” Sales said of the team’s free dance. “It’s definitely not our strongest program we had this year. We’ve had difficulties trying to play our characters a little bit.”

Wamsteeker added that portraying Robin Hood presents an obstacle. “It’s such an easy character, you think,” he said. “People get a bow and arrow and a green hat and that’s that. I am trying to get deeper, but it’s a bit difficult because there is not that much depth to the character that I know of or have discovered yet, so I am trying to make my own character rather than taking a template from someone else.” So Wamsteeker channels Robin Hood’s rascal side that he is “always going to get away with it.”

“I am more innocent, so it’s fun to play off of each other,” Sales added. However, next season, the team is keen to try something “out of our depth” says Wamsteeker. “I would love to try something jazzy or something more fast and try and challenge ourselves.”