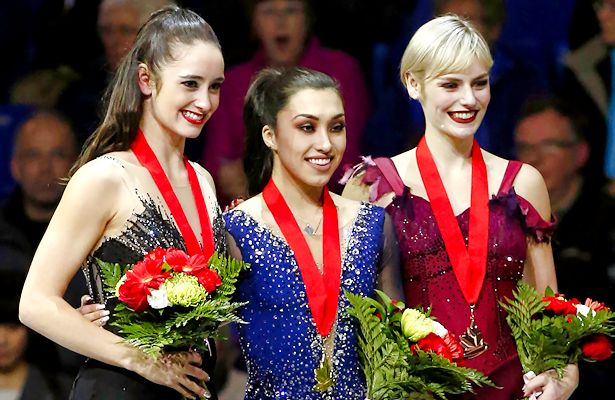 Gabrielle Daleman was red hot in her resurrected “Rhapsody in Blue” free skate to win her second Canadian National Championship and upset the figure skating apple cart that predicted teammate Kaetlyn Osmond’s coronation before Vancouver’s meet. The two-time Canadian champion finished at the Doug Mitchell Thunderbird Sports Centre with a combined score of 229.78 with a record free program score of 151.90. The precocious skater landed every triple jump in her programs – ten in total.

“After I skated that program, I couldn’t have been more proud of myself,” the exuberant 20-year-old said. “Through the entire year that I’ve had, through all the ups and downs, it is the absolute best birthday present I could ask for. I have my national title back. I have a new Canadian record. And most importantly, it’s on my birthday in front of my home country which is so near and dear to my heart, so it means the absolute world to me!”

“You’re competing against now number two in the world, she’s a very tough competitor,” Daleman said of Osmond and comparing this title win to her first in 2015. “She pushes me. When I am at home training, I make sure I picture in my mind what would she be doing, and I try to push harder. I do that with [world champion Evgenia] Medvedeva too and I keep pushing. This national title just means the absolute world to me going into the Olympics. I was not going down without a fight whatsoever.”

Like last season, Daleman has turned up her performance level late in the season after a subpar international season for a world bronze medalist.

“I think you could say in a way, I am kind of the snake,” she said, slyly. “I just sneak in the bushes and wait for my time to go out, but at the end of the day, I wasn’t really looking for much during the Grand Prix. Our main goal was Nationals, Olympics and the Worlds, and we were right on track. We kept growing and kept growing, and after Skate America, my heart was telling me “Rhapsody in Blue” and it was exactly right, and it was like an old friend happy to be back. That program is so much fun to do.”

Skating her dramatic “Black Swan” program, Osmond electrified the audience opening with a rock-solid triple flip-triple toe and a double Axel-triple toe combination, but a flawed triple loop and a fall on a triple flip resulted in a total score of 218.73.

“Going in as not the national champion, it’s almost going to give me an extra boost for when I’m there, make up for the mistakes I did here,” Osmond said about the effect of arriving crownless in South Korea.

Osmond asserted that despite her mistakes, the performance was not a write off. “It’s still probably the strongest free skate this year,” the 22-year-old from Alberta reflected. “I feel I’ve embraced the character even more. At the end of the program, I felt super strong and super powerful, and now it’s just about transferring the rest in.”

“I left a lot of points out there on just tiny little mistakes and brain farts,” Austman admitted, “but I rotated everything. I stood up on everything, and I feel really good about that. I felt like a lot of impending pressure for at least one or two months. The closer I have been getting to this, it has been more and more. You only get four minutes and two minutes (yesterday) to do everything that you need to do and it’s just a lot of pressure.”

“I knew I was capable of it,” the 19-year-old said of her bronze medal, which most expected would be earned by 2016 National Champion Alaine Chartrand. “Everyone can do something different on the day. I’ve watched these girls compete for years and I know what they can do, and I know that they also falter and I’m no different. I can do it and I can also falter too, so it just depends on how everyone does on the day.”

“I think that I deserve it,” Austman said of an Olympic berth. “I have worked so hard this season to overcome a few different things that have happened to me (this year).”

A collision with a skater in December resulted in a gash to Austman requiring eleven stitches. Last week, she had strep throat and was in a car accident on Monday. “Just a lot of things happening,” she said, smiling.

Pushed to fourth with two error-filled programs was 2016 National Champion Alaine Chartrand. Though Chartrand has medaled at each national championship since the last Olympics, and was a favorite to medal and clinch one of the three spots to South Korea, with three falls and three underrotations over two days of competition, Chartrand’s medal-winning streak ended, ill-timed, in Vancouver. She finished with 164.21 points.

“I am feeling a lot better than yesterday,” Chartrand said after her free program routine to ‘Sunset Boulevard.’ “I definitely left points out there. I skated better in my practiced this morning than I competed. It’s over now. I tried to fight through it. I did miss two combinations, which is a lot of points. I tried to feel like I have nothing to lose and everything to gain.”