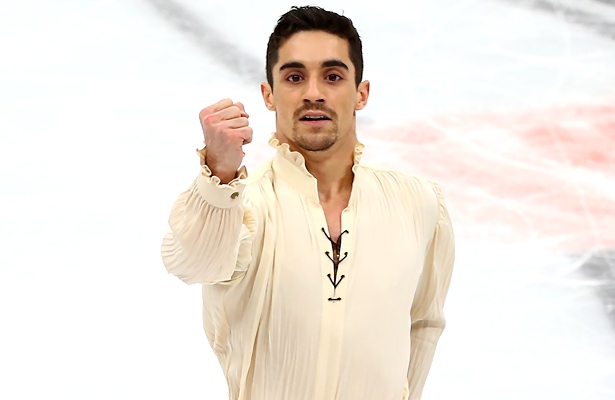 Spain’s Javier Fernandez, who took a confident lead in the short program, won his sixth consecutive title at the 2018 European Figure Skating Championships with 295.55 points in total. He was joined on the podium by two Russians: Dmitry Aliev (274.06) and Mikhail Kolyada (258.90).

Fernandez was in class of his own in Moscow. He wasn’t flawless in either of the programs, but still had a 10-point lead in each. In the short, he turned out of the landing of the quad Salchow and in the long he missed a triple Salchow and triple flip in the second half to the program.

According to the student of Brian Orser, he wasn’t looking for perfection in Moscow, but was looking to have one more practice before the Olympics.

“I think it was a good short program facing a big competition which is coming up,” said the 26-year-old after the short program. “So, we are happy, and that’s it. I lost a level in the step sequence and I know why — I kind of stepped out of the quad salchow and sometimes it happens. So, nothing major, few little mistakes, but as I have said, we were not looking to be perfect.”

He repeated the same sentiment after the long.

“Still, we have to keep working and keep improving,” he continued. “More programs, more run-throughs. I know the mistake I have made in this program — it was maybe because I was a little bit too slow coming into the jumps. I know that it won’t happen to me at the Olympics. At the Olympics, it will be like ‘I have to give it all.'”

“So, more than that I think it was a good program, overall,” he concluded. “I started really strong and I won.”

The Spaniard has been undefeated at the continental championships for the past six years. He says that despite a long-established dominance, the title still means a lot for him.

“It has also been a goal for this competition to skate so well to try to win it,” said Fernandez. “To be six-time European Champion, it’s more of a step forward to make even more history. It’s pretty amazing already. I can be proud of myself for what I got in this career and hopefully I can get much more.”

“Some we talk about it [the upcoming Olympics,” he revealed, “but overall, we try to keep practices as normal as possible. We know that the Olympics are very important for everybody and everybody got really stressed out. Even if you have to change something, you shouldn’t do it because the Olympics. You should do it because you want to improve more.”

“It has been a long time since Spain got a medal at the Winter Olympics,” he added. “So, it will be something important for me. Important for the sport in Spain and of course for figure skating in Spain. So, it will be good for a lot of things, so I will do my best to make it happen and bring a medal for Spain. But I know how hard competition is and how strong the skaters are, and a lot of things can happen.”

Aliev managed to upstage both his teammates in both programs, which is quite an achievement of the European Championships debutant.

“I’m happy with the technical side, it was almost perfect,” said the 2017 ISU World Junior silver medalist. “The short program went ok, but then I was nervous today. But for the first half of the program, I kept control of myself, and then in the second half, I felt confident and enjoyed it. I am incredibly happy.”

“I am extremely proud of him,” said his coach Evgeniy Rukavitsin. “I am proud of how he kept his focus, despite skating last in the last warm-up group. I watched him very closely and I saw that as soon as something was even a little bit off, he immediately re-focused and corrected it. It’s the greatest achievement of my coaching career.”

The 18-year-old admitted that his program to “To a Build a Home” by The Cinematic Orchestra is deeply personal for him.

“The program is quite emotionally difficult because it is very personal to me,” he shared. “It is related to my parents. It is my life. I moved away from my parents to live alone in a big city, while my parents lived in a different city. So, the story of my program is that at the start I say goodbye to them, in the middle I see them again and embrace them, and at the end I am on my own again, building my own career.”

The 2018 Russian National bronze medalist admitted that he is thrilled to compete against Fernandez.

“Honestly, Javier has been a role model for me for a long time,” he said. “Even when I was just a little kid. It is an honor to be on the podium with people who are such big figures in skating, who have proved themselves, and have already made history in our sport.”

According to Aliev, he does not think about upcoming Olympics.

“In my case I still haven’t even thought about it because the final decision about the team (who will represent Russia) will be made on Sunday,” he explained. “So, I would rather not guess what will happen, but if I do go, then of course I will prepare and make sure I am in my best form, so I can show my maximum potential at the Olympics.”

Kolyada rose up from the fourth place to repeat last season’s bronze, but the 2018 Russian Champion was unhappy with the way he skated.

“I don’t know what happened,” said the student of Valentina Chebotareva after the short program, in which he fell out of the landing of a quad Lutz and popped a planned quad toe loop into a double.

“I still don’t know what happened,” was the first words he told the press after the long in which neither of his quads worked as planned (he fell on both the Lutz and toe loop and popped a Salchow into a triple). “It was a bit of everything, some things were good, some were bad. Good thing was that I did all jumps expect for quads. Bad things were Lutz, Salchow and toe loop.”

“There was no particular reason for it,” he explained. “I recovered quite well after the Nationals, I trained well. Of course, it is difficult to skate the long program with three quads, but to settle for just a toe loop, it would be like 10 years ago. The sport has moved on.”

“On a scale of five, I’d give myself a four with a big minus for my performance today,” he summed up.

Deniss Vasiljevs from Latvia slipped from third place in the short program to fourth place overall after he fell on an underrotated quad toe loop and missed two more jumps towards the end of the program (243.52).

“I don’t think about placements,” said the student of Stephane Lambiel. “I skate for pleasure and to feel the energy of the crowd. I’m am super happy if I manage to skate clean, but today I was fighting for jumps, so it happened the way it happened.”

The skater, who put a quad toe loop as a third jump in his long program, admits that his success rate with the element is not 100% yet, but the placement of the jump within in a program is entirely intentional.

“I am getting there,” said 18-year-old. “As for doing it as a third jump, because I love to cook, I treat this program like a cake. I start off strong with a triple Axel – double toe and another triple Axel. And then I have a choice: should I do an apple tart with a cherry on the top and go for the quad or should I do the regular tart and go for the triple?”

Alexei Bychenko from Israel rose from eighth place to the fifth (238.44).

“I was in a bad mood after my short program because I did not skate how I wanted, and I did not get the levels I wanted,” said the student of Galit Chait Moracci, Roman Serov and Nikolai Morozov. “So, I tried fighting for every element and tried to complete the maximum possible. I made about 90% and 10% were mistakes. Of course, I will now work on these for the Olympics.”

Alexander Samarin from Russia rounded up top six. Like his teammates, he also attempted a quad Lutz, but fell on the jump in the short program and underrotated and stumbled out of in the long (229.81).

“I don’t feel any emotions right now,” said the 2018 Russian National silver medalist. “There was one positive thing about this experience: the incredible public who created such a warm and classy atmosphere. They all supported me, it was fantastic.”

“There is not much to say about the performance itself,” added the student of Svetlana Sokolovskaya. “I don’t know why I didn’t skate clean. I wanted to do three quads, but two were flawed. It’s something for me to work on and to improve.”

“I guess I did not approach the competition in the wrong mood,” he contemplated. “Maybe I was too calm or too nervous. Anyways, the problem was in my head; there was nothing wrong, technically.”