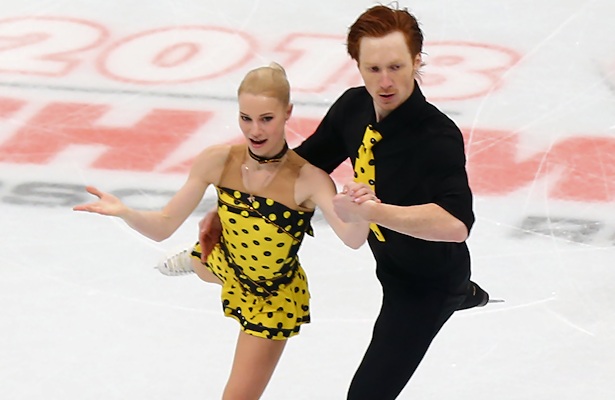 Tarasova and Morozov, who confidently captured the Russian National title in late December, started the competition with an uncharacteristically weak performance in the short program where they missed both side by side triple toe loops and a throw triple loop.

“We can’t explain what happened,” said Morozov afterwards. “There were no reasons were for these mistakes. We were healthy, had no injuries and had good practices. We won’t make a tragedy out of it, but we will draw conclusions.”

One day later, the 2017 European Champions delivered a near-flawless routine featuring a level 2 quad twist, as well as a triple Salchow, triple toe loops, and level four non-jumping elements to pick up 151.23 (76.43/74.80) points for the long program. This score catapulted the team all the way to the top.

The students of Nina Mozer and Robin Szolkowy did not deny that they were highly motivated to do well after a less than stellar start of the event.

“We were very angry and upset yesterday,” said Tarasova. “Angry at ourselves, angry at the situation as a whole. Our practices here were very good and we had to prove that the short program was a fluke.”

“Today we skated the way we did in practice,” added Morozov.

Even though it is common for the athletes to say that it is harder to defend the title than to win it for the first time, the 2017 ISU Grand Prix Final winners learned it the hard way.

“This victory was harder than the last,” admitted Tarasova. “Last time we skated the short and free program well. This time I made mistakes in the short program, so we had to make up for it in the free skate. That made winning our second title harder than the first.”

“We’re very happy we managed it all,” she added. “Yesterday was a real shock for us, but today we managed to gather ourselves. We felt really strong emotions at the start, but after we successfully did the quad twist, we felt calmer. We know what we had to do and what we can do, and today we skated with only small mistakes, so we are happy.”

“The short was bad for us,” her partner explained. “The free skate was just normal. Now, we need to continue to prepare for our next event. I think we will make changes in the short to avoid the mistake at the beginning. The free skate doesn’t need corrections. We will just keep trying to improve.”

The 2018 Russian National champions says that skating their playful short program to a medley of “Candyman,” “Nasty Naughty Boy,” and “Ready Teddy” gives them a lot of pleasure.

“We worked a lot on this program,” said Tarasova. “Worked out every little detail of the choreography. But very often during the performance, Volodya will make a move or a gesture that I have never seen before and it became very interesting for me to see what he would do next.”

Stolbova and Klimov rose up from third place in the short program to capture the silver despite problems with side by side jumps. Stolbova fell on a triple toe in the short and triple Salchow in the long, while Klimov doubled the second triple toe loop in the long. The team scored 138.96 (65.57/74.39) points.

The rest of the elements were good and 2015 ISU Grand Prix Final winners were arguably the most impressive team overall with a polished and confident delivery of both the “Became Mucho” short program and “Carmen” long program.

The students of Nina Mozer are known perfectionists, however, and despite their rather positive outcome of the competition as whole, they were unhappy with themselves.

“I think it was bad,” said Klimov about their performance in the long program. “There were quite a few mistakes. Each of us missed a jump in turn, and there were some other things, which probably no one else has noticed, but I did and I didn’t like it at all.”

When asked what has to be changed in order for them to land their jumps well, Stolbova said that there is nothing in particular which required attention.

The 2014 Olympics silver medalists were also quick to shoot down any talks about the upcoming Games.

“We are not going anywhere as of yet,” stated Stolbova, referring to the IOC ruling which says that Russian athletes will be invited to the Games by a special commission rather than being nominated by their national Olympic committee. “Until we have an invitation letter [for the Olympics], it’s a moot point and there is nothing to discuss.”

Zabiiako and Enbert delivered a clean short program set to “The Summer Knows” by Michelle Legrand, in which every element received level four. When asked about the secret to the success, the team modestly said that they are not doing anything special.

“I can’t say how we do it,” said Enbert. “We are trying to keep working and improve everything. From the competitions and practices, we record our practices and watch with videos. It is just our usual work and I can’t say that we are doing something special. We are just trying to improve each time.”

The team also said that they were not tempted to skip the European Championships in order to better prepare for the Olympics.

“We do the same run throughs in practice at our home ice rink, only without spectators,” said Enbert. “However, for me, competing is better than training just at home with nobody watching and not hearing anything.”

The 2018 Russian National Championships bronze medalists were strong in the long program as well, but they had a tough landing o their tripe toe loop – double toe loop – single loop combination and performed only a double Salchow as a solo side-by-side jump.

“We are happy overall today,” said Enbert. “We made a mistake on the combination, but it did not ruin the overall performance. We are happy, not completely, but pretty much.”

The team said that they were inspired by skating at home.

“It was definitely not a burden to skate at home,” said Zabiiako. “We felt a lot of support from the public.”

“We might have had some thoughts that it was going to be extra pressure during our preparations,” added Enbert, “but it was never an issue once the event began.”

The skaters’ success was all the more remarkable as Zabiiako sustained a shoulder injury between National and European Championships.

“It did not affect our preparations much,” said Enbert. “Right after Nationals, we worked more on things that required us to use our legs and after the New Year, there were no restrictions any more.”

When asked if they expected to be in a position to win a medal in 2018, the students of Nina Mozer admitted that they have never thought about it.

“We had a long-term goal,” said Enbert. “Like overall development, the Olympics, and so on. We also had immediate short-term goals for any given competition. We simply never had this kind of middle-range goal.”

France’s Vanessa James and Morgan Cipres staged an upset in the short program by defeating all three home teams, but made several mistakes in the long program and missed the third place by the narrowest of margins: 0.01 points (210.17).

“Of course we’re very disappointed,” said James afterwards, “but there were just too many mistakes. I don’t know if it was the pressure of being first or skating last. I just don’t know. I had a lack of concentration on the first jump, but also the lifts were off. I just don’t know what happened. It just sucks, but it happens to the best. Now it’s back to work!”

She accepted the outcome in good grace, though.

“We know that the Russians are strong and we knew that we had to skate clean,” she added. “There was absolutely no room for errors and we made a few.”

“We are getting there, though,” she added jokingly. “We defeated the Russians in the short program here, and before that, we defeated the Germans in the long. Now all that we have to do is to combine yesterday’s short program with the long program from World Team Trophy or Skate Canada and it will great. I hope it will happen at the Olympics.”

Vanessa Marchei and Ondrej Hotarek from Italy finished fifth with 204.20 points. The students of Franca Bianconi, Rosanna Murante and Dmitri Savin were also clean in the short program, but Marchei doubled the planned triple toe loop in the long.

“I already promised him I won’t do the same mistake at the Olympics,” said the 31-year-old afterward.

“Yes, you have to remember that it’s three turns, not two,” added her partner.

“We are improving with each competition,” added Marchei. “We were concentrating, we managed it well. The little mistake did not affect anything else in the program.”

“We agree with the placement, overall,” said Hotarek. “Maybe not with yesterday’s scores, but today was fair. Pair skating has become so competitive. Everyone can do all the elements, even the couple in the first group can do triple twists and side by side triple jumps. One mistake can cost you not one place, but maybe two or three. I think the new judging system is more fair. In the short, we were really close to the medals. Today, it was like five points behind, which is not too bad, because it has been much more in the past.”

“In three years, we had such an adventure,” said Marchei. “I learned so many things which usually take so much more to learn. I think this European Championships is a great conclusion of the work we did together in three years. We are improving so much.”

“We are in the group with people who has been skating together for ten years or more,” added Hotarek.

“I don’t feel at all that I don’t belong to this group. This is where I am meant to be,” added Marchei.

The team had high praise for the public in Moscow for their support.

“There was so much love in the short program, it was quite amazing,” said Hotarek. “I mean I would come back one more time just to skate our short program in front of this public.”

“You know there is a photo of us in the hall here at the venue,” he added, promising to post a photo proof of it later on.

The 2018 Italian Champions, Nicole Della Monica and Matteo Guarise, rounded up the top six with 192.38 points in total.

“It’s so much love, in the short program it was quite amazing,” said Hotarek. “I mean I would come back one more time just to skate our short program in front of this public.”

“You know there is a photo of us in the hall here at the venue,” added Hotarek, who promised to post a photo proof of it later on.

The 2018 Italian Champions Nicole Della Monica and Matteo Guarise rounded up the top six with 192.38 points in total.