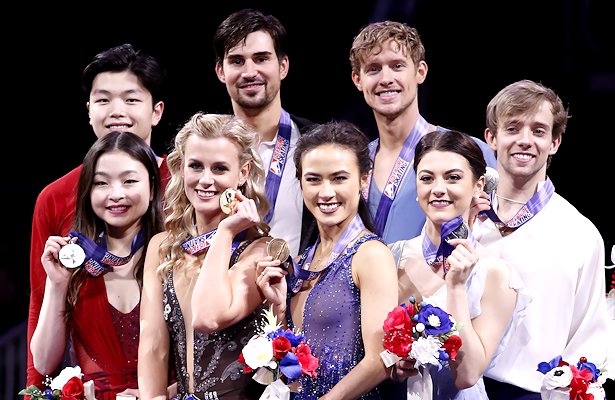 By the slimmest of margins, Madison Hubbell and Zachary Donohue took the gold in ice dance, defeating silver medalists Maia and Alex Shibutani and bronze medalists Madison Chock and Evan Bates at the 2018 U.S. National Figure Skating Championships on Sunday in San Jose, Calif. Only a half of a point separated the three teams atop of the podium in ice dancing.

Skating to bluesy routine to “Across the Sky” and “Caught in the Rain,” Hubbell and Donohue opened with level four synchronized twizzles that earned 3+ grades of execution (GOE) across the board. The team earned a level four on all elements except for their diagonal steps (level 3) and their phenomenal skate resulted in a break away from a string of three-consecutive bronze medals at Nationals. They finished second in the free dance (118.02), and with a total score of 197.12 points, were able to capture their first national title.

“My mind always works like a flashback,” Donohue, 27, said. “There’s always things that weren’t good enough, so that’s what comes to mind (at the end of the performance). This was a culmination of everything.”

The team, which trains in Montreal under Marie-France Dubreuil, Patrice Lauzon, and Romain Haguenauer, were fourth in the Grand Prix Final after a silver medal at the NHK Trophy and a bronze at Skate Canada. They were ninth at last year’s World Championships in Helsinki.

“We had a goal of staying focused and not making mistakes like we did in the past,” Hubbell, 26, said. “We did not have two perfect skates, and there is still a lot of room to grow. The competition is really intense. All three teams would love to feel the Olympic ice as much as possible. ”

“Whoever skates the best those days will win as we are all very close to each other,” she continued. “We know we can’t control the results, all we can do is our best. We really love performing, and our goal today was being present. As soon as we met the four minute and 15-second mark, and we couldn’t give away points, we could let it out and be proud of how we finished. It’s a whirlwind experience, something brand new for us.”

They won the bronze medal at the same arena in their first Nationals as a team in 2012.

“It feels really cool to be in San Jose, so many familiar faces around us,” Hubbell said. “Now our team in Montreal has helped us attack the blues with more sophistication. The steamy quality is something that happens, that’s the way it comes out.”

The Shibutanis finished third in the free dance and and slipped to third overall (114.60/196.93 points). While solid, both step sequences were graded a level three and their program component scores were slightly less than that of the two teams which placed ahead of them. A few missteps in the diagonal sequence resulted in low GOEs and eliminated their chances of a third-straight U.S. title. The defending world bronze medalists, 23 and 26, have now medaled for 14 consecutive years at nationals through all of the ranks. They were ninth at the Sochi Olympics.

“Today we had a mistake in the diagonal,” Maia acknowledged, “but we have a lot to be proud of, and we have a lot of time to keep pushing ourselves.”

Chock and Bates curved and spun in perfect symmetry to their “Imagine” program. A level four diagonal step sequence garnered 11.11 points alone, and the team earned +3 GOEs across the board for their level four intricate lifts. They finished first (118.99) in the free dance with the highest technical score of the night, but with a total score of 196.60 points, were not able to move up the podium. They have now medaled at nationals for six consecutive seasons, winning in 2015.

“I think we’ve improved a lot over the past year,” Bates said. “This week, we would love to have a different result, but the message we are trying to convey on the ice is connecting with people, and that’s an even more important thing. I wouldn’t say it’s frustration, as much as knowing what we need to work on. The short dance is where there is a deficit, and that’s what we are going to work on over the next four weeks.”

This season, Chock and Bates were fifth in the Grand Prix Final after silver medals in both China and France. They were seventh in the 2017 World Championships and eight at the 2014 Olympics. Bates was 11th at Vancouver in 2010 with Emily Samuelson, making him a three-time Olympian.

Fourth-place Kaitlin Hawayek and Jean-Luc Baker performed double-digit scores to an opening level four circular step sequence, as well as a level four diagonal steps later in their routine. The team earned a level four on nearly all their elements and showed the second highest technical score, finishing with 187.61 points, improving from fifth in the U.S. the past two years.

“Last year we had a fall on the lift, and we also had a fall on the twizzle,” Baker said, “so we missed two of our eight elements in terms of our score. This year, we made the free dance the same as last year, and we made some tweaks. We really wanted to show people and the fans of the U.S. how we’ve been training.”

The 2014 World Junior champions, ages 21 and 24, were third at Golden Spin in Croatia last month after placing fourth at Skate Canada and fifth at Skate America.

“We took those falls we had and it motivated us,” Hawayek said. “Going into the next quad (four-year Olympic cycle), we’re going to work on our maturity, looking at small details. When you look at the teams that are first through third right now, I think that is the thing they are stellar at is making sure there is not one arm off. We’ll take this is a confidence boost because our scores are comparable to all of theirs. It’s motivation to push ourselves.”

Rachel and Michael Parsons finished fifth with 176.07 points, just ahead of their rivals from juniors, Lorraine McNamara and Quinn Carpenter (175.19).

“The performance was really well,” Michael said. “I am really happy with how it turned out. I think we’re more mature skaters now.”

The Parsons, ages 20 and 22, are the defending world junior champions.

“I think this was a good step for us,” Rachel added. “It’s always difficult to win in an Olympic year. These top three teams are always going to be at the top of their games, and that’s what inspires us. We always support each other.”

There were similar feelings from the team that won the world junior title the year before, in 2016.

“It was a solid skate, everything we wanted,” McNamara said. “Everyone tells you ‘It’s so different, it’s so different,’ but you don’t know how different it is until you are in it. We learned a lot this year, and we want to keep learning more. When you get to senior, the older teams who have been there for a while, you don’t want to be them, but you just want to learn from them and apply it to your own character.”

McNamara and Carpenter, ages 18 and 21, were fifth in the Cup of China on their first season on the senior circuit.

“We usually do the short and the free dance one day after another,” Carpenter said, “so you just do one after another and stay in competition mode. This week was a little different, as far as getting your head into place for a different music and program.”

The top three teams were named to both the US Olympic and World team. Hawayek/Baker, McNamara/Carpenter, and Parsons/Parsons were all named to the upcoming Four Continents team.