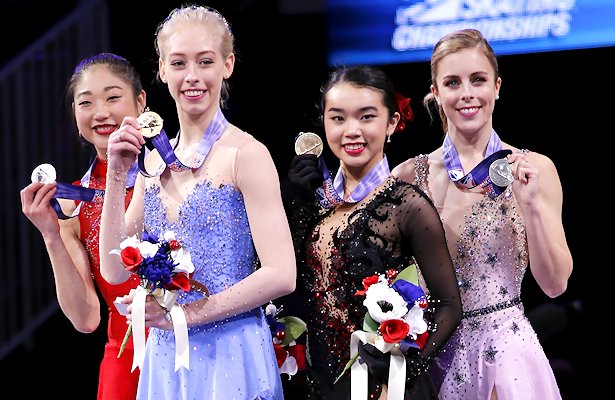 Tennell, who turns 20 on January 31, opened with a triple Lutz-triple toeloop, and she added a brilliant triple Lutz-double toeloop-double loop, in recording a 145.72 long program for 219.51 total points. Two days earlier, she set a Championships record with 73.79 points, passing the mark Chen set in Kansas City last season.

“Going into it, I could really feel the intensity in the arena, and I am really happy with how I skated,” said Tennell, who improved from her ninth place showing last year. “It’s been a long road. Going into this year, my main goal was to stay healthy. It’s an Olympic season and somebody has to go.”

The calm and cool Tennell was predicted by few to win the title so early in her career. In fact, she wasn’t even on the original list of skaters for the Grand Prix season when it began. She was a late insert for Skate America and was a surprising third. She was also seventh in March’s World Junior Championships.

“I wouldn’t say I was nervous,” the Carpentersville, Ill. native said about going into these competitions. “I was a little bit anxious in the warm-up, but with the time I had between the warm-up and when I skated, I could calm myself down and tell myself I could do it. I am still quite shocked.”

Tennell added that she first believed she could win the U.S. title and garner a spot on the Olympic team when she won the U.S. junior title in Greensboro, N.C. in 2015.
“I always loved the challenge and loved performing,” she said. “My consistency really helped earn me that spot.”

Tennell also said she chose her “Cinderella” program because she always loved the story, saying she looks like the character and her mother even made a “Cinderella” dress for her when she was three years old.

The silver medal for Nagasu brings her career full circle. It was the highest finish at Nationals for the 24-year-old since her 2010 silver that led to a fourth-place finish at the Vancouver Olympics. The 2008 U.S. champion was fourth in three of the last four years at the event. Although points were deducted on her trademark triple Axel (two-footed) at the beginning of her “Miss Saigon” program, Nagasu left the ice in tears of joy, as she amassed 213.84 total points.

“I am super happy with how things have gone,” Nagasu said. “Even with mistakes, I scored the highest I have scored in the U.S. Championships, and I am so proud of myself. This is about my journey. I am enjoying that performance and what training that went into it. I went into this performance not expecting to be perfect. I was capable of doing this performance last year. Long programs are not easy, they are a test of our mental strength.”

Nagasu was a fan-favorite this season, and she acknowledges she doesn’t need to be reminded of being left off the 2014 Olympic team, despite winning the U.S. bronze medal. Still, that is a fact that follows her around. She lamented on the difficulties of her success at a young age.

“As a skater, I started out really strong,” Nagasu said, “and as I grew in the public eye, I feel like I have had rough seasons. I feel like I have always been one of the hardest working women in the rink. During the last Olympic cycle, I was so hard on myself, and I didn’t want to put that responsibility on myself again this year. I didn’t want to get on myself about a decision that was out of my hands.”

The 18-year-old defending champion Chen under-rotated her first two jumps, but rebounded with a double Axel-single loop-triple Salchow combination to claim the bronze medal with 198.59 total points (129.11 free skate). Her result was incredible considering how poorly she felt.

“I couldn’t sleep at all after the short,” Chen said. “I must have caught a virus and was stuck in bed all day. I couldn’t do my practices. I had a lot of body aches and pains everywhere. I’ve done all I can, and I will keep thinking as positive as I can and all of the great things I have done. I spent the whole morning looking at going to the doctors. To keep thinking possibilities and visualizing the perfect skate today, I had to keep fighting for today.”

Skating just miles from her hometown of Fremont, Calif., Chen said her mentor Kristi Yamaguchi gave her encouraging words to fight through her illness.

“I am extremely proud of what I did today,” Chen added. “I trained so hard for this moment, and I am not going to let some stupid sickness win, and I’ll keep fighting. I’ve dealt with a lot of things this season, including music changes and program changes, so I knew I would feel so much pressure, and I managed to pull through. I have what it takes.”

Wagner opened with a triple flip-triple toeloop, but she under-rotated a late triple Lutz. She also only received a level three on her footwork and final spin. The 26-year-old admitted she was not satisfied with her score of 196.19 (130.25 long program).

“I am absolutely furious!” said the three-time U.S. champion and reigning silver medalist. “For me to put out two programs as solid as I did at this competition and to get those scores, I am furious. I am a performer, and that second mark is not there. I am absolutely OK with them being strict on my rotations – that’s what U.S. Figure Skating should demand of its judges, but it needs to be across the board. I don’t necessarily feel it’s been that way. Even though I am not happy with the score, I delivered something that was solid and something that I am proud of. It needs a little more legwork, but that’s because it’s a month old, and I have no doubt in my mind that ‘La La Land’ was the program I needed to get where I wanted to be. This is how I feel, and I delivered when I needed to. All of these girls delivered when they needed to. I want to be on that Olympic team, and I am really mad that I am in this position again.”

Mariah Bell skated first in the final rotation and opened the intensity in the rink with a triple Lutz-triple toeloop. She lost points transforming a triple Salchow into a double Axel during her “West Side Story” program and placed fifth with 192.34 points.

“I am so excited to go back home and work on the following seasons,” Bell said. “Being able to express myself and believe in my training, that’s a huge part of what I want to accomplish in the future. I’m so proud of that skate. Whatever comes out of this, I feel so grateful for the experience here.”

Bell, 21, and the defending bronze medalist, said she has learned a lot about herself this season and brought up her ninth-place finish at the NHK Trophy in Osaka, Japan.

“I feel like a different person now than when I was in Japan,” she said, “learning how to compete with pressure in a packed arena. I am super proud of that. I learned to trust myself and believe in my training.”