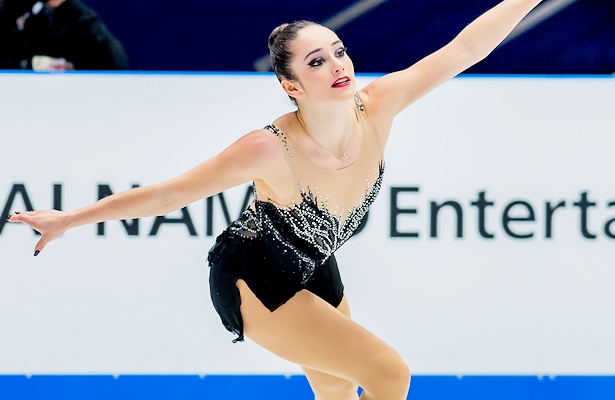 Kaetlyn Osmond became the first Canadian lady to win a World title since 1973 at the 2018 World Figure Skating Championships.

In what was a surprising turn of events in the Ladies Free Skate, Kaetlyn Osmond cinched the gold at the 2018 World Figure Skating Championships on Friday in Milan, Italy. Japan’s Wakaba Higuchi rose to capture the silver, while teammate Satoko Miyahara earned the bronze.

Russia’s Alina Zagitova, who stood in second after the short, took three uncharacteristic falls in her long program to finish seventh in the free skate with 128.21 (62.34/69.87) points and slipped to fifth overall (207.72). This was the first time this busy season that the 15-year-old Olympic champion made any mistakes or was defeated.

Carolina Kostner of Italy, who was the leader after the short program, also encountered problems. The 2014 Olympic bronze medalist doubled her opening Lutz, popped and stepped out of a double Axel, and then fell on a triple Salchow. She finished fifth in the free skate with 128.61 (54.71/74.90) points and fourth overall (208.88), missing the podium by nearly three points.

After subpar programs from the top two contenders, the door was wide open.

Osmond, who was fourth after the short program, put out a solid routine to Black Swan with the exception of a turnout on the landing of a double Axel-triple toe. The 2018 Olympic bronze medalist also received an edge call on a triple Lutz, but landed four more clean triples, earning level 4s for her spins and footwork along the way. She scored 150.50 (75.35/75.15) for a first-place finish in the free skate and overall (223.23).

“Today was so exciting for me!” said the 22-year-old. “After being fourth in the short program, I really wanted to fight in the long program and put out as good a skate as I could. I was nervous, and after a long season, it was definitely the most tiring program I’ve ever done, but I’m glad I was able to stay focused and fight to the very end. Hearing the crowd is always exciting, they were super enthusiastic which gives me a lot of energy, and it was great to see the support for Carolina, especially in her home country. It’s always exciting, even if you are not from that country it is exciting to see, and I used that energy myself to stay focused and do what I can do.”

The skater said she wouldn’t have believed it had someone told her yesterday how the podium would shape up.

“Still sitting here feels very unbelievable to me,” said the three-time Canadian champion. “I was fighting to skate clean and fighting to hit the podium. Being World champion was definitely something I never expected. Carolina (Kostner) and (Alina) Zagitova are both very strong and consistent competitors, and although unfortunately it didn’t work out for them today, they are always incredible to watch and I’m just happy I was able to do what I was today.”

“This ‘Black Swan program’ is one I’ve always wanted to skate to,” she added. “(Tragedy) and drama in what I skate on the ice makes me feel in a character and takes me out of my head. It takes away the nerves. I like telling the story of the swan as it brings out strong characteristics on the ice. Each time I hit the end position, I’m excited however it went, and today it went really well.”

The skater, who trains in Edmonton, Alberta, under Ravi Walia, is the first Canadian lady to win the world title since 1973 (Karen Magnussen).

“Canada has such a strong history of competition in all disciplines, just as the gold medal was always a fight for the ladies, hopefully now there’s a running for it,” said Osmond. “Hopefully we’ll be able to hit the podium a lot more.”

The 2017-18 Grand Prix Final bronze medalist has been on an emotion high since returning from the Olympics.

“It was definitely a crash and definitely emotional to get back onto the ice to train,” said Osmond. “It was definitely hard, but I wanted to compete again and Worlds are always exciting for me. It’s only my fourth and I wanted to skate great. I had something to prove to myself as I’ve been training and competing well all year, so I wanted to focus and skate two good programs, as good as at Olympics, if not better. Unfortunately, the short program was not the short program I was hoping for, but that kept me focused and trained to skate the free program like I did today. That was the training I’ve done all year.”

Osmond is heading to Japan to tour with Stars on Ice and will then return to Canada to do the same. “I have a lot of touring and a lot of shows which I’m very excited for. Then I can relax a bit and finally soak in this entire year and get ready for next year again.”

“This year has been a giant learning experience for me,” she summed up. “At each competition, I have learned something about me, about my skating style and the way I compete best. Being able to peak at the right time, at Olympics and then here, I realized I learned how to train at home to be able to do that. Just the knowledge I can do all this, that not just in practice I can skate clean, but I can finally do that at competitions, that’s the real learning experience for me.”

Higuchi was solid in her routine to music from Skyfall, landing a total of seven triple jumps while showing strong level 4 spins. The two-time World Junior bronze medalist finished second in the free skate with a season’s best of 145.01 (74.72/70.29) and rose from eighth to second overall (210.90).

The skater, who trains under Koji Okajima, felt like last season Japan lost a spot for the ladies due to her mistakes. “I felt responsible for getting it back this year. Unfortunately, it was too late for the Olympics, but I was able to win a spot for Worlds which will be hosted in Japan next year.”

The three-time Japanese medalist plans to do an ice show when she returns to Japan and then will take a short break before creating programs for next season.

“Starting at the beginning of this year, I started to practice being aware of not making mistakes in practice,” said the skater when asked what she had learned this season. “I think I was able to show the result of that here and at the Challenge Cup. Also, towards the end of the season this year and last year, I was feeling very grateful to my programs and skated with those feelings and felt it was not just technique that was important, but important to have those feelings too.”

Higuchi said there were times when she had problems with control in her programs and recognized the mistakes as a result.

“This season I was more stable, the jumps were more consistent,” she said. “I was trying to control them and not jump too high and skate clean and consistently. That was my approach and I think this season I have been able to do that pretty well. As for higher component marks, the key was to skate consistently. I tried to appeal to the judges more this season. I hadn’t been able to get 8s and 9s for components, but right now I think I’m getting 8s consistently and I think appealing to the judges is really important. I wanted to try different things that other skaters haven’t tried, for example in the choreo steps I try to be unique and original, and I think I was rewarded for that.”

Miyahara took a fall on a doubled Salchow and underrotated two other jumps in her routine to Madame Butterfly. The four-time Japanese champion showed good artistry, earning the third highest program component of the evening. She scored 135.72 (64.20/72.52) points for a third-place finish in the free skate and overall (210.08).

The medal was unexpected for the 19-year-old from Kyoto who said she felt stiff and that her jumps were “small.”

“I was very excited to hear the cheering, but I was a little bit nervous and I had fun to skate for the fantastic crowds,” she said, regarding skating in the same flight group as Kostner.

The skater, who is coached by Mie Hamada, Yamato Tamura, Cathy Reed, and Haruko Okamoto, wants to be a skater that moves people’s hearts. “Of course it is necessary to skate perfect programs, so I need to work hard. Other things I think I have to work on is more like dances, ballet, everything.”

Miyahara, who is working to become more expressive and overcome her shyness, plans to tour with Stars on Ice and then rest her body for next season.

“The whole season was a big effort for me, especially this year as I had an injury at the start of the season,” she said. “I was able to go to Olympics and able to skate here in good shape, so everything was a very good experience for me.”

“Next season I have no idea what I’ll be skating to, but I want to practice dance on the floor more and different types of dance so it can be used for any type of program,” the two-time Grand Prix Final silver medalist summed up.

USA’s Bradie Tennell underrtoated two jumps and received an edge call on both of her triple Lutzes, but finished fourth in the free skate with 131.13 (65.83/65.30), moving up from seventh to sixth place overall (199.89).

“I feel really good about that performance,” said the 2018 U.S champion. “I went out there and I just wanted to enjoy myself and skate a clean program and I feel like I did that.”

Loena Hendrickx of Belgium was near-perfect in her routine to “Diferente,” which featured five solid triple jumps as well as level 4 spins and footwork. The 18-year-old sister of Jorik Hendrickx earned a personal best of 128.24 for  sixth place in the free skate and moved up one spot to ninth overall (192.31).

“I feel really good,” said Nagasu. “It was a long season for me, but I wanted to finish it off strongly and I did my best to do that today. I think we could all say that [the season] was a very difficult, but rewarding journey and I’m glad to have finished it the way that I did. I think I finished strong and although I may have dropped a couple of places, I’m happy with how I skated.”