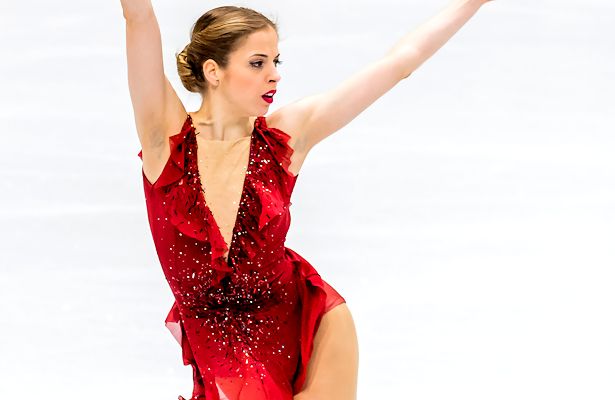 Carolina Kostner of Italy earned a Season’s Best in the short program at the 2018 World Figure Skating Championships.

Carolina Kostner of Italy took a surprising lead on home ice in the Ladies’ short program at the 2018 World Figure Skating Championships in Milan. Russia’s Alina Zagitova is currently in a close second by less than a point, followed by Satoko Miyahara of Japan.

Kostner delivered a flawless and elegant routine to “Ne me quitte pas,” which featured a solid triple flip-triple toe, triple loop, and double Axel. The Olympic bronze medalist earned many positive grades of execution (GOE) on her level 4 spins and footwork, scoring a personal best of 80.27 (41.30/38.97) for a first place finish.

The 31-year-old, who’s goal was to be technically clean, was very happy with her performance.

“The special moment for me was in the middle of the program,” explained Kostner. “I have this passage where I could actually hear the silence, and it was very special because if I think back 15 years ago when I started skating internationally, nobody in Italy followed skating. Now there is a venue full of people sharing this passion with me. I am so happy to see I can maybe inspire people, maybe be a guide; that is very special. I’m very, very happy.”

The 2017 European bronze medalist took a few days off after the event before resuming training. This is the third major competition she has participated in on home soil.

“The joy and the honor I felt was much bigger than the fear,” she said.

The Italian champion is coached by both Alexei Mishin (in Russia) and Michael Huth (in Germany).

“We work as team and we work as an extraordinary international team,” Kostner offered. “That is a unique way and I am very thankful and very honored to be able to work with such an amazing professional team of coaches.”

Zagitova, who remains undefeated in every competition thus far this season, had a slightly tight landing on her triple Lutz-triple loop, but nailed her triple flip and double Axel in her “Black Swan” routine. The 2018 Olympic champion also showed strong level 4 spins and footwork, finishing a close second behind Kostner with a score of 79.51 (42.51 /37.00). Her technical element score was nearly three points less than what she earned in Pyeongchang last month (45.30), mostly due to lower GOEs.

“Today I felt a bit tight in my body, maybe some nerves, although I don’t know why,” the 15-year-old confessed. “But I’m glad I managed to skate a clean program, although there were some little mistakes which was not good. To be honest, I was more nervous here than at the Olympics.”

There were factors in terms of regrouping after the Olympics for the diminutive skater who trains in Moscow.

“Of course it is very interesting for me to be at international competitions as it is only my second season competing internationally,” she said. “At each competition, I am learning something new, so I’m very happy to be here. After the Olympic Games, it was obviously very difficult to come back to training. I spent a lot of emotion there, so to recover from all that in a short time was not easy.”

With the exception of an under-rotation on the back half of a triple Lutz-triple toe, Miyahara was otherwise solid in her expressive routine to Memoirs of a Geisha, racking up GOEs for all other elements. The four-time Japanese champion finished third with 74.36 (37.79/36.57) points.

“On the first Lutz-toe I got stuck, so it was not my best jump,” Miyahara explained. “I thought I could not get high points like today, but I’m really happy today with the performance.”

Like the other skaters, the two-time Grand Prix Final silver medalist took a few days off to rest her body before going back to training.

“Physically, my body is ready and mentally I’m very excited to come here,” said the 19-year-old. “Especially this year, physically, my body was not so strong at first. I tried to have some days off, more than before, and then rest my body and concentrate on recovering my body so after Nationals I could start to work harder and practice as usual.

Kaetlyn Osmond of Canada nailed her opening triple flip-triple toe, but received an edge call on a triple Lutz and had trouble with the landing of a double Axel. The defending silver medalist otherwise displayed good level 4 spins and footwork in her routine to “Sous le ciel de Paris” and “Milord,” placing fourth with 72.73 (36.53/36.20) points.

Canada’s Gabrielle Daleman earned a season’s best of 71.61 for sixth place after her routine to Carmen. The only flaw was an edge call on a triple Lutz.