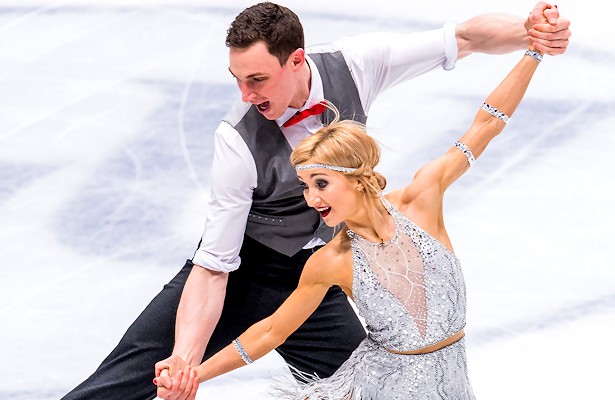 Aljona Savchenko and Bruno Massot of Germany perform to “That Man” at the 2018 World Figure Skating Championships.

Newly-crowned Olympic Champions Aljona Savchenko and Bruno Massot of Germany took the lead after the Pairs Short Program at the 2018 World Figure Skating Championships in Milan, Italy. Russia’s Evgenia Tarasova and Vladimir Morozov are in second, followed by Vanessa James and Morgan Ciprès of France.

Savchenko and Massot appeared refreshed and happy in their flapper-themed routine to “That Man,” earning a new personal best of 82.98 (44.14/38.84). Their upbeat routine featured a strong triple twist, side-by-side triple Salchows, and a throw triple flip. All elements received a level 4 with many positive grades of execution (GOE) and the reigning silver medalists currently sit in first.

“The goal was to do a clean short program, because that was missing this season,” Savchenko commented. “It is important for us to do our job. This is a new competition, it’s the World Championship. We are Olympic Champions, but the Olympics were yesterday. We put our Olympic gold medals aside and focused on this competition.”

“We skated exactly like we wanted and we can be happy to share this with the fans who came here to see us and didn’t have the chance to come to Korea,” added Massot.

Performing to “Piano Concerto No. 2” by Rachmaninov, Tarasova and Morozov showed an equally solid triple twist, followed by side-by-side triple toes and a throw triple loop. The two-time European champions finished a close second with 81.29 points.

“We are happy with our skate,” said Morozov. “In the last competition of the season and after the Olympic Games, it is very hard, but we are happy we can do our short program like that after this whole season. We are here to get revenge after the Olympics, definitely, but let’s see what happens tomorrow. We don’t think about it, we just do it.”

James and Ciprès gave a near-perfect performance to the bluesy tune of “Make it Rain” with the exception of a step out on the side-by-side triple Salchows by James. The 2017 European bronze medalists otherwise showed a strong triple twist, as well as a throw triple flip, earning a level 4 in all elements. They scored 75.32 points for third place.

“I was very positively surprised (to be in third),” said James. “It wasn’t a clean program, but we gave it all. We really fought for the program and we skated it with our heart from the beginning until the end. This score is our seasons’ best with mistakes, so this shows we’re able to skate with the ‘big kids.’ I guess,” James told the press.

“Honestly speaking, we had a bad preparation,” revealed Ciprès. “I injured my neck doing a lift in practice a week after the Olympics. I couldn’t skate for a week and a half, so Vanessa worked a lot by herself.

Natalia Zabiiako and Alexander Enbert of Russia currently sit in a close fourth (74.38) after their routine to Summer of 42′ which was highlighted by a solid throw triple loop. The team also showed a good level 4 lift, spin and footwork.

Italy’s Nicole Della Monica and Matteo Guarise had good start in their routine to music from Magnificat, landing solid side-by-side triple Salchows and a triple twist, however, Della Monica touched down on the throw triple loop. They sit in fifth  place (72.53).

The Pairs discipline will conclude with the Free Skate tomorrow.