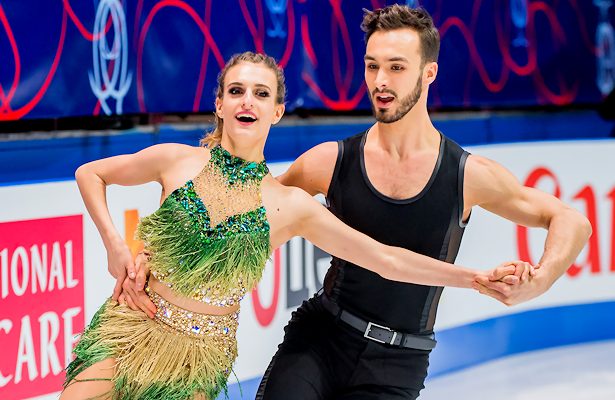 Gabriella Papadakis and Guillaume Cizeron of France established a new record score in the Short Dance to lead the ice dancers at the 2018 World Figure Skating Championships on Friday. USA’s Madison Hubbell and Zachary Donohue currently sit in second followed by Kaitlyn Weaver and Andrew Poje of Canada.

Papadakis and Cizeron were confident in their routine, however, they missed their first key point in the rhumba pattern and only earned a level 3 for that element. Nevertheless, the 2018 Olympic silver medalists earned a level 4 on all the rest, receiving no less than 2+ grades of execution (GOE) for a record-breaking score of  83.73 (44.37/39.36). Canada’s Tessa Virtue and Scott Moir held the previous record (83.67) from the Olympics last month.

“We had a really good feeling on the ice today,” said Cizeron. “It felt really special to be back in Milan after five years when we were here for Junior Worlds, and the crowd was amazing. We really needed to be supported today when the season has been so demanding, so it felt really good to have that support. We had a great time today and it feels really good to end the season on a note like this!

Cizeron changed back to the sleeveless top after the Olympics because “it’s just really really hot in here, and I like no sleeves just because I sweat a lot.”

“I feel like every year when you are listening to the same music over and over again every day for a whole season, it makes you want to move on to other music and another theme,” said Papadakis regarding next season’s short dance rhythm (tango). ” It has really been a pleasure to work on the Latin and we love both our programs, but we will also be very happy to change next season.”

When the team got back from Pyeongchang, Papadakis fixed a few things on her dress to ensure it wouldn’t break or open.

The French team feels they have already achieved what they could with their current free dance to “Moonlight Sonata.”

“We love this program,” said Papadakis. “It wasn’t easy to build and work on, but it was something we were really motivated for. Beethoven is a great composer and we really connect a lot with his music, especially this piece, so tomorrow will be another opportunity to perform in front of a competitive audience and I hope we can deliver a performance we are proud of. We are just very excited!”

Hubbell and Donohue currently sit in second after they topped their score from the Olympics with a new personal best of 80.42 (43.11/37.31). The 2018 U.S. champions met all key points in their pattern, earning a level 4 on all elements and many positive GOEs along the way.

“Many teams throughout this event achieved a season’s best which was wonderful to see,” said Hubbell, “especially after a demanding season and many of us coming off the Olympics not long ago. But Zachary and I definitely wanted to not just wait till Worlds, but go home after the Olympics and keep improving. We put out an incredible performance and we are very proud to achieve a clean protocol with all level 4s. We really feel we gave our best performance today and the crowd was wonderful so we are very happy.”

“I don’t think there’s been any magic secret to it,” said Donohue about improving since the Olympics. “We decided what we liked and thought we could improve on and we let our coaches drive us into the best shape. Our team knew just where to push and where to pull. Coming off our experience at the Olympic Games, we put our best foot forward with the program.”

Both ice dancers love the Latin dance but realize it’s not everyone’s cup of tea.

“It’s hard to listen to so many in a row,” acknowledged Hubbell, “but we enjoyed this season and loved this program. We have never done Tango together and we are interested in that challenge as it is a genre we feel will be good for us. It’s a passionate and powerful dance which we are really excited to explore.”

The team has been working hard to improve their speed and ice coverage.

“It’s been a process for the last three years after moving to Montreal to be able to perform with our natural power and let it glide across the ice,” noted Hubbell. “We’ve always been powerful, but we’ve not always had the grace and finesse you see from the other teams in Montreal. We have taken time to grow into that, but we are still a fairly new partnership compared to some. We are still hitting our peak and finding out who we are, and we feel it’s really coming together at this moment.”

Weaver and Poje were also smooth in their Bolero/Mamba routine, meeting all key points and earning a level four on all elements. They also bested their Olympic score with 78.31 (41.14/37.17) points for a third-place finish.

“This is our first time competing in Italy and we love it!” said Weaver. “We’re happy with today and can enjoy this feeling and this achievement, but we need to have so much focus for tomorrow and put everything in. It’s a bittersweet program that represents our souls on the ice, so that’s where our focus resides for now. We’re so happy today to not only skate a clean performance of the short dance, which has given us a lot of trouble this season, but more importantly, to skate for us and our dear fans. We’ve been through a lot in our career. We have won and lost and been through it all. To go out today and skate for the love of it and share that joy with people, is true success.”

Both skaters also like the Latin rhythm and this will be the second time they’ve done it.

“But we took a different avenue in 2011-12,” noted Weaver. “We like to embrace our versatility, we love to change it up and try different styles. I don’t know what awaits us next season, but we will get to try new things on the Stars on Ice tour. We are happy we got to do Latin again, but we are ready to move on.”

Their free dance to “Je suis malade” was actually suggested to them by an anonymous fan in 2011.

“I read the email first, but we hadn’t heard the song before, and the first time we heard it we fell in love right away,” said Weaver. “We considered some other versions, even a duet version, but there was nothing like the emotion she (Lara Fabian) has in her voice. We saw her live in New York a couple of months ago. The great thing was at Worlds in Nice, this fan was there, and he’s here in Milan too, so it’s a double full circle and just the way this program should end.”

“It’s funny it kind of feels like déjà vu,” said Poje regarding  resurrecting the free dance. “The first time that we thought it was the last time, it was bittersweet because it’s a program we enjoy training and competing because it feels connected to our souls. Going out there tomorrow, we want to be in that same moment and go out there being who we are and remembering why we love this program. It’s a joy to train on daily basis and we know our fans are behind us and we hope to do a good program one more time.”

Anna Cappellini and Luca Lanotte of Italy are currently in fourth with a personal best of 77.46 (40.44/37.02) for their Cha Cha/Rhumba. The team from Milan met all key points and earned a level 4 on all elements except for the partial step sequence (level 3).

“It felt great,” Chock said. “We had a lot of fun out there. This was definitely our best performance all year so it’s really nice to cap off the end of the season this way.”